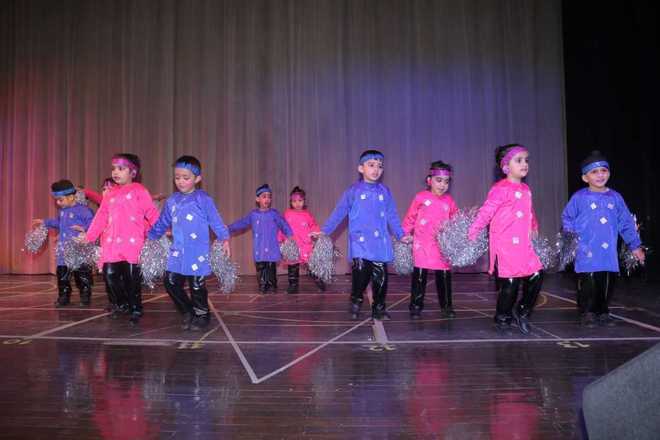 Students of Classes I to III of Tribune Model School, Chandigarh, celebrated ‘Song and Rhyme Day’. The objective was to inculcate good eating habits in students. Parents enjoyed their wards’ performance.

DAV Public School, Sector 8-C, Chandigarh, organised its alumni meet. Around 60 students from various batches attended the meet. The event began with ‘Gayatri Mantra’, followed by a friendly basketball match between the students. Fun games such as bursting balloons, musical chair were also held. Principal Jaskiran Harika was also present on the occasion.

Students of Shishu Niketan Model Senior Secondary School, Sector 22-D, Chandigarh, organised a function to bid adieu to their seniors. A cultural programme comprising dances and songs was presented by students of Class XI-A. A classroom skit on examination stress was appreciated by one and all. Harshita Bansal and Deepansh bagged the Mr Shishu Niketan and Ms Shishu Niketan titles, respectively.

Sports skills of tiny tots from pre-nursery to Class I were exhibited in the sports meet organised at Blue Bird High School, Panchkula. The meet was declared open by chief guest KK Sharda, Chairman of the Gandhi Smarak Nidhi, Punjab, Haryana, Himachal Pradesh and Chandigarh by lighting the sports torch. The event commenced with a colourful drill by students. Winners of events were awarded medals. The programme concluded with the singing of national anthem.

‘World Wetlands Day’ was celebrated through various awareness activities by the Shatavari Eco-club and Kindness Club of Government Model Senior Secondary School, Sector-38(West), Dadu Majra Colony, Chandigarh, in association with the Environment Society of India. Students were told about prominent wetlands of Chandigarh and Punjab through different activities.

Students of Sri Guru Harkrishan Senior Secondary Public School, Sector 40-C, Chandigarh, were shown a documentary on Janjira Fort (Maharashtra) by the CEWA (Centre For Education and Volunteer Action) on its premises. It was aimed at creating awareness and interest among students for historical and cultural heritage of India.