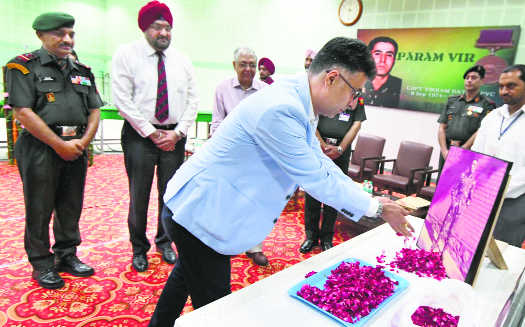 The range has been named as ‘Capt Vikram Batra, PVC, Shooting Range’.

Manpreet Badal, Minister of Finance, Punjab, unveiled the plaque of Captain Batra at the shooting range. He recalled the sacrifice of the martyrs in his speech. Badal urged the youth to take a pledge to fight against the drug menace, bribery, poverty and unemployment.

Vice-Chancellor Arun Kumar Grover said it was honour for the university to dedicate the shooting range as to the martyr.

The Vice-Chancellor said Captain Batra, a Palampur native, was an alumnus of the PU and stayed at Hostel No 1 on the campus. He pursued MA-English in 1995-96 after completing his BSc from DAV College in Sector 10.

Col Rajiv Kapoor said Capt Batra was passionate to serve his country, compassionate towards subordinates and bravest of all.