Over 110 Vivek High students bring to life The Addams family

CHANDIGARH:Students of Vivek High School, Mohali, presented a play, 'The Addams family', on their Founder's Day on their premises in Sector 38, Chandigarh, here on Sunday. 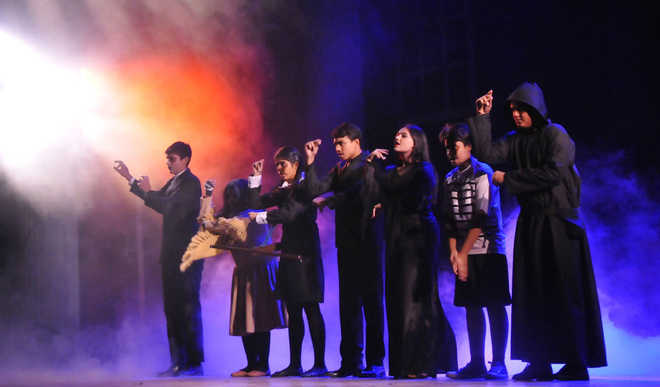 Students of Vivek High School, Mohali, presented a play, 'The Addams family', on their Founder's Day on their premises in Sector 38, Chandigarh, here on Sunday.

With a scintillating performance, 119 students bought to life 'The Addams family' , a fictional household created by American cartoonist Charles Addams, first aired on television in 1964 and featured as a Broadway musical.

Directed by Sukhmani Kohli, the play brings the humorous reversal of the ideal twentieth century American family, an eccentric wealthy aristocratic clan who delights in gruesome and are carefree of people finding them bizarre and frightening.

The story revolves around one fateful, hilarious night in which secrets are disclosed, relationships are tested, and 'change' is bought to the lives of the Addams family, something they managed to avoid for generations.

Speaking on the occasion, Nilu Sarin, vice-principal, Vivek High School, Mohali, said: "Vivek High School stands for overall development of every child. Holistic development goes far beyond just classroom teaching. Through such plays our teachers and students are working together to reach that goal through team work, integration, dramatization, singing, dancing, etc. Students absorb values such as leadership and team work through such activities."