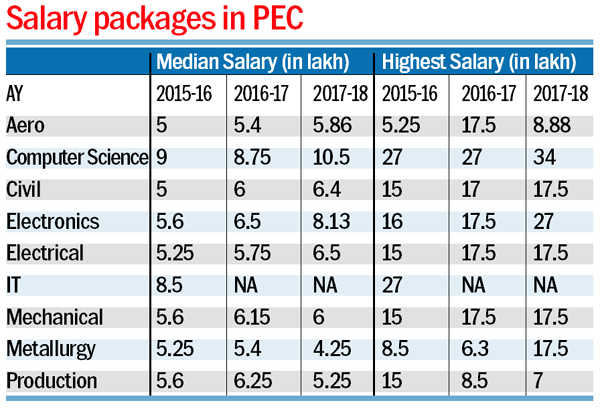 Punjab Engineering College (PEC), Chandigarh, has raised the bar again. It has posted a rise of 15 per cent in placements till December 20, though the process is still on.

The highest package in the history of the institute has been offered this year at Rs 34 lakh per annum by Arcesium to students of Computer Science and Engineering (CSE) while for the past two years it was Rs 27 lakh per annum.

Most disciplines experienced an almost 10 per cent increase in their median salaries, except mechanical, metallurgy and production streams, where highest packages have risen. Median is the middle salary when they are arranged in a numerical order.

The highest median salary increase was experienced by the CSE and the Electronics and Communication Engineering (ECE) by (20 -25%), Electrical Engineering (EE) (13%), Civil (7%) and Aerospace (8.5%).

“Career Development and Guidance Cell of PEC has been dedicatedly preparing students to meet their career aspirations, which has resulted from establishing networking connections and relationships between students, alumni, and potential employers,” said Dr Bansal.

University Institute of Engineering and Technology

The University Institute of Engineering and Technology (UIET) on the PU campus claims to have placed over 62 per cent students; around 250 students of the 400 eligible ones. The placements are still on.

“The highest package this year has been given by Adobe Solutions at Rs 20.35 lakh per annum while the average package is around Rs 6 lakh per annum,” said Prof Sarbjeet Singh, who is training and placement in-charge of UIET.

For the batch passed out in 2017, the UIET had 75.29 per cent placements with the highest package at Rs 8.4 lakh per annum and Rs 4.93 lakh per annum as average package. So, there is a rise this year.

Chandigarh College of Engineering and Technology

The Chandigarh College of Engineering and Technology (CCET), Sector 26, scored 41.8 per cent placements so far this year. Of the 208 students who are eligible, 87 have already been placed. Infosys has selected 59 students.

So far, the highest package in the current batch is Rs 7 lakh per annum and average package is Rs 5 lakh per annum. But placements are still going on.

“There is over 80 per cent placements in the computer science stream. Under principal Dr MS Gujral, the placements have risen. For civil and mechanical streams, companies such as Mahindra usually come in the 8th semester. As of now, we are at the end of the 7th semester. So, the percentage of placements and average package are set to rise further,” said Prof SK Singh, in-charge, training and placement, CCET.

The highest package in the history of Punjab Engineering College (PEC), Chandigarh, has been offered this year at Rs 34 lakh per annum by Arcesium to students of computer science and engineering while for the past two years it was Rs 27 lakh per annum.