PATIALA:With the arrival of monsoon season, the possibility of the cases of vector-borne disease have increased. 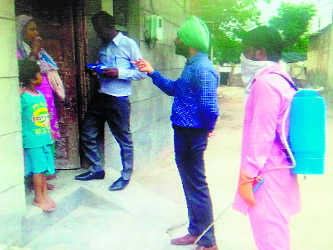 Health Department officials during a door-to-door drive to check breeding of larvae in Patiala on Monday. A Tribune photograph

With the arrival of monsoon season, the possibility of the cases of vector-borne disease have increased. However, the Health Department claims to have taken all possible measures to curb the spread, but the department feels that people of city can play a vital role in curbing the spread of such diseases. In fact, the department is seeking an active participation from the city dwellers.

Health experts say most of the dengue cases breed in accumulation of water inside houses. Dengue larvae takes seven to 10 days to become an adult, thus, if one refrains from stagnate water, the disease can be controlled.  However, this year, not a single case of dengue has been reported in the district so far.

Dr Gurmanjeet, a senior epidemiologist, said: “During our regular inspections to control the spread, we found that in most of the cases, breeding points were on the premises of the houses, especially on rooftops. So people should realise their responsibility. They should not let water accumulate in their houses.”

Last year, various preventive measures were taken by the Health Department, but yet they were unable to curtail the spread. In 2017, Patiala was on the second spot in the state with 2,434 positive cases of dengue.  Health Experts say, a female andes mosquito can lay as many as 150 eggs in a small cap of a bottle, therefore, people should take extra care in monsoon season. Civil Surgeon Harish Malhotra said no case of dengue was reported from the district so far.

He said people must look for those containers which can hold water. Such containers should be cleaned every week. By marinating cleanliness, larva breeding can be stopped. He said everything was under control in the district but, if precautions were not taken the problem could get aggravated.