Pig may come to rescue of renal failure patient: Experts

CHANDIGARH: In the coming five years, the kidney of pigs can be used to treat the renal failure patients. 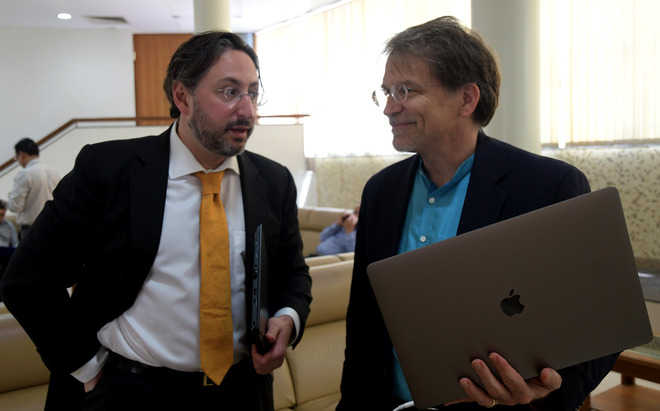 Prof Michael A Rees (right) and Prof Dorry Segev at the PGI in Chandigarh on Saturday. TRIBUNE PHOTO: RAVI KUMAR

In the coming five years, the kidney of pigs can be used to treat the renal failure patients. If the government will relax some of its guidelines, then a person sitting in the US can donate his kidney to a matching donor in India or vice-versa through global paired donation.

This was stated by experts during the mid-term meeting of the Indian Society of Organ Transplantation. The conference was to focus on the barriers in organ transplantation.

Replacing patient’s kidney with that of pig

Imagine a person suffering from renal failure no longer has to look for a donor or go through the series of dialysis to survive. The transplant surgeon will remove the kidney of a renal failure patient and replace it with the kidney of a pig. Michael A Rees, PhD Professor of Urology and Director of Renal Transplant from the University of Toledo Medical Centre, America, said it was possible with xenotransplantation.

Prof Rees was here to deliver a talk on xenotransplantation and paired donation. “It appears to be hypothetical, but considering the pace at which a team of doctors are carrying out the research in this regard, it may be a reality in five years,” said Prof Rees. He said the transplantation of a pigs’s kidney into would be possible by genetic engineering.

Professor KL Gupta, head of Department of Nephrology at the PGI, said: “In a country like India, there is a shortage of organ donors. Nearly two lakh people suffer from end-stage renal failure every year and 80 per cent of them die and only five to 10 per cent patients manage to get a transplant.”

No formal records of patients

Transplant in HIV and Hepatitis-C cases

Both Prof Rees and Prof Segev stressed on the need for global kidney exchange programme to meet the need for organs. In India, kidney donation should be legalised otherwise at the rate at which renal failure cases were rising, several people will die to due to lack of donors, said Prof Segev. In the United States (US), people willingly donate kidney. Over 50 percent of the kidney donors are not biologically related, said Prof Segev.

‘Sugar leading cause of renal failure’