Vultures bred at Pinjore set to take flight of freedom

PINJORE (HARYANA): Eight critically endangered white-backed vultures reared in captivity are set to take wings early next year for the first time in India since the vulture conservation centre, near here, was set up in September 2001. 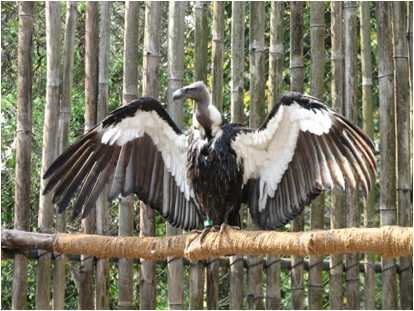 Eight critically endangered white-backed vultures reared in captivity are set to take wings early next year for the first time in India since the vulture conservation centre, near here, was set up in September 2001.

The Jatayu Conservation Breeding Centre on the edge of the Bir Shikargaha Wildlife Sanctuary is a joint project of Haryana and the Bombay Natural History Society (BNHS) with the British Government’s Darwin Initiative for the Survival of Species Fund to investigate the massive decline of three critically endangered Gyps species of vultures in India.

Six vultures reared in captivity and two rescued from the wild will be tagged with a 30-gram device for satellite telemetry each with a battery backup of three-four years. This will help in understanding their behaviour and survival instincts in the wild, said BNHS Principal Scientist Vibhu Prakash while talking to IANS here.

He said the vultures would be released most probably by March-April next year in the Bir Shikargaha sanctuary where the BNHS was working to declare it as a vulture-safe zone, which extends into Himachal Pradesh where the wildlife awareness among the villagers is quite high.

“If any of these vultures die or gets injured, we can recover it. Satellite telemetry will help us to know the cause of death and to prevent deaths of other vultures from that cause,” said Dr Prakash. The satellite tags will also be useful in knowing whether these birds are behaving normally in the wild with the other closely-related species.

In the first event of its kind in South Asia, the government of Nepal and national and international conservation organisations released critically endangered white-backed vultures in the wild on November 9, 2017.

India is home to nine species of vultures, three being white-backed, long-billed and slender-billed vultures, which have witnessed a catastrophic population decline of more than 90 per cent in the mid-1990s. The birds are now listed as critically endangered.

The vulture, a nature’s scavenger, cleans the environment of animal carcasses. Villagers rely on them to dispose of cattle carcasses.

According to biologists, the reason for vulture population reaching the brink of extinction in South Asia is mainly extensive use of diclofenac drug in treating cattle. Vultures that consumed the carcasses of animals treated with diclofenac died with symptoms of kidney failure. The Indian Government banned the veterinary use of this drug in 2006.

Dr Prakash said: “If there is no toxicity-related death of these eight birds in two years, then we will go for the release of 20-25 birds each year”.

“We are planning to introduce 100 pairs each of the three species of white-backed, long-billed and slender-billed vultures in the wild in the next 10 years. Before that, findings from the first batch proposed to be released will be crucial to the future programmes,” said Dr Prakash. The long-billed and slender-billed vultures will be released in Madhya Pradesh and Assam, respectively.

Officials admit the flight to freedom of these endangered vultures is still caught in red tape in the Haryana Forest Department, which has been authorised to procure 10 platform terminal transmitters or satellite telemetries through global bidding.

“These birds have been shifted to the pre-release aviary for over a year and a half. Their release was postponed twice last year. The only hurdle is the procurement of satellite telemetries and that too is bogged down by bureaucratic delays,” an official told IANS.

“The birds are now two to four years old and this is the best age group for their release. The delay in their release will definitely delay the vulture reintroduction programme,” he added.

Prior to this release, two captive Himalayan griffon vultures were released in the wild in June 2016 from the Pinjore centre on an experimental basis. Both birds were wing-tagged and leg-ringed for identification, but not tagged with satellite transmitters.

It was part of Asia’s first Gyps Vulture Reintroduction Programme under which birds bred in captivity were to be introduced in the wild.

The team managed to monitor one bird for a day before it disappeared while the second bird had been tracked for almost a month, and never sighted again.

The Pinjore centre, Asia’s first centre of its kind, houses 289 Gyps species of vultures, 198 of them bred at the facility that is funded by the Central Government.

Two such conservation and breeding centres are based at Rani in Assam and at Rajabhatkhawa in West Bengal. — IANS