China’s new missile is a wake-up call for India

AT China&rsquo;s National Day Parade on October 1, the military might of the People&rsquo;s Liberation Army (PLA), in full display, was watched closely by the world. 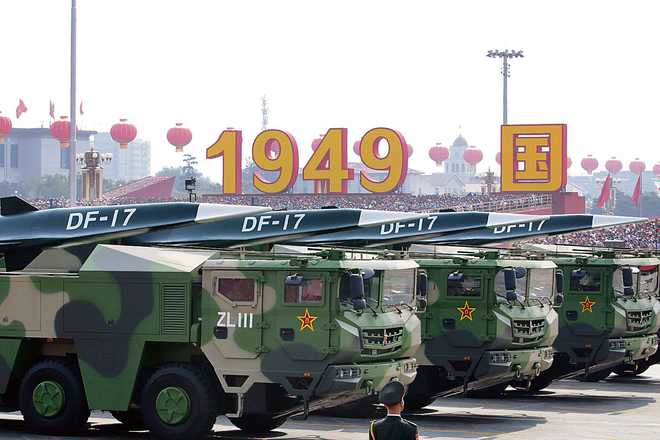 Cutting edge: Hypersonic missiles will be the new disruptive game-changing technology in this century.

AT China’s National Day Parade on October 1, the military might of the People’s Liberation Army (PLA), in full display, was watched closely by the world. The commander-in-chief of the PLA, Xi Jinping, inspected the parade which featured 15,000 troops, 160 aircraft and 600 pieces of equipment.

What caught the attention of discerning observers were the new missiles which are a part of the 2016-raised rocket force (People’s Liberation Army Rocket Force, PLARF): The Dongfeng DF-41 Inter-Continental Ballistic Missile (ICBM) with a range of 15,000 km, travelling at seven km per second, approximate speed Mach 20 (Mach is the speed of sound), and 500 meters accuracy; the Dongfeng DF-100 hypersonic cruise missile; and the Dongfeng DF-17 medium range ballistic missile fitted with Hypersonic Glide Vehicle (HGV) — DF-ZF — with a range of 2,000 km.

While western analysts focused on DF-41 ICBM, which would play a critical role in strategic counterbalance, deterrence and in winning war, for India, the DF-100 and DF-17 fitted with HGV — DF-ZF — should be a cause of concern. Hypersonic missiles will be the new disruptive game-changing technology in this century which would — between India and China — replace nuclear deterrence with non-nuclear deterrence, reshape the rules of conventional war-fighting and transform geopolitics. Only three countries — the US, Russia and China — have made credible strides in procuring, harnessing and

Hypersonic missiles are radically different from ballistic and cruise missiles. Ballistic missiles boosted by powerful rocket engines leave the atmosphere (the dividing altitude between atmosphere and space is 100 km) to enter space, reach the apogee and then re-enter atmosphere to hit the designated target. These missiles follow a defined elliptical trajectory, which helps the Ballistic Missile Defence (BMD) system to intercept and neutralise their warhead before it causes damage. The US since over four decades has invested heavily in BMD systems. Inspired by it, India too has invested in indigenous BMD since 2000.

Cruise missiles stay within the atmosphere, fly at low altitude to evade ground-based radars, and are powered and guided throughout the flight in a defined near-flat trajectory until its designated target. Cruise missiles powered by air-breathing jet engines have sub-sonic speeds, except India’s BrahMos missile, which powered by ramjet engine, has a supersonic speed of Mach 3. To defeat cruise missiles, there are technologies like the Russian S-400 Air Defence Missile System (ADMS), amongst others.

Hypersonic cruise missiles with two peculiarities are a class apart. One, they have speed upwards of Mach 5 — their kinetic energy (derived from motion) itself is enough to destroy hardened and underground facilities.

Two, they fly at low altitudes, though higher than cruise missiles, and are difficult to detect by terrestrial or land-based radars because of their ability to change course rapidly. Unlike ballistic and cruise missiles which follow a defined trajectory, hypersonic missiles are highly manoeuvrable, thereby giving very little reaction time to the opponent to judge which target is being hit. This delayed detection makes timely response extremely difficult.

HGV are fitted on ballistic missile rocket engines like DF-17, DF-21, DF-26 and even DF-41 ICBM and boosted. After a certain boost phase, the HGV detaches itself from the rocket and glides towards its target 2,000 km away in a wayward rather than a defined low flight trajectory.

Senior officials from Raytheon Company of the US recently told this writer at an international air show that meeting the hypersonic cruise missile challenge would require new sensors for early detection. Since terrestrial sensors alone would not work, the need would be to have a mix of space-based and terrestrial sensors. The entire hypersonic missile defence architecture, they said, would require huge investments, patience, technology and technical expertise.

Given the new missile’s characteristics, the DF-100 and DF-17 with HGV in PLA inventory would be a powerful asymmetric capability. For instance, it would be a national humiliation if the HGV were to hit and destroy India’s aircraft carrier. Since India — familiar with PLA’s nuclear weapons inventory — is unlikely to raise the stakes, China’s new deterrence as well as disruptive war-fighting capability would reside in its useable non-nuclear HGV. India’s nuclear weapons, purportedly delivered by its submarines, Agni series ballistic missiles, and aircraft, would, on the other hand, be rendered useless against China.

Such a possibility deserves an urgent review, both of India’s nuclear deterrence against China, and the indigenous BMD, which despite the infusion of huge funds has, unfortunately not demonstrated satisfactory results. In 2011, the then Defence Research and Development Organisation (DRDO) chief, VK Saraswat, had spelt out the timelines to this writer for the accomplishment of the BMD programme. He had said that by 2013, phase one of the project, which involved successful interception of hostile missiles with 2,000-km range, would be achieved. Phase two of the programme, which required neutralisation of 5,000-km range ballistic missiles, would be done by 2015, the same year when the ballistic missile shield would become available for impregnable defence of the capital city of Delhi, and major metropolises. The purchase of five units or regiments of Russian

S-400 ADMS in 2016 is evidence that Saraswat was doing kite-flying.

Even the military should take its portion of the blame. Many DRDO scientists have told me that the military leadership, unable to find or understand operational employment of hypersonic missiles, has shown little interest in their presentations. With PLA having showcased these missiles, the Defence Minister ought to take the bull by the horns. A way forward is to seek Russian cooperation through the successful BrahMos supersonic cruise missile programme. Given that BrahMos is India’s most successful defence programme, has consistently met its timelines, has been accepted by the three defence services, and has generated employment and wealth, it could be the ideal vehicle for the development of hypersonic cruise missiles and strengthening bilateral relations between India and Russia.