China sitting on a tinderbox in Xinjiang 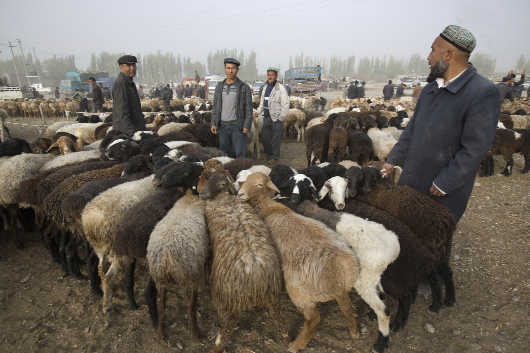 Uyghur traders at a Sunday livestock market in Kashgar, Xinjiang. In the province, the majority Uyghurs (46.4%) aggressively jostle with Han (39%) to practise, preserve and perpetuate the Uyghur identity and relevance. Photo: Thinkstock

China has been a cradle of religio-cultural diversities that were historically tolerated by the various ruling dynasties who claimed the ‘mandate of heavens’ to shape the overarching traditions, philosophies and cultures as opposed to the rigidity of a formal and definitive religion. However, since the Communist Party of China’s reign in 1949, Mao Zedong initially suppressed all expressions of societal religiosity, only to see a certain liberal acceptance of religious autonomy in recent times, as long as it didn’t conflict with regime survival.

Amidst a total population base of 1.4 billion, an estimated 1.7 to 2 per cent are of the Islamic faith (approximately 25 million). In addition to the majority Han population (91.6%), the Chinese government officially recognises 55 ethnic minorities (8.4% of population), of whom 10 are predominantly Sunni Muslims. Old manuscripts claim the advent of Islam to the 620s when Sa’d ibn Abi Waqqas, uncle of the Islamic Prophet, supposedly came to China on a mission and established the Huaisheng Mosque, over 1,300 year ago.

Broadly speaking, there are two distinct groups of Islamic adherents in China – the majority Hui people (who are similar to the majority Han Chinese in terms of ethnic-lingual profiles, spread across China) and the more restive Turkic ethnicity based Uyghurs, who are concentrated around the Xinjiang Autonomous Region.

Interestingly, official Chinese cartography encompasses the Indian territory of Aksai Chin, within the Xinjiang Autonomous region – affording it borders with India, Pakistan, Afghanistan, Kazakhstan, Kyrgyzstan, Tajikistan, Mongolia and Russia. Within the cauldron of Xinjiang, the majority Uyghurs (46.4% of population) aggressively jostle with Han (39% of population) to practise, preserve and perpetuate the Uyghur identity and relevance.

It is the forbidden lands of Xinjiang that test the Chinese regime’s stranglehold over the global Pan-Islamic wave of puritanical militancy and secessionist tendencies – often, resulting in violence, popular unrests and hidden fissures that are kept away from the glares of the world. Chinese absolutism is practised to ensure the lid is kept on the region’s simmering dissent by the Uyghurs. However, the Chinese government’s Uyghur-specific discrimination has resulted in further alienation and hardening of the Uyghur Muslims and their causes of separatism.

The famed Chinese ‘strike hard’ approach against the ‘three evils of separatism, extremism and terrorism’ has clearly divided the Islamic adherents into two groups – one of the ‘patriotic Chinese Muslims’, i.e., Hui people (they have no secessionist group or tendencies), who are allowed to practise their faith and beliefs, and the other of the discriminated Uyghur, who pray in different mosques from the Hui, and who have East Turkestan Islamic Movement (ETIM) as the main secessionist group to form an independent ‘East Turkestan’.

The divide-and-rule of the Chinese government is clinically effective with the Hui Muslims seamlessly integrated into the Chinese mainstream. The taint of Islamic terror and fundamentalism is restricted to the Uyghurs. Usual tactics of repressive security cover to blank out news, demographic resettlements of Hans and the economic discriminations have increasingly marginalised the Uyghurs and therefore turned Xinjiang into a veritable tinderbox.

The footprint of the ETIM is visible from the cadres operating in Afghanistan (where they were trained by Al Qaida and 22 of them were arrested and detained in Guantanamo Bay), Pakistan (where they attacked Chinese engineers in the port city of Gwadar) and even in the ongoing conflict in Syria-Iraq, where the Uyghur cadres are seen fighting along the Al-Qaida affiliate, Nusra Front.

However, the ETIM (or Turkistan Islamic Party, as they call themselves) have been designated as a terrorist group by the US under Executive Order 13224 (blocking financial transactions) and the US Terrorist Exclusion List (which debars members from entering US). This terror designation is further confirmed by the UN, UAE, Afghanistan, Pakistan, Russia, Kazakhstan, Kyrgyzstan and obviously China, thereby squeezing and limiting international support and funding. But, they have competing baiters amongst the ISIS, Al-Qaida and even the Taliban who empathise with the Uyghur cause and recruit their foot soldiers, arming and training the frustrated Uyghurs to the ultimate consternation of the Chinese.

Strategically for China, the import of Xinjiang unrest goes beyond the fears of Uyghur Islamic fundamentalism and militancy – it also tests the Chinese ability to cover its intrinsic fault lines in Tibet, Inner Mongolia and Taiwan, each of which has its own secessionist rationales against the mainland-Han Chinese rule. It forces doubts in the minds of the Chinese strategists and policy planners to invest in a restive area that is the principal highway of the strategic China-Pakistan Economic Corridor (CPEC), as indeed the gateway to the energy-flush Central Asian Republics that are key to keep the Chinese engines of economic growth running.

So far, heavy boots on ground and providential international environment of most countries clamping down on terror groups has spared Xinjiang from going completely out of control, though over 200 acts of terrorist strikes have been attributed to the ETIM. There is no visible or credible Chinese governmental effort to economically or socially try and integrate the restive Uyghurs. On the contrary, it is the sole ‘strike hard’ approach, bereft of any inclusive imperatives, that is getting deployed and the same has diminishing returns in the modern era, especially for a religious movement and insurrection that knows no official border or emotional appeal amongst the adherents across the globe. Its appeal is theoretically more readily available than say for a Tibet or Taiwan that is restricted to its constituents, beyond a point.

Xinjiang is the underbelly of a glaring Chinese reality that potentially posits the duplicitous Chinese stand of vetoing against India in the UN forum towards Indian efforts to designate Maulana Masood Azhar as a terrorist, as the Chinese still feel comfortable to egg on the Indo-Pak game of cloak and dagger as a willing accomplice of Pakistan. Though like Pakistan, which self-admittedly is atoning the sins of supporting fundamentalism, this is Chinese augury for chickens to come home to roost in Xinjiang. The dynamics and intrigues of international diplomacy may force the wary Western powers and the other stakeholders to recognise the tactical utility of the Xinjiang unrest as a counter-check to Sino aggression, duplicity and hegemony in the region.

The writer is former Lt-Governor of Andaman and Nicobar Islands, and Puducherry.