I don’t like hardline Islamic preachers like Zakir Naik. But how about mobs who go around terrifying Indian citizens in the name of the holy cow? 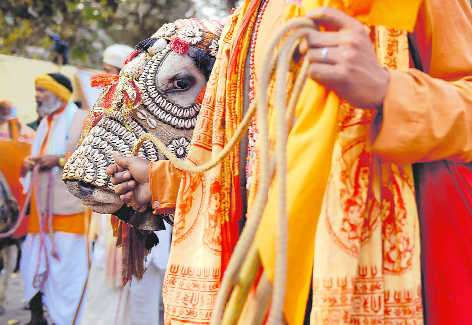 We’ve had the most heated debates over terrorism and individuals described as terror sympathizers over the past few weeks. I don’t like hardline Islamic preachers like Zakir Naik and at the cost of getting a lot of threats (including some from “Islamic warrior” type social media accounts in Pakistan) have made my positions clear. By now, many who had no clue about him or what Naik preaches would have checked him out on social media. He preaches an intolerant, vile version of Islam that is also followed by most terrorist organizations the world over, but that in itself does not make him a terrorist.

Terrorism means the unofficial or unauthorized use of violence and intimidation in the pursuit of political aims. By that definition aren’t the mobs who go around terrifying Indian citizens in the name of the holy cow, also terrorists? To the best of my understanding, most of the gau raksha samitis are also in pursuit of clear political aims such as establishing a Hindu rashtra. There are now thousands of such people lurking around looking for live or dead cows and human beings to kill or thrash, emboldened in the belief that forces favourable to them are now in power. I believe they present a clear and present danger to our society and that we are under-reporting their activities.

When the first human lynching in the name of cow took place in Dadri, Uttar Pradesh, last year, it created a national furore. Now that the novelty factor has gone, it seems that we have just accepted such horrors as par for the course. So many incidents have taken place since them but they do not make headlines or topics for prime time debates. For instance, it barely created a ripple in March this year when in Jharkhand a cattle trader and a young boy accompanying him were beaten to death, rags stuffed into their mouths and then their bodies hanged from a tree. The picture of the corpse of 12 year old Inayatullah Khan swinging from a tree still haunts me. But I do not remember any national outrage over the horrible death of this child.

The cases where humans have been murdered over cows still merit a small story. But there are numerous incidents of intimidation, threats and beatings of people who are moving live cattle or transporting or working with dead carcass. They don’t make the news. FIRS are not even registered presuming some victims pluck up the courage to register them. Most of the time, the victims just flee, after the humiliation and terror they have been subjected to.

Last week an incident took place that should make us hang our heads in shame. It was reported and circulated on social media. In fact, the ugly episode was actually recorded and anyone can watch the video grab. It was covered in all the national dailies but it did not generate the kind of outrage that we witnessed during Dadri. Briefly, here are the facts. Seven members of a family were stripped and thrashed for skinning dead cows in Gir Somnath district of Gujarat. They were all Dalits in an area where skinning cattle carcass is their traditional occupation.

Here’s what the video shows. Four men are stripped down to their waists, their hands tied with ropes that connect one to the other like some sort of medieval slaves. Except that they are lined up against the back of a car. In the video clip I saw three different men, prosperous and paunchy in comparison to the slender bodies they are beating, take turns in wielding a large rod. It was a perverse and sadistic display of power and savagery.  The fact that the victims were Dalits is also notable, for the incident displayed not just the sort of hate that is reserved for minorities but also the swagger of social domination that the cow vigilantes displayed. Now that we are again headed to more elections, if I were Mayawati, I would circulate this tape of patent caste oppression against Dalits in Uttar Pradesh while the AAP could do so in Punjab.   All of us who covered the 2004 general election that ended in a shock defeat for the NDA would remember that one of the tactics Lalu Yadav employed in Bihar was to circulate in every village, images of a man with his hands folded, tears in his eyes, begging for his life during the 2002 Gujarat riots (his name was Qutubuddin Ansari and he would survive). In a post mortem the late Pramod Mahajan and Atal Bihari Vajpayee would say that the images of Gujarat worked against them elsewhere.

Beyond the political implications of anti-Dalit actions of the faithful, nationally, all of us should demand a clear (and not vague) condemnation from the BJP’s national leadership. Just as we seek solutions to radicalization and terrorism, let’s start seeking a national solution to the growing power and terror of the cow vigilantes.