Dastaar, or turban, is the pride of the Sikh community — a symbol that sets it apart; a symbol of honour, courage, and reverence for the Sikh Gurus and their teachings. 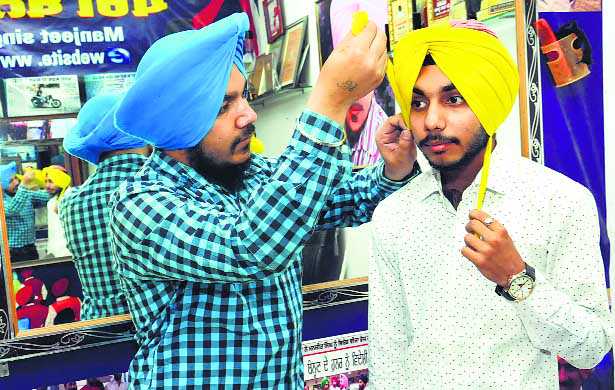 Manjit Singh Ferozepuria teaches a youth how to tie a turban right.

Dastaar, or turban, is the pride of the Sikh community — a symbol that sets it apart; a symbol of honour, courage, and reverence for the Sikh Gurus and their teachings. Tying the traditional 8-metre turban needs a deft hand, as the soft muslin is swiftly folded and neatly pleated around the head. The younger generation of Sikhs, especially in foreign lands, is not familiar with the technique; the reams of cloth can be challenging. And this is where Manjit Singh Ferozepuria comes in, to lend a helping hand.
A turban wizard, Manjit Singh can tie his turban blindfolded, precise to the minutest details, in 22 seconds flat. Not just that, blindfolded, he can also tie a turban on another head.
What pushed Manjit Singh to it, however, has its genesis in an unpleasant experience. “It happened one day when I was in college in 2010. A friend, Baljinder Singh, poked fun at me while I was tying my turban before rushing for the classes. He called me a paindu Yankee (villager attempting to look western). I was deeply offended, following which we had an animated discussion on the legacy behind the turban as a symbol, bestowed by the 10th Guru, Guru Gobind Singh, on the Khalsa Panth,” says Manjit Singh, who is much-sought-after by the Indian community abroad to teach their children the art of tying a turban.
“I went through a lot of inner turmoil. I thought I should do something to carry on the legacy of dastaar as a symbol of spirituality and self-respect. I quit studies after my graduation from DAV College, Bathinda. There has been no looking back. I got a lot of local support from youngsters who were interested in carrying a neat look. I made my passion, my profession. Ironically, I also tied the turban of Baljinder Singh on his wedding,” chuckles Manjit Singh.
Hailing from Malluwala village in Ferozepur district, 25-year-old Manjit has been holding such classes in Singapore and Malaysia to teach Sikh youths how to tie a turban. He will be travelling to Europe this month to hold workshops in various countries. A whopping 7.8 lakh follow him on his Facebook account. “People these days,” says Manjit Singh “are experimenting with their turban, unlike earlier times when the shape of a turban was associated with particular communities.
There are nearly a dozen ways to sport a turban. I am good at Pochvin, Patiala Shahi, Amritsar Dhamala, Chand Tora Dhamala and Patka Keski styles. I get requests for weaving the knots for the headgear of Hindu grooms as well, besides requests from youths to give them the ‘Bhagat Singh look’ on special occasions.”
Manjit Singh hogged headlines in local newspapers when he tied a turban straddling two motorcycles during the  international kabaddi match hosted by the Punjab Government in 2013. For this, the crowd gave him a standing ovation. Manjit Singh has also taught Anantbir Singh, son of Punjab Deputy Chief Minister Sukhbir Singh Badal, how to tie a turban.