Khushwant Singh Litfest and challenges in holding it

It began as a lark. We were in Kasauli, a hill station in Himachal Pradesh, not too far from Chandigarh. I have a family home there. My late father, Khushwant Singh, loved the place and did much of his writing in Kasauli. 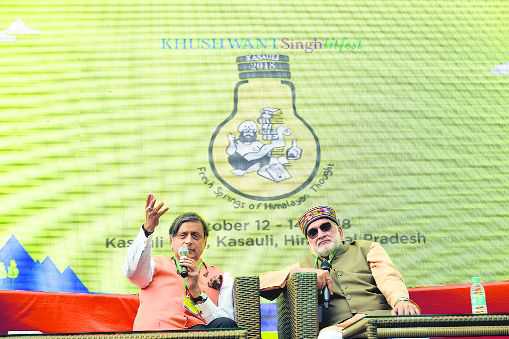 It began as a lark. We were in Kasauli, a hill station in Himachal Pradesh, not too far from Chandigarh. I have a family home there.  My late father, Khushwant Singh, loved the place and did much of his writing in Kasauli. He would take long walks all over the region, often using the short-cut, from the Kasauli bazaar to the foothills town of Kalka, a distance of some 10 kms. It has now been officially named as “The Khushwant Singh Trail” and has a board at its start, showing the many kinds of birds a walker may encounter on it. The trail was inaugurated a couple of years ago by the then Himachal Chief Minister, Virbhadra Singh.

Returning to the “lark”, my long-time companion, Niloufer Bilimoria, asked the then Brigadier (now a Major General), in charge of the Kasauli cantonment, Anant Narayan, how would he react to a literary festival named after Khushwant Singh (who was very much alive then, though too frail to make the journey from Delhi to Kasauli) in Kasauli? Anant was excited by the idea and said he would extend full support to it and that the magnificently-restored Kasauli Club — after it was almost entirely destroyed by a fire — would be the perfect venue. The Club has a spacious open-air terrace, a stage at one end, and a glorious view of the valley below, leading to the plains and Chandigarh in the distance, to boot. It was June and we started thinking of holding the Litfest in October the following year, just after the weekend of the Sanawar School’s Founder’s Day. The school is located on a hill adjoining Kasauli.

“Why next year?” asked Brigadier Anant. “Do it this October.” That’s how the Khushwant Singh Literary Festival (KSLF) began, seven years ago. It was the first Litfest in Himachal and also the first to be held in a military cantonment. It has put Kasauli on the literary map of India and made the club famous. But without the unstinting support of succeeding brigadiers, it would not have been possible.  Since then, there have been a plethora of litfests all over the country. But I am proud to say that the KSLF is the only surviving one in Himachal, as well as the longest-running — eight consecutive years.

There is one exception, however — the “Jaipur Literary Festival “ (JLF), the big daddy of all Indian litfests. It set the benchmark and I doff my hat to them, particularly to Sanjoy Roy, its moving spirit. He raises the funds, and the amount runs into tens of crores. Thousands attend the JLF. From there, it has spread to various parts of the globe, making it an unofficial, yet extremely effective, cultural ambassador for India. I met Sanjoy a few months ago at the London version of the JLF, held at the prestigious British Library. “Where to next?” I asked him. “Belfast”, he replied. “Why on earth Belfast!”

I exclaimed, associating that city with the Irish troubles. “Because they invited me to hold a litfest there,” was his matter-of-fact laconic reply. So, Belfast it was for the JLF.

Returning to the KSLF, we decided that it would centre around some of the passions and concerns of Khushwant Singh, and would be dedicated to the education of the girl child, the Indian soldier, and the preservation of the ecology of the Kasauli region — causes dear to Khushwant Singh. His love of Urdu poetry and the importance of humour in our lives were two other characteristics that were an essential part of him. He was not a political animal and could be quite naïve, like in his support for Indira Gandhi’s “Emergency”. But he spoke and wrote from the heart, and his readers and listeners respected and loved him for it.

Partition had a profound effect on him. He lost his beloved and beautiful Lahore home. Partition embittered many Indians who suffered, making quite a few of them haters of Pakistan and anti-Muslim. With Khushwant Singh, it had exactly the opposite effect: a burning desire to improve ties between the two nations. Hence, a primary objective of the KSLF was to invite prominent Pakistanis to Kasauli, to interact with some of the finest Indian minds that were on the same page as the Pakistanis. Those sessions attracted the largest audiences at our Litfest. Indians were listening to Pakistanis who had bravely put their lives on the line back home. Imagine the goodwill they must have taken back to Pakistan! In its own small way, the KSLF was carrying out a veritable “track two diplomacy”. Sadly, that fruitful exchange of views ended three years ago, as relations between the two countries deteriorated.  Pakistanis found it difficult to get visas for such Litfests, and vice versa.

Getting Pakistanis to Kasauli apart, the biggest challenge KSLF constantly faces is getting enough funds to make the event possible. We don’t pay any fee to our speakers, only their travel costs and accommodation.  Yet, Kasauli has been graced by leading film stars, celebrities, and intellectuals. This year, the list of speakers includes Sharmila Tagore, Manisha Koirala, Shabana Azmi, Dr BN Goswami, Javed Akhtar and Tavleen Singh. We don’t charge any admission fee. So, welcome to the 8th Khushwant Singh Lifest, starting at 11 am on October 11. And if you can help us get more funds - we have tax-free status — and sponsorships, you are doubly welcome. And do visit our website kslitfest. com.

—  The writer is a veteran journalist