Living the American dream, are they? : The Tribune India

Living the American dream, are they?

The diaspora portrayed in India (aka Bollywood) used to be quite binary until recently. 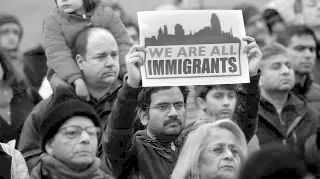 The diaspora portrayed in India (aka Bollywood) used to be quite binary until recently. Either the protagonists were in the very low income bracket (primarily taxi drivers or restaurant staff) or, they are the Mittal and Advani equivalents — owning almost, as if possible, entire states in the US. The middle tier (doctors, lawyers, and professionals) was missing out in this narrative until recently.

Ironically, it is this middle tier that is known and thought of when the US considers Indian (and the broader Asian) diaspora, namely the ‘model minority’. Intended to suggest with no effort of being implicit that minorities (and by some interpretation immigrants) are expected to behave in a certain way, and hence, generating a range of controversies. The model minority is essentially the US population group in mostly white-collar professions, with a high level of literacy, away from crime and drug statistics, earning well over the US median income. They essentially are thought to be checking off the ‘American dream’ boxes — from home ownership to job security — better than other racial/ethnic groups.

There is a plethora of analysis diving deep into why Indians are highly successful in the US. Some often go far and deep into making assertions of why they are successful overseas when not back home (e.g. Psychology Today, 2018). Most of them present a pre-selection process that filters only the educated and high performing, relatively well-to-do with network and support system back home and abroad, and from higher social (read caste) strata into the US from India.

But this misses the part of the story that Bollywood didn’t miss — of the Indian diaspora not in high-skill jobs. They are 7/11 shopkeepers, Super 8 managers (and even owners), eyebrow thread-ers in New Jersey, Los Angeles, and other cities, taxi drivers, restaurant workers, bus drivers, nannies and helping hands in Silicon Valley. Although recent changes tighten the criteria to further filter in only highly educated, STEM intakes, the other Indians exist and will continue to exist. And the gap between the two is wide.

The income gap within the Indian-American community is the worst in the US. The gap in earnings between the top 10 per cent and bottom 10 per cent is over 10 times. And the gap is widening. Pew research data has reported that this divide surpasses that in any other population groups in the US, including Whites, Blacks and Hispanics.

It’s probably not a surprise to know that the widening of the gap mirrors the same trend back home in India and the trend worldwide. However, factors above and beyond worldwide income inequality play into the gap being the highest for Indian diaspora in the US. From immigration policies (family reunification visas and permanent residency policies to the two immigration Acts mentioned above, which led to an influx of lower skill vs high-skill groups in distinct waves) to intra-national distinctions, India is known for (region, caste, economic) carrying over.

The narrative that speaks only about the ‘model minority’ and the ‘wealthiest immigrant community’ causes two kinds of harm, no matter how flattering it might sound. It fails to take into account and, therefore, bring to the forefront the issues faced by the lower income segment. It also pits one immigrant community superficially against another here in the US (Hispanics vs Indians/Asians for example) while many work shoulder-to-shoulder at the grassroots level with no distinction.

We asked Nisha (name changed) how she felt about her ‘model minority’ tag by virtue of her Indian origin and ‘natural’ association with the concept of high earning. Mind it she commutes for more than three hours daily to work for a minimum wage at a Manhattan parlour. However,  Nisha expressed no disdain, just concern, and hope. She was concerned to comment on the topic for the fear of coming on the radar in the current climate but was hopeful that getting their stories on the forefront will be more invested in goodwill towards their poorer counterparts, if not anyone else.

Even though numbers are fewer, folks with minimal resources, less network, lesser education, have come to the US from India over the decades. The engineers and CEOs might create the ranks and files of Silicon Valley but they provide the services to keep their homes and lives running. The current government and the ever-tightening immigration policies might cause their number to lessen, but it will not go down to zero.