Oscar-nominated Canadian filmmaker Deepa Mehta’s flick Beeba Boys, the only movie to have brought the spotlight on Punjabi gangsters in North America, may have got acclaim, but it doesn’t strike a chord with the Canadian police. 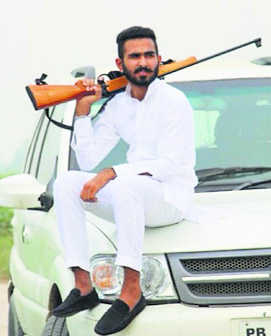 Rankirat Singh, 20, of Brampton, is wanted in an assault case. Courtesy: Facebook

Oscar-nominated Canadian filmmaker Deepa Mehta’s flick Beeba Boys, the only movie to have brought the spotlight on Punjabi gangsters in North America, may have got acclaim, but it doesn’t strike a chord with the Canadian police. Violence perpetrated by Punjabi gangs remains a hard reality in Vancouver, Surrey and Brampton today. Bringing professions like trucking and transportation, largely run by Punjabis, under the radar of law enforcement agencies.

The annual report of the Canadian police ranks Indo-Canadian gangs at No. 3, in terms of strength in British Columbia, only behind the notorious biker gangs and Asian criminal organisations such as the Triads and Vietnamese drug clans. Punjabi mafia groups include the Dosanjhs, Johals, Adiwals, Buttars, Dhaks, Duhres, Grewals and many more. Some have become dormant over time, while others have been active since the 90s. Gangs like Red Scorpions, Hells’ Angels, Independent Soldiers and United Nations, have members from all ethnic groups; but the immigrants, of whom Indo-Canadians form a major chunk, comprise a sizeable part of these.

Gangs thrived as they were seen as protectors by locals. Pape Avenue in downtown Toronto used to be the hub of the Punjabi community till four decades ago, before the community spread its wings to Brampton and Mississauga. Mehtab Singh, who came here in the 1970s, says: “At Pape Avenue we used to have a shelter home for Punjabis. Anyone coming here would first come to this place and stay here for a few days, before making his own arrangements. I remember how locals used to harass us here. Once we took them head on. It turned out to be a bloody fight between us. From there, they started respecting us. But some of our own saw an opportunity in this to make profits.”

“Many of these men often used family connections in Punjab, targeting young and vulnerable unemployed youth, to increase their influence here,” he says.

Over the years, Punjabi gangs have grown in size. As many as 165 men have lost their lives in gang wars here since the 1990s. Bindy Johal, the first major Punjabi-Canadian crime boss, was behind the dreaded “The Elite”, a death squad, which reportedly committed at least 30 murders. One high-profile killing carried out by this squad was that of the Dosanjh brothers, Ron and Jimmy.

The Dosanjh brothers are believed to be among the first organised Indo-Canadian gangs in Vancouver in the early 1990s. Johal, too, met a bloody end in 1998 at the hands of Bal Buttar, his former associate. Buttar, too, was attacked, though he survived. As drug and extortion cartel thrives here, many more powerful gangsters have followed since.

Canada’s Defence Minister Harjit Singh Sajjan has been making frantic appeals to the youth to choose military over gangs. His biography mentions that as a teenager, he drifted onto a troubled path. “One schoolmate was Bindy Johal, who became a notorious gangster and was gunned down on the dance floor of a crowded Vancouver nightclub in 1998, at the age of 27. I was saved from the trouble in my youth by good mentors.” Sajjan immigrated to Canada in 1976 and grew up in Vancouver. He went on to become a detective with the Vancouver Police.

Families in a bind

Twelve-year-old Sahil (name changed) and her nine-year-old sister live with a burden that is rife with stigma, pain and shame. Their parents have been behind the bars for last two years. It started when Parminder Singh bought a truck a few years ago and the lure of making quick bucks got him into the smuggling business. His trip to New Jersey in the US was cut shot as the police intercepted him with drugs on the US-Canada border. His wife was accompanying him on that fateful day. Both are likely to spend a few more years in the prison.

“Few would like to talk about these issues. A substantial number of families are behind the bars and their kids are at the mercy of either relatives or the government. On career front children don’t suffer. However, I wish the parents had behaved maturely,” says Calgary-based activist Baljinder Singh.

On the condition of anonymity, a police officer of Punjabi origin in Brampton says: “Trafficking of heroine and synthetic drugs coming from India remains the main trade. No doubts many gangs are also smuggling it from Mexico and selling to other countries. Over the years they have widened their net and got into money laundering, kidnapping, extortion, etc. They have brought a bad name to the local transportation business, as many a truck driver has been caught with cocaine and hashish.”

Even as Justin Trudeau Cabinet tries to find solutions, the Canadian Senate recently passed the Cannabis Act, legalizing recreational marijuana. It created a blueprint for other countries looking to do the same. However, the United Nations Office on Drugs and Crime (UNODC) has condemned Canada’s pot legalisation.

“UNODC regrets the Canadian legislature’s decision to legalize cannabis for the non-medical use,” the agency said in a statement. “As noted by the International Narcotics Control Board in its statement of 21 June, this decision contravenes the provisions of the drug control conventions, and undermines the international legal drug control framework and respect for the rules-based international order,” it said.

“I believe this would combat smuggling by gangs. All political parties should come on the same page to tackle gangs,” says Raminder Singh, a businessman based out of Toronto downtown.