The other day, one of Punjab’s most famous businessmen Pankaj Munjal came and talked enthusiastically about his vision of the “Cycle Valley” project he is setting up. I offered him good luck, and offered my opinion on why the bicycle had remained a poor cousin to a car. 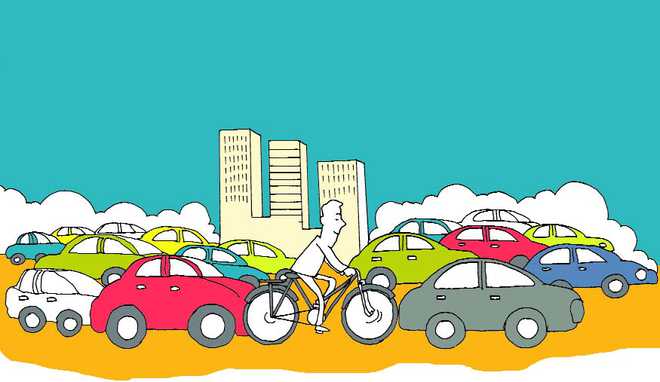 THE other day, one of Punjab’s most famous businessmen Pankaj Munjal came and talked enthusiastically about his vision of the “Cycle Valley” project he is setting up. I offered him good luck, and offered my opinion on why the bicycle had remained a poor cousin to a car.

Why is it that in a city like Chandigarh, blessed as it is with very many bike-lanes, we do not see very many people using the bicycle? It is mostly the poor people, often the working women, who can be seen riding a bike. It is a matter of our culture of social hierarchy, now reinforced by the rites of consumerism.

The automobile industry and its advertisers have brilliantly crafted a cultural value on possessing an automobile. A car is seen as the ultimate and most natural aspiration. Almost every desirable personal and social and cultural trait is depicted as getting fulfilled only if one was to acquire a car – the bigger the vehicle, the greater the gratification. In a relatively poor country, status has come to be associated too much with owning and driving a car; and, being driven in it is even better. If you own a car, you have moved out of the poverty bracket to a new superior world of middle class.

And, a car is also a symbol of authority. For decades, the good old white Ambassador car was seen as the ultimate symbol of government authority.

Once in a while, the judges, bureaucrats and politicians allow themselves to be photographed as riding a bike, but there is nothing to beat the car with a flag. If you do not have a car, you stand condemned as defrocked of your office – and, worse, your dignity. Hopefully, as India moves to the next level of economic prosperity, the middle classes would feel sufficiently self-assured to realise the recreational and health benefits of bicycling. During my student days at Yale, it was common for the teachers to bike down to New Haven from the neighbouring suburbs. No one thought any less of a professor because he had biked to the class.

Recently, when I was in England, it was eyeful to see entire families on biking outings — mothers, fathers and young children — navigating the seashore. Of course, the bike lanes are well-maintained and safe from encroachment by menacing motorists. And, here is the catch-22 dilemma: no city will provide biking lanes, and unless there are biking lanes, there would be no incentive to buy a bike and there would no demand for biking lanes. Yet, to begin with, the bike industry would need to produce higher, lighter, safer, faster varieties of bicycles to help the successful and the affluent move beyond the status symbolism of a car.

THIS is about Hillary Clinton. But first I must talk about a gentleman and a journalist named Edward Luce. He is currently The Financial Times’ Washington Political Correspondent and is respected as one of the most perceptive observers of the American political scene. Before he moved to Washington, he was posted in New Delhi as The Financial Times’ South Asia bureau chief. He did the very sensible thing: he got married to an Indian woman. He also wrote a book, In Spite of the Gods: The Strange Rise of Modern India. I remember reviewing the book for The Hindu. I was not much impressed with the book and the review said that much.

The point of Edward Luce’s review is that Hillary Clinton is a very substantive person, despite all the unease about her, both among friends and foes. “It is hard to think of another name — Donald Trump included — whose mere mention can more quickly turn a placid dinner party into a shouting match.” Yet Luce insists that her commitment and her capacity to plunge into issues are not sufficiently appreciated.

What impressed me the most in Luce’s review was a recall of a conversation with Hillary in 2007. That was the time when Senator Clinton was pushing for children’s health insurance:

“In 2007, I had to switch a one-to-one interview with Clinton into a telephone interview because I had to catch an urgent flight to New Delhi to do paperwork for my daughter’s adoption. Clinton asked where she was. I mentioned the name of the orphanage. ‘You mean the one behind Civil Lines in Old Delhi?’ she asked. ‘Yes, I’ve visited it.’ She then spoke knowledgeably on the subject for several minutes.”

I found Hillary’s instance recollection of a visit made many, many years ago hugely impressive and reflective of an appropriately thoughtful personality.

I have been meaning to write about Rana Ayyub’s slim book, Gujarat Files — Anatomy of a Cover Up. It is about the 2002 riots in Gujarat, a bloody and black chapter in our nation’s history. Rana Ayyub, then a journalist with Tehelka magazine, sought to discover the “truth” about those riots, the role of men and women who were constitutionally enjoined to ensure the safety and security of all citizens. Rana Ayyub’s whole enterprise was what is called ‘sting’ journalism. I am not particularly convinced of the ethics of this cloak-and-dagger kind of journalism, but her investigative peregrinations need to be applauded.

Millions of words have been written about the 2002 massacre of the Muslims in Gujarat. Thousands of arguments have been advanced for or against about the extent of Narendra Modi’s culpability in those riots. What is beyond argument is that Modi has tasted electoral prosperity after those communal riots. And since the “Gujarat Model” has been sold and bought as an acceptable and desirable way to industrialisation, the corporate India has used its control of the opinion — manufacturing sites to ensure that this 2002 business is not poked around too much.

But what happened fourteen years ago continues to take its toll on institutions and individuals. A certain kind of venality has eaten into Gujarat’s social soul. For all its presumed ‘success’, Gujarat is perhaps India’s most culturally and spiritually barren state. And the edifice now appears to be coming apart at the seams.

Gujarat Files seeks to tell the story of a ‘cover-up.’ It is a case of misplaced zeal. The truth is that every Hindu in Gujarat has been enlisted in the struggle over the history of those horrible days. The 2002 riots are unique because the RSS-VHP-BJP machinery saw to it that every Hindu felt that Modi was fighting his battle. There is no collective sense of shame or guilt or remorse.

That is why a book like Gujarat Files has not made any ‘waves’ in Gujarat or beyond. It appears though some effort has been made to ensure that the book is not easily available in bookstores. But it is a book that every Indian may want to read only to understand how darkness can creep in upon a society.

THANKS to gentle instigation from a colleague, I went to call on Dr NN Wig at Lajpat Rai Bhawan in Chandigarh. I was told that here was a man who was providing the poor a much-needed service — offering counseling to poor psychiatric patients. And he has been at it for three decades, without making any hoo-ha about his work, without seeking any ‘recognition’ from conventional dispensers of ‘honours.’

I found Dr Wig to be extraordinarily humble and unpretentious, exuding an aura of service and nobility. He is a definite anomaly in this age when mercenary calculations have overwhelmed the medical profession. But there is a certain satisfaction, a kind of special kick, in helping the poor and the helpless. Only very few are privileged to experience that kick.

Once there was a stigma in India about social psychiatry. Those who sought a psychiatrist’s advice were mocked as ‘mad.’ Thanks to the efforts and perseverance of a handful of social psychiatrists like Dr Wig, we have a different perspective. Still, in popular parlance, a ‘shrink’ is deemed to offer services mostly to the upper middle class or the rich. Dr Wig stands apart because he recognises that the poor too have similar problems and they too have a right to a social psychiatrist’s services. And, he offers his free and freely.

And what was most pleasing for me was to discover that Dr Wig had known a family friend, Professor Morris Carstairs, a distinguished social anthropologist, who had done pioneering research work in the social psychology of witchcraft in India. His book, Death of a Witch: A Village in North India, is a classic. Carstairs was a friend of my mother-in-law and would visit us whenever he came to India.

And, now in Chandigarh, there is Dr Wig talking about Morris Carstairs. What a pleasant coincidence. Small world, indeed!

And that calls for coffee. Anyone?