A new war memorial and near-enough war-like situation is perhaps the right time for the country with a rich military heritage to visit monuments that remember our war dead. 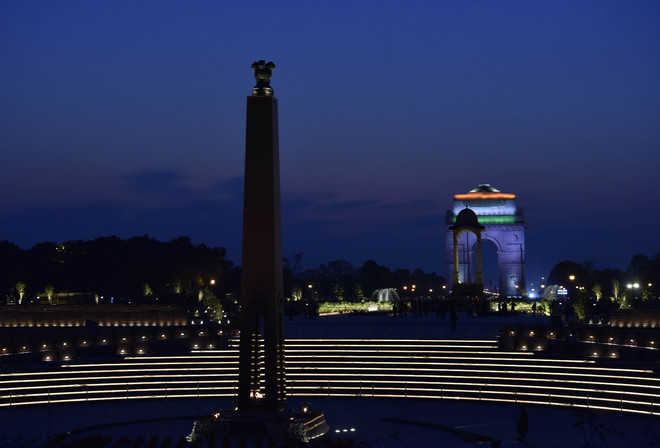 A new war memorial and near-enough war-like situation is perhaps the right time for the country with a rich military heritage to visit  monuments that remember our war dead. With a chequered history having its boot prints from the shores of the Atlantic in the west to the backwaters of the Pacific in the east, hundreds of war memorials have been dedicated to the Indian soldier both at home and overseas where they have fought. Many are located within military stations, some in public places and a few small ones in villages or educational institutions to keep alive the memory of bravehearts who died defending our borders.

The practice of erecting war memorials goes back hundreds of years, both in India and other parts of the world when ancient rulers and kings constructed victory memorials to flaunt their exploits on the battlefield. Among the oldest in India is a carved stone, almost 800 year old, at the Kaitabhesvara temple in Karnataka. With its carvings of soldiers and a Kannada inscription dated 1235 AD, the stone eulogises the prowess of kings and warriors.

The India Gate has been the nation’s iconic and most visible war memorial located on the Rajpath in the heart of the Capital. Initially constructed for Indian soldiers killed in World War I, it has served as a national memorial since 1972 after a simple edifice, surmounted with a reversed rifle capped by a helmet, was constructed under the India Gate’s arch. In a brass cauldron on each corner on the platform from which the black edifice bearing the inscription “Amar Jawan” arises, burns the eternal flame.

While the Prime Minister, accompanied by the three service chiefs, has traditionally laid a wreath here on Republic Day each year, a recent convention of the President doing the same on Independence Day has been introduced. The three Service Chiefs and top military brass pay homage at the memorial on assuming charge of their office and on the anniversary or Raising Day of their respective service, arm or branch.

The Chandigarh War Memorial is among the largest war memorials in the country with the names of about 10,500 personnel from the three services who died in the line of duty since 1947 inscribed on its walls. It has a unique architectural concept and design, with the central edifice consisting of three converging posts, signifying the Army, the Navy and the Air Force, emerging from a terraced circular base. It lies within a sunken circular arena about six feet below the ground level. The memorial was conceived by the late Lt Gen JFR Jacob, who had commanded a division in the 1965 Indo-Pak War and later negotiated Pakistan’s surrender in 1971, when he was the Governor of Punjab in 2004.

Built in the memory of soldiers who died in the 1962 Indo-China War, the Twang War Memorial is located near the main town of Twang in Arunachal Pradesh. The 40-feet stupa-like structure, constructed in accordance with the local religious practices, is called Namgyal Chortan by the locals. The surrounding granite walls are inscribed with the names of 2,420 martyrs. Artifacts, maps, photographs, news clippings and remains of the war are displayed. A marble plaque reads, “In the memory of those brave soldiers who made supreme sacrifice defending the frontiers of Mother Land during the 1962 Sino-Indian war.”

Inaugurated by India’s most revered soldier, Field Marshal Sam Manekshaw in 1999, the Indian Military Academy War Memorial at Dehradun pays homage to academy alumni who have fallen in the line of duty. The structure replicates the Chetwode Tower, the edifice atop the academy’s main building. The circular memorial with its pillars and columns is built from Dholpur Stone and at the centre of the sanctum sanatorium is a bronze statue of a gentlemen cadet with a sword presenting arms.

The 5,000-year-old history dating from Mahabharata era to the present times is on display at the Army Heritage Museum at Shimla, which is said to be the only museum of its kind in the country. Established in 2006 by the Army Training Command, it houses rare artefacts like the captured flag of 1st Bahawalpur Infantry Battalion of Pakistan, bust of Khudadad Khan, the first Indian to be decorated with the Victoria Cross, execution order of Mangal Pandey and original dress of the first commissioned women officer of the India Army, Major Priya Jhingan. Military philosophy, chronology of events, evolution of Indian military uniforms, arms from the Vedic period, weapons used in the world wars, formation signs, flags, honours and awards adorn its interiors. A section is dedicated to the 21 Param Vir Chakra recipients, rolls of honour and battles of Longewala and Tololing. UN peacekeeping missions, disaster relief operations, military music, music, sports and adventure activities are also featured.

Built in 1996 to commemorate the victory of the Eastern Naval Command in 1971, the Victory at Sea War Memorial in Visakhapatnam carries the epitaph, “The nation that forgets her defenders needs no ancestors” on the central tower’s base. Located near near the Submarine Museum, it represents all three services, with a T-55 tank, a Gnat fighter plane and the Navy’s P-21 missiles that were used to wreak havoc on Karachi harbour on December 4, 1971 being displayed. It was off Visakhapatnam that Pakistani submarine PNS Ghazi sank.

In the world’s second coldest inhabited place, Dras, stands the memorial commemorating the sacrifices of bravehearts who were martyred in the Kargil conflict in 1999. Every year on July 26, known as Kargil Vijay Diwas, a ceremony is held to pay tributes to the martyrs. Several modifications and additions have been made over the years, the latest being a giant national flag, weighing 15 kg hoisted atop a 100-foot staff in 2012.

The story of Siachen remains unparalleled in the history of warfare. Nowhere else have soldiers fought and held ground for so long and at such desolate heights, where more men have fallen to the vagaries of nature than to enemy bullets. The Siachen War Memorial is situated in the rugged, barren landscape of the base camp on the banks of the Nubra that flows from the glacier that is also the world’s highest battlefield. The names of all soldiers who have died in Operation Meghdoot since its launch in 1984 are etched at the memorial.

At a time when war clouds are hovering over the sub-continent that has witnessed countless wars and conflicts, a vast new monument has been unveiled in the Capital to honour men and women in uniform. First proposed by the Armed Forces in 1960, the National War Memorial was finally dedicated to the nation on February 25 this year. “The intent of the design is to look at the memorial as a place were soldiers are reborn. The design concept is interpreted as four concentric circles of varied elements as layers with its own functionality and expressing different emotions of protection, bravery and sacrifice through spaces,” says Yogesh Chandrahasan, the project architect.

An open competition for the design was floated by the government in August 2016. Out of 428 entries received, Chennai-based WeBe Design lab won the first and third place. In 2017 first winning entry was commissioned for building the memorial.

The outermost circle, Rakshak Chakra (circle of protection), personifies the territorial control of the borders by the armed forces, with trees being the major elements and arranged in a specific order of circular arrangement, inspired from the formations of soldiers, signifying their firm presence and hold on the ground.

Next is the Tyag Chakra (circle of sacrifice), metaphorically representing the deployment of soldiers in concentric circles on the battlefield, as depicted in the epic Mahabharat. Each granite block represents a martyr, on which his name and rank are engraved. The wall holds name of 25,942 martyrs, who have sacrificed their life since Independence.

The Veerta Chakra (circle of bravery) has been conceived as a subterranean colonnaded semi-open corridor holding stories of valour. The gallery holds six bronze murals which depict the six important battles fought by Indian soldiers post-Independence.

The focal point of the memorial is the innermost circle, Amar Chakra, symbolising the immortality of soldiers who attained martyrdom. The obelisk in the center holds the eternal flame at the bottom with the four-headed Ashoka Lion emblem perched at the top.

The Param Yodha Sthal is unique space dedicated for recipients of the Param Vir Chakra, India’s highest award for gallantry. The park is designed around existing trees; accommodating, bronze statues of 21 recipients.by

“We were a team of eight architects, led by Yogesh Chandrahasan that conceptualised and designed the memorial,” adds Udhaya Rajan N, a partner in the firm. Spread over 42 acres adjoining India Gate, the design of the memorial is subterranean with the built form not exceeding 1.5 metres above ground level.  The design was conceived carefully to retain the character of the existing public open space and the aesthetical sanctity of Lutyen’s planning.

The Rezang La battle, fought against the Chinese in November 1962 at the height of 18,000 feet in Ladakh was one of the most decisive battles fought against China and is officially recognised as a "rare battle in military history" with the fighting being hard and bitter and troops going beyond the call of duty. A memorial to this battle stands at Rewari, Haryana. With a Sudarshan Chakra adorning the memorial’s edifice, the names of all martyrs have been engraved on it along with comments of some senior officers regarding the gallantry of the soldiers who fought the battle.

AAP MLAs stage dharna outside Assembly ahead of Punjab budget