THE Composite Water Management Index (CWMI) released by Niti Aayog this month could not have been timed better. 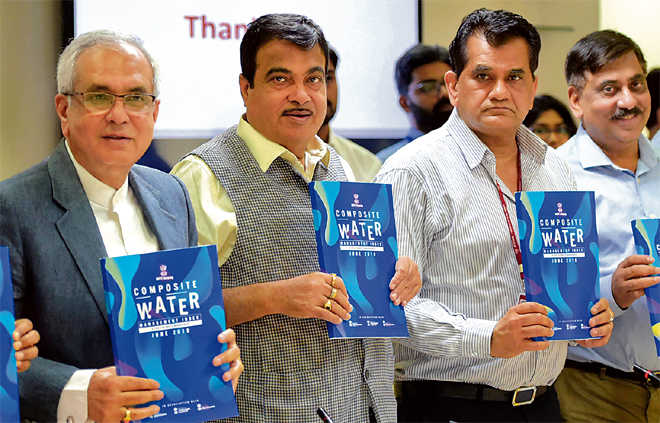 A sufficiently detailed understanding of groundwater data is needed, backed by sound policy and institutional considerations.

THE Composite Water Management Index (CWMI) released by Niti Aayog this month could not have been timed better. In the backdrop of unprecedented water crises in Shimla, it only alleviates fear of imminent water crises. The CWMI projects that water-stressed population is likely to double by 2030 from the current 600 million, when 40 per cent population will have no access to drinking water, eventually contributing to a cumulative loss of 6 per cent to the country’s GDP by 2050.

That the crisis will only worsen is discomforting for unsuspecting consumers. The report projects the water demand to be 1,498 billion cubic metre (BCM) in 2030 against an expected supply of only 744 BCM — a little less than 50 per cent. In presenting a scary future, the CWMI inadvertently indicts both the Central and state governments for their failure to meet the growing inter-sectoral water demand.

The indictment is justified, given the fact that the total water endowment of 4,000 BCM in the country far exceeds the maximum utilisable potential of 1,137 BCM. While agreeing that there is a hydrological limit to tapping natural endowment, as rainfall has other essential ecosystem functions to perform, how is it that the projected supply of 744 BCM in 2030 remains short of the maximum utilisable potential of 1,137 BCM? Clearly, this is a serious gap in the narrative that can turn the story differently.

The CWMI, however, has acknowledged that ‘data drought’ plagues the sector as data on water exists in silos; is seriously limited by coverage, robustness and reliability; and that there is very little inter-state or Centre-state data-sharing.  One can only marvel at the wisdom of the Niti Aayog to still create a framework for tracking state-wise progress on programme implementation and achievement in water supply and distribution for encouraging competitive and cooperative federalism without tackling ‘data drought’ head on!

The CWMI is designed to measure state-wise progress on water supply and distribution against nine programmatic indicators, seven of which are supply driven. That 75 per cent of the households do not have drinking water; 84 per cent do not have piped water access; and 70 per cent of our water is contaminated are a clear manifestation of distribution and management failure. It must, however, be clear that infrastructure failure to distribute water while avoiding losses to the systems has been erroneously equated with water stress, sending the alarm bells ringing.

If insiders’ account is any indication, the CWMI has been published in haste without engaging the general public and encouraging scientific scrutiny, and therefore reflects inadequate understanding of varying levels of causality and complexity in the water sector. The populist nature of the index can be gauged from the fact that it has used newspaper reports to draw important conclusions. That Bengaluru may be heading towards ‘Day Zero’ (when it runs out of water, like in Cape Town) is based on newspaper reports, and not hard data.

There is overall lack of rigour in sourcing and validating data. Since groundwater extraction to meet diverse demands is in excess of 60 per cent in the country, it offers a perfect case in testing the veracity of the findings. The CWMI had access to observation data from 55,000 wells, while there are 12 million wells in the country. Using data from 4.5 per cent wells to pronounce judgment on groundwater is bound to be skewed, and can only promote sub-optimal user behaviour, and limit research and innovation.

Contrast this with the monthly monitoring of groundwater at 150 locations in Bengaluru city since December 2015, under the Bangalore Urban Metabolism Project, an initiative of the Indian Institute of Science and the Stockholm Environment Institute. There are wide variations in groundwater level within 750 sq km of the city limits, indicating the impact of geologic variability, differing well depths, and effects of pumping. Only in some pockets in the outskirts where piped supply has been inadequate, the groundwater level has dipped below 45 metres.

In dissonance to media reports that paint a dismal picture of the city’s groundwater levels, the good news is that in large parts groundwater is well within a depth of 15-30 metres (despite drought in 2016) in the table-top city resting on hard-rock aquifers. However, what this study brings to light is the need for a correct and sufficiently detailed understanding of the local groundwater data backed by sound policy and institutional considerations for effective governance.

Coming out of the Niti Aayog, which stands for ‘transforming India’, the CWMI has missed out on being transformative. While the index needs to expand the scope of its inquiry, the urgency of developing a comprehensive blue book on water data pooled from diverse sources can help gain objective insights for developing decision-making tools for effective water governance.