I have been aching with democratic confusion, indecision and unseasonal bouts of conscientious immorality over the raging "office of AAProfit" controversy. 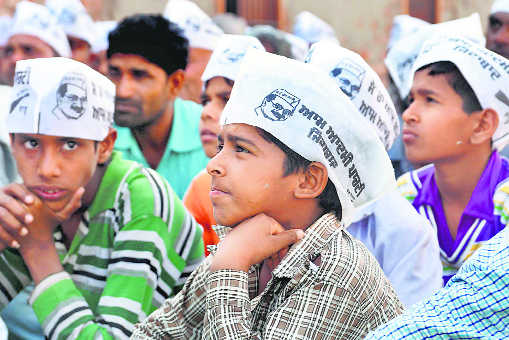 I have been aching with democratic confusion, indecision and unseasonal bouts of conscientious immorality over the raging "office of AAProfit" controversy. Yes, one might say, democracy is nothing but dignified confusion with constitutional sanction. But that only adds to my princely and luxurious indecision: "to be or not to be" in favour of "profits of office".

Four decades of being a splendid failure in politics have taught me that when it comes to being honest in public life, it is always better "not to be", especially when I know that "to be" means having to be five different persons at the same time: conscientious, correct, clean, committed and competent. Put together, this is five persons too many for one person to want to be.

But the magic of my country lies in that you can always choose "Not To Be" and yet find your name on the voters' list. And to those — like some across the border — who snigger at democracy calling it "glamourised chaos", one must always point out that the meaningful confusion of democracy is far more profitable than the tyranny of militarised clarity — even when this confusion means only a conflict between profit and office.

That reminds me why I started this piece at all.

If you look at our media, you will find that the debate over the presidential intervention in the "office of profit" issue is merely the latest excuse for strengthening democracy. Now "the nation wants to know" why the Prez acted the way he did and could he not have deferred the matter by rolling it to the Supreme Court for advice on another advice he had received from the EC.

But why, you might ask, should the President have deferred the matter at all, instead of doing the "obvious" — accepting the first advice? To know the answer, you would need to understand the political rather than the constitutional processes. But first, what is an "office of profit"? Simply put, it means that you have the office and your opponent has the profit. In the present case, the AAP has the office and the BJP has the (political) profit.

But what about the role and decorum of the office of the President? You must not read too much into that, especially if you know the pride Shri Ram Nath Kovind takes in the political imprint on his DNA. Obsessive fetish for decorum might demand that the Prez should erase that imprint. But you don't need to be a political biologist to know that it is easier to erase a person than his DNA imprint.

Keeping that in mind, I expected the Prez to withhold his assent to the EC advice in order to deny the halo of martyrdom to the 'Mother of all Martyrs' — Arvind Kejriwal. With the Lok Sabha elections round the corner, why would anyone want to take the byelection gambol on the 20 Delhi seats which would be vacated and would have to be filled much before the scheduled Lok Sabha poll? If my surname was Shah or Modi, then I would not want to force these byelections on the nation and distract its attention from the "unprecedented and hectic pace of development which the country is making under the dynamic leadership of Prime Minister Narendra Modi." I dare not even presume myself "to be" either one in these two. But if I had been merely the resident of India and nothing more, then I would have referred the matter to my conscience and refused to hear its call as long as I thought the country could not afford a confrontation between Delhi and New Delhi.

I would have known that the same party must rule the two places. I would have made it clear that to me as President, 'the same party' would not necessarily mean the BJP. Who stops the SAD (Mann) or SAD (1920), the Asam Gana Parishad, the Hurriyat, the Panther Party or the AIADMK etc from winning both Delhi and New Delhi. (I don't even know why they call a centuries-old city as 'New' Delhi).

I still see no reason why Mr President had to be so recklessly quick in a country where spiritual dynamism should always be preferred to biological activity. Introspect, meditate — do anything, but don't act! Nor do I understand why the Prez must be "impartial". If it is only to meet the irritating constitutional requirement of impartiality, then the Prez can always act "as if" — rather than as — impartial. After all, he does act "as if" he were the Supreme Commander of the Armed Forces. The "as if" clause is meant just for situations wherein the Constitution comes in the way of the country's larger profits — err interests.

Also, to be fair to Kejriwal, I as President would have given him a hearing, especially when I would have known that the AAP does not believe in making profit worth only a few lakhs through the office of a parliamentary secretary when it can easily rake in over Rs 100 crore through just three seats in the Rajya Sabha. Whatever else you may hold against AK, you cannot accuse him of not knowing the difference between the meagre proceeds from an "office of profit" and the vast "profits of an office".

(With tongue firmly in cheek)