A new phase in US pivot to Asia?

ON December 31, 2018, US President Donald Trump signed into law the Asia Reassurance Initiative Act (ARIA), initiated by the Congress. 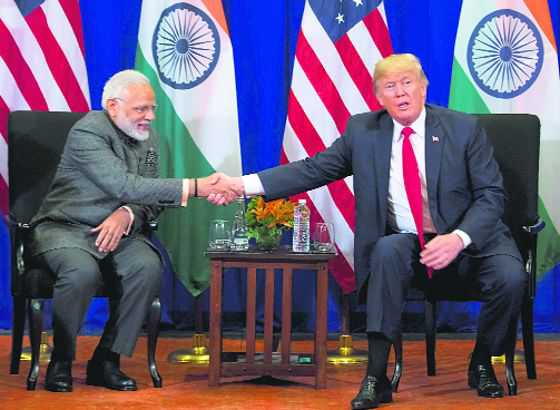 ON December 31, 2018, US President Donald Trump signed into law the Asia Reassurance Initiative Act (ARIA), initiated by the Congress. It spells out a long-term strategy for the Indo-Pacific. It conveys willingness of the Congress to support financial appropriations for initiatives the US Administration may bring before it in realising various components of the strategy.

The amount indicated is modest, a mere $1.5 billion per year for the next five years, hardly commensurate with the scale of ambition ARIA manifests. When compared to the vast sums that China is deploying for its Belt and Road Initiative (BRI) in Asia and beyond, the US effort would appear anaemic. But it represents a relatively greater level of commitment to the region than the earlier ‘Pivot to Asia’ declared by President Obama in 2013 that turned out to be mainly a rhetorical flourish. It coincided with China’s militarisation of offshore islands in South China Sea and the declaration of an Air Defence Identification Zone in the East China Sea which went unchallenged. Will ARIA make a difference? Will it reassure US military allies and partners in the region?

ARIA is important because it manifests a change in US perception of China from it being a competitor to now an adversary. The Act expresses ‘grave concerns with Chinese actions that seek (i) to further constrain space for civil society and religion within China; and (ii) to undermine a rules-based order in the Indo-Pacific region’. The fact that in a highly polarised political environment, the Act was passed by consensus in the Senate, and by a very large majority in the House of Representatives, is significant. It demonstrates a broad consensus in the US that China is a threat not only to its security interests, but also an economic and even ideological rival. This is also reflected in the explicit commitment to helping Taiwan maintain ‘asymmetric’ military capabilities vis-a-vis China. The Act could be a warning to Trump that in dealing with the China threat, his alienation of allies and partners is inimical to US interests. It may constrain his transactional approach to China, relieving pressure on that country if he is able to get a favourable trade deal, for example. Trump may still go his own way, the trade war may subside, but ARIA signals that the underlying trend is unmistakably towards sharper US-China confrontation.

ARIA embraces the concept of Indo-Pacific in place of the earlier focus on Asia-Pacific. The difference between the two concepts is the inclusion of India as an integral part of the geostrategic space that the US sees as the main theatre of contestation with China. The Act defines Indo-Pacific as stretching from the western shores of the Pacific to the western shores of India, or more colourfully as stretching from Hollywood to Bollywood. India occupies a prominent place in the text which recognises ‘the vital role of the strategic partnership between the US and India in promoting peace and prosperity in the Indo-Pacific region’ and welcomes India being designated as a ‘major defence partner’ enjoying cooperation at a level ‘commensurate with the closest allies and partners of the US’.

Despite India’s hesitancy, the Act regards the Quad as being ‘vital to address the pressing security challenges in the Indo-Pacific region. India has not linked its embrace of Indo-Pacific with the Quad and has been cautious in projecting its role and future evolution. However, the US sees the Quad as integral to its Indo-Pacific strategy and this may pose a challenge to India’s intent of not being seen as a participant in an overt containment of China.

In his speech at the Shangrila Dialogue in Singapore in June, PM Modi had defined Indo-Pacific as encompassing the entire oceanic space, from the western Pacific all across the Indian Ocean to the eastern shores of Africa. However, in a joint statement with the Indonesian President, reference is made to peace and security in the Indo-Pacific being realised through ASEAN-led institutions and processes, recognising ASEAN centrality. It would appear that India has tacitly accepted that in operational terms the more restricted definition applies. There is also the obvious contradiction between the Quad and ASEAN centrality as key mechanisms for a new security architecture in the Indo-Pacific. Reconciling the two will be a diplomatic challenge.

ARIA expresses strong recommitment to US military alliance partnerships in the region, but it also underscores the importance of expanding US economic and trade ties with countries in the region, in particular with ASEAN countries. The importance of engaging with ASEAN, the East Asia Summit process and Asia Pacific Economic Cooperation (APEC) is emphasised. How much of this will be followed through by a Trump administration allergic to trade pacts and multilateral arrangements remains to be seen.

Predictably, the legislation has a prominent focus on North Korea and the continuing threat from its pursuit of a nuclear arsenal and the goal of ‘complete, verifiable and irreversible dismantlement’ of its N-programme is reiterated, linking the lifting of any sanctions to concrete measures undertaken by the North Korean regime. The Congress has, through the Act, sought to keep itself abreast of the progress of negotiations, thereby seeking to prevent Trump from any impulsive giveaways. There is no mention of the Trump-Kim summit or the agreement reached between them and this reflects the concern over his unorthodox initiatives.

There is an entire section of the Act which seeks to ‘promote US values in the Indo-Pacific region’. There is a reiteration of US commitment to upholding rights and promoting democratic values. China is mentioned specifically, as is Myanmar and the Philippines. We should therefore expect greater activism on the ideological front from the US or at least in its Congress.

For India, US pressure on China is helpful, but a confrontation, which forces countries to take sides, may not be welcome. Some serious diplomatic tight-rope walking lies ahead.