When the 164-member World Trade Organisation held its 11th ministerial meeting in Buenos Aires, Argentina (MC11) in December 2017 and it ended in an impasse, another mini-ministerial WTO meeting was held in Delhi on March 20, in which 54 members participated. 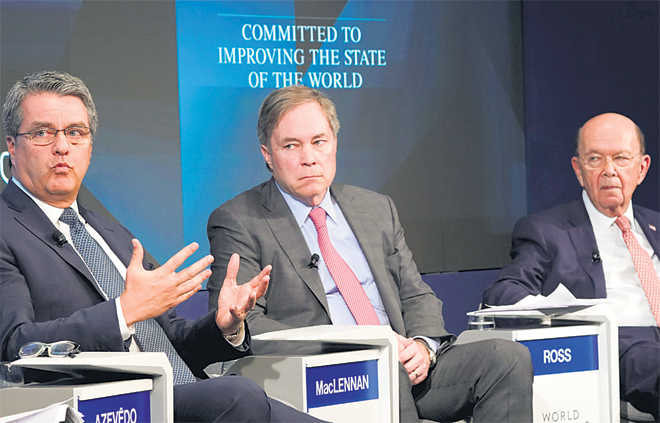 Not on same page: US unilateralism is harming the cause of developed countries.

When the 164-member World Trade Organisation held its 11th ministerial meeting in Buenos Aires, Argentina (MC11) in December 2017 and it ended in an impasse, another mini-ministerial WTO meeting was held in Delhi on March 20, in which 54 members participated. It also did not make any headway except a discussion on protectionism and denouncing unilateralism. The main reason for WTO’s inability to achieve anything substantial is the lack of consensus on some controversial issues among members and the US becoming more and more belligerent in its interventions, especially on questions raised by India, China and other developing countries.

It is becoming increasingly clear that the Geneva-based 22-year-old organisation, which is supposed to undertake trade monitoring and contribute to the effective functioning of the multilateral trading system, is toothless and succumbing to the pressure of the developed countries, especially the US. It, however, still remains the primary instrument governing a rules-based multilateral world trading system. The US has recently challenged India’s subsidies because it has reached a per capita income of $1,000.

Indeed, the WTO is losing its essential focus on trade negotiations and is becoming a litigation-centred organisation because the trading arrangements between member-countries is increasingly bypassing the WTO and formulating their own agreements.

In the past, there was a sympathetic treatment towards developing countries, like India, which got special and differential treatment at the WTO that gave them more time and leeway to comply with the WTO rules. But now the US has begun to question this special treatment. As Commerce Minister Suresh Prabhu recently pointed out, India has to be treated differently because it has to take care of 600 million people who can be considered as poor.

In the Buenos Aires meeting, India sought a permanent solution to its public stockholding issue because currently it is under the peace clause put in place at the Bali ministerial meeting of 2013, by which India continues to undertake stockholding of foodgrains equal to 10 per cent of the value of its total production for meeting its food security requirement. But a permanent solution, which was promised, has not been delivered at the Buenos Aires conference mainly because the US blocked it.

Public stockholding is very important for India’s food security and if the issue is not settled, it may have to roll back its Food Security Act, meaning compromising on food provision for the poor. There has however been no loss of status quo on stockholding and India can continue with its support price programme. But there has to be a permanent solution on how the MSP is to be fixed because, according to the WTO’s agreement on agriculture, the MSP had to be calculated on the basis of price of foodgrains in 1986-88, and the total subsidy would have to be below 10 per cent of the total value of production. India strongly disputed this formula because the current prices are much higher and hence the total MSP given as subsidy would also be higher. India’s food subsidy is still less than 10 per cent of the total value of production.

In agriculture, India and China have opposed the huge production-related price distorting subsidies given by developed countries like the US and the EU to their farmers, which make their products cheaper compared to produce from developing countries; thereby, making it harder for them to compete with advanced countries. The US alone gives around $150 billion in direct subsidies to farmers which come under the “green box”, according to the rules of GATT, the predecessor of the WTO, and hence are allowed. India’s MSP is considered trade distorting and comes under the “amber box”, and India is mandated to reduce it. But this issue of high subsidies given by developed countries to their agriculture has not been addressed recently. In general, the US refuses to have any dialogue on agricultural reforms.

The Doha Development Agenda, which the Indian Government has been keen to promote, and which is based on multilateralism, has been put on hold, much to the chagrin of many developing countries comprising the Group of 33.

So, what is it that the WTO has achieved? It has become only a dispute settlement body and even that role has been blocked by the US, as it has refused to participate in the nomination of judges to the appellate body, creating a paralysis in the WTO’s dispute settlement system. Members are usually appointed by consensus and the US is an important member whose vote matters.

Throughout its existence the WTO has been dominated by the developed countries, with the US playing an important role. From supporting trade and investment liberalisation in the world, and insisting on stiff tariff reductions for prying open developing country markets, the US has itself turned protectionist. It blocked the Trans Pacific Partnership Agreement and wants to renegotiate the North Atlantic Free Trade Agreement with Canada and Mexico in a bid to realise President Trump’s goal of “America First”. He has slapped 20 per cent customs duties on steel and 19 per cent on aluminium, which will affect China and the EU.

India, too, will be affected because China will try to dump excess steel in India while facing protectionism in the US. India has to compete with the members of ASEAN in manufactures for increasing its share of global trade. It already has FTAs with a number of Asian countries and is a member of several other regional groupings, including RCEP. India needs special and differential treatment in the rules of public stockholding for its food security, and also has to cater to the needs of exporters through incentives to raise competitiveness. It needs to undertake reforms in agriculture and address the needs of poor farmers and small and micro enterprises. It is interested in “Make in India” policy which gives priority to its own industries.

Today, US unilateralism is not serving any purpose and it clearly wants a new type of WTO. India, on the other hand, has long been a votary of multilateralism, but with the current impasse at the WTO — especially regarding its policy on food security — it is in a quandary about what to do.