There are limitations to muscular politics. 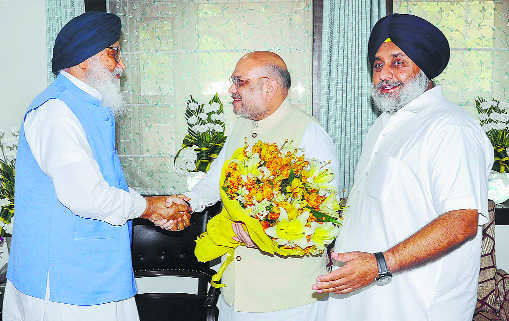 There are limitations to muscular politics. The BJP is beginning to realise this after a string of bypoll losses this year exposed its vulnerability to the challenge from regional parties. It played hardball with allies and state satraps for four years and ended up losing friends and uniting the Opposition. Now that the law of diminishing returns has kicked in, that too on the eve of the General Election, it has been forced to embark on anoutreach to such old partners as the Shiv Sena, SAD and JD(U) in the hope of salvaging the remnants of its tattered NDA.

As Amit Shah goes about his mission with uncharacteristic humility on behalf of his boss Narendra Modi, even these old friends privately wonder whether the duo is up to the task. Neither is imbued with the congeniality or consensual nature of Atal Bihari Vajpayee who is regularly extolled by the BJP's allies as a shining example of a coalition leader. And both are driven by a burning ambition to revive the 1950s era of the single-party rule when the Congress dwarfed all others. If realised, that would sound the deathknell for the smaller parties that have tasted power as national players in the past three decades.

There's little doubt that the BJP finds itself caught between a rock and a hard place. It can pursue its larger goal of filling the space the Congress used to occupy in its golden period only by wiping out regional parties, including allies. But as recent bypoll results reaffirmed, today's political landscape is too fragmented for one party to dominate. The BJP's stunning sweep to majority rule in 2014 gave a misleading impression that regional parties are dying out and that the era of coalitions is over. Bypoll results this year have affirmed that these parties are very much alive and kicking and when they combine, they are a force to reckon with. The 2019 election could well throw up a coalition government again.

The Modi-Shah outreach to old NDA allies will not be easy, not for want of trying but because it's next to impossible to balance competing national and regional interests without paying a heavy price like the Congress has done. The Congress under Rahul Gandhi has diminished itself from lead player to a mere co-star to accommodate the demands of state satraps who want to wield the levers of power in a united opposition front against Modi.

The success of the combined opposition in BJP bastions in the recent bypolls has given momentum to the unity move. But it is clear that the Congress is bearing the cost. In Karnataka, it gave up the Chief Minister's position as well as the finance portfolio to Deve Gowda's JD(S) despite winning twice the number of seats. This was the only way to stop the formation of a BJP government and Rahul was willing to sacrifice his party's local aspirations at the altar of his larger goal for 2019.

Again, in UP's Kairana, he compelled party-hopeful Imran Masood to withdraw from the bypoll contest in favour of RLD nominee Tabassum Hasan who was being backed by the SP and BSP. Hasan won.

After the BJP's stunning performance in 2014, the Modi-Shah duo made no secret of their desire to paint the country saffron, from Kashmir to Kanyakumari. Shah has declared so on multiple occasions. And their formidable election machine has delivered governments in 21 out of India's 29 states to the party, alone or in alliance, in the past four years. Can the duo now wind down this machine, put their ambitions on the backburner and tell the party workers to make way for allies, old or new?

Or can they do to the BJP what Rahul is doing to the Congress? Rahul may just get away with it because his party is on the verge of political extinction and joining forces with regional parties could be the only route to salvation. But the BJP has been on the up and up for four years. It may have hit a slump now, but Modi and Shah can hardly afford to tell party workers to stay at home in key states where it may need allies to shore up its defences for 2019.

Shah put his best foot forward when he went to Mumbai to meet Shiv Sena's Uddhav Thackeray. He was sweetness and light as he spent two hours at 'Matoshree' and exchanged pleasantries with Uddhav's family for the first time. The optics were good, but the BJP may have to offer the Sena more than a few additional Cabinet berths to pacify its oldest ally. Relations have turned frosty because of a tussle for power. The old equation was clear: the BJP would rule at the Centre and the Sena in Mumbai. This changed after 2014 when the BJP scored a higher strike rate in Maharashtra than its ally.

As the BJP's ambitions soared, it decided to fight the state elections later that year on its own. Though it did not win a majority, the BJP established itself as a party to watch. The Sena's decline in Maharashtra has made Uddhav insecure while galvanising the BJP's aspirations. The two recent Lok Sabha bypolls came as a rude jolt to the BJP. The Congress-NCP combine snatched Gondiya and though the BJP won Palghar, it did so by a greatly reduced margin compared to 2014. Worse, the Sena contested the seat for the first time on its own and emerged as a close second, setting off alarm bells in the BJP and sending Shah scampering to Mumbai to plead with Uddhav not to leave the NDA as he has threatened.

Bihar too is proving to be knotty for the BJP. Nitish Kumar is making a bid for space in the NDA but this can only happen at the BJP's cost. Watch out for Ram Vilas Paswan, ever the weather vane, who is displaying signs of restlessness.

The alliance in which the tussle for power is the least is the one with the Akali Dal. But the BJP has pushed this ally dangerously close to the edge with repeated affronts and deliberate slights. Unlike the Sena and Paswan, the Akalis are unlikely to leave the NDA, but it will take more than a courtesy call by Shah to Chandigarh to restore the bonhomie that marked an alliance crucial for Hindu-Sikh unity.

Hot summer ahead, may slow down infection