The Narendra Modi government appears to have taken two steps forward and one step back with regard to the signing of the ''foundational agreements'', which the United States has been pressing for since 2004. 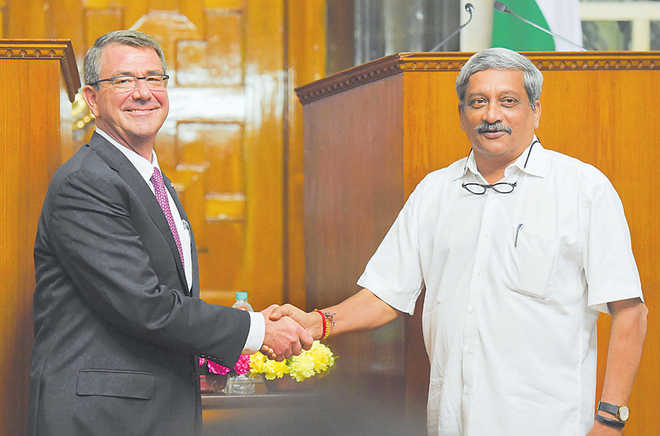 The Narendra Modi government appears to have taken two steps forward and one step back with regard to the signing of the 'foundational agreements', which the United States has been pressing for since 2004. One of the three - Logistics Exchange Memorandum Agreement (LEMA) - has been "agreed in principle" during the visit by US Defence Secretary Aston Carter, but for some incomprehensible reason deferred by a "few weeks" or a "few months" for the actual signatures.

Typically, the Modi government has not cared to consider public opinion - although this would be a landmark event, since the pact will give the US forces access to Indian military bases, which signifies a great leap forward in independent India's foreign and security policy doctrines.

What necessitates this breath-taking leap of faith at the present juncture remains unclear. The previous UPA government had profound reservations about signing the foundational agreements, as they'd erode India's strategic autonomy and adversely affect its independent foreign policies. The LEMA remains an unequal pact insofar as India is not a global power, it does not have an interventionist agenda abroad and has no need to access US military bases for logistics, and, of course, none of the friendly countries with which India holds military exercises ever demanded such pacts as an underpinning of cooperation.

The perception will arise in the region and beyond that India has shed its traditional aversion to military alliances and non-aligned policies and proposes to bandwagon with the US. Such a perception does not do India good. Specifically, the perception that India is drifting into an alliance with the US will generate apprehensions in the Russian mind about defence cooperation with India. Russia has been and continues to be the principal source of cutting-edge military technology for the Indian armed forces. Despite the high-sounding rhetoric of the US-Indian Defence Technology and Trade Initiative and 'Make in India', the ground reality is that so far what has happened under these rubrics is, plainly put, zilch. Mr. Carter's visit did not result in a single major project actually taking off.

On the other hand, the US has openly sought to get India on board its so-called 'rebalance' in Asia. With a view to countering China's rise, the US proposes to create an alliance system in Asia - an 'Asian NATO' - in which it envisages a pivotal role for India, alongside Japan and Australia. The US game plan is to co-opt India into an alliance system based on the 'interoperability' of the armed forces which of course will demand the use of similar weapon systems. Within the NATO system, what the US ensures is that the 'interoperability' requires extensive use of US-made weapons, which in turn cements Washington's trans-Atlantic leadership role in decision-making on all political and military issues.

In the Indian context, a prime US motive will be to erode the Indo-Russian strategic partnership. The 'isolation' of Russia is a major global objective of the US. On the contrary, any atrophying of strategic ties with Russia is fraught with serious consequences for India's long-term interests as an emerging power in a multipolar world order. India has shared interests with Russia within the ambit of BRICS and the Shanghai Cooperation Organisation.

Equally, any close identification with the US' rebalance strategy in Asia can create serious complications and distrust between India and China. The point is, India is not seeking confrontation with China. Its focus is on normalising the relations with China through a steady process at the bilateral level. Indeed, the UPA government achieved remarkable success in this direction. An intensive dialogue at the top levels of leadership became a regular feature of our diplomacy and the two countries were able to reach a point where they agreed that they had much more in common by way of shared interests than the differences that might keep them apart. Unfortunately, the Modi government has not kept up the UPA's momentum of high-level dialogue.

Added to this, if India gravitates toward the US-sponsored alliance system to counter China, the delicate equilibrium in the Sino-Indian normalisation process is sure to get affected. It stands to reason that India's long term advantage lies in developing a new type of relationship with China based on equality, mutual respect, and balanced interests. At the end of the day, China remains a unique - even irreplaceable - source of investment and trade for India's development in the short and medium term, and nothing should be allowed to jeopardise it.

What explains the Modi government's reticence about signing the LEMA during Mr. Carter's visit? The only plausible explanation could be that the government is hard-pressed to explain how this paradigm shift in post-independent India's foreign and security policies is justifiable or is in the national interest. The nervousness hides a guilty conscience that without taking recourse to public discussions over the pros and cons of such a major policy shift and lacking a national consensus in the matter, the country is being hustled to go in this direction. A healthy democratic practice demands that the relevant issues in such a policy matter are debated in Parliament even if the LEMA is not a treaty that requires ratification. This was the course taken by the UPA government while concluding the India-US civil nuclear agreement in 2008.

The shocking thing in all this is that the Modi government stands on a platform of strident nationalism. The Sangh Parivar, which mentors the government, even claims monopoly to judge what is 'anti-national' on university campuses. And yet in this case the RSS in particular is betraying a comprador mentality by making India a junior partner to the US for reasons best known to it. The doublespeak is simply stunning. What explains such extreme vulnerability to US pressure? If the US expects them to bend, our hollow men are only too willing to crawl. What is their Achilles' heel? Their strident nationalism smacks of hypocrisy..

— The writer is a former Ambassador