Banking on bailout : The Tribune India

THE NDA government has spun a narrative that seems to have dazzled some observers that this government is now, after demonetisation and GST fiascos, embarking on bold economic growth measures. 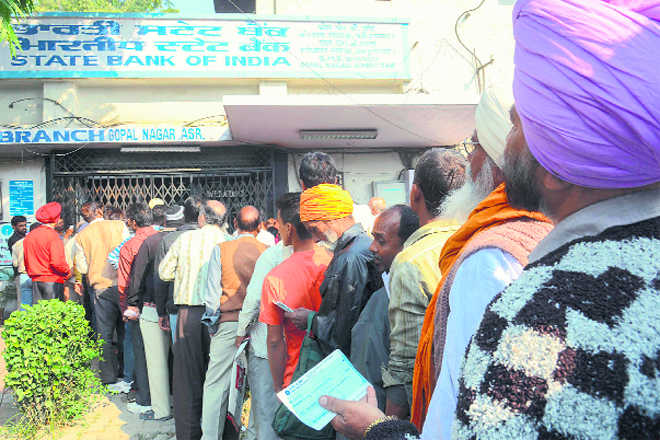 Dough-not: Loan defaults and NPAs have hit lending, which is affecting business.

THE NDA government has spun a narrative that seems to have dazzled some observers that this government is now, after demonetisation and GST fiascos, embarking on bold economic growth measures. Of this spinning narrative, the focus is more on recapitalisation of banks and less on the so-called infrastructure investment programme, the chief component of which is road building, with potentialities for job creation. In a country with one of the worst roads in the world and high unemployment, one has to be positive about the road-building projects even if it is merely a promise in the uncertain future.

Bank recapitalisation means increasing the stock of money that banks hold and can lend (the capital). The need for recapitalisation arises when there is a credit crunch in the market created by the situation when banks are reluctant to lend. This credit crunch affects businesses adversely because most businesses, small or big, in a capitalist economy are dependent on externally funded investment, including bank loans. When the paucity of loans available leads to a rise in lending costs, the borrowing costs for businesses rise. Consequently, the profitability of businesses and reinvestments by them get adversely affected. Recapitalisation, therefore, is meant to increase the lending capacity of the banks to give a fillip to faltering businesses. The term more commonly used in the advanced capitalist economies and which more appropriately captures the essence of a state’s helping hand to banks is called bank bailout.

Regarding the link between demonetisation and recapitalisation, the primary driving force behind demonetisation was the need for bank recapitalisation due to large loan defaults by 50 big businesses in India. The BJP, which has close ties with big business and drew major electoral support from the small and medium trading communities in its successful bid to power, was keen to return the favour by offering credit at a lower interest rate which could be possible only if banks had enough credit to lend.

The demonetisation proved a failure on two counts. It did not manage to mop up the expected money supply and secondly, the state-owned banks were hampered from performing one of their main activities i.e. providing facilities and incentives for savers. This disruption also affected state banks’ assets for lending. The significant failure of demonetisation is now sought to be rectified by this recent recapitalisation. The political purpose obviously remains the same i.e. to win over the support of the small and medium business owning communities. The political urgency is provided by the upcoming Gujarat election where this business community has a substantial electoral clout.

The primary reason behind the recapitalisation move is the hollowing out of the public sector banks’ assets by loan defaults by some of the biggest capitalist businesses in the country. This is given the technical name of non-performing assets to hide the ugly reality of plunder by big private business houses of the funds which are essentially public in nature. Top corporate houses, especially in the infrastructure and steel sector, borrowed massively from the public sector banks and this could be facilitated due to the support provided for such lending by the top political leadership which had influence with the public sector banks. Politics-bank-business axis had a full play here and this happened during the UPA regime but more brazenly during the NDA governments. Many of these loans turned sour eventually. One indication of this politico-economic structural malaise is that the gross non-performing loans at the public sector banks were 5.4 per cent in March 2015 and rose to as high as 13.7 per cent, in just about two years during the Modi regime, in June 2017. The charge of “crony capitalism” is not wholly inappropriate.

Finally, perhaps the most important aspect concerns the possible implications of recapitalisation. Whatever spin the government ministers or officials might resort to, this fact cannot be hidden that state funding of the banks is going to increase the fiscal deficit of the government. The experience of the advanced capitalist economies when these were faced with the financial crisis of 2007-2009 is important to remember. There was a terrible credit crunch due to the subprime mortgage crisis which originated in the US and had a quick contagion effect in Europe.

After the collapse of Lehman Brothers investment bank, there was a panic that many other banks might collapse. This led to bank bailouts by the governments in the US, the UK and Europe under the slogan of “too big to fail”. These bailouts were the primary source of the increased public debt in these economies, and this debt, in turn, was used to justify austerity policies which involved state cutting down on expenditure. The burden of this downsizing of the state fell primarily on low-income groups that were dependent on state’s welfare benefits. The rich bankers and financiers who created the crisis went scot-free due to the bailouts, but the poor who had no role in the crisis had to suffer due to the financial games played by the rich. It is with a time lag of about 10 years now that demands are growing that those who caused the crisis need to be taxed to claw back the immoral gains they had made.

India had a fiscal deficit of GDP of 3.5 per cent last year and the government had claimed that it would bring it down to 3.2 per cent during this fiscal year ending in March 2018. With unavoidable increase in fiscal deficit due to this bank bailout, how the government will meet this objective remains to be seen. It could increase the tax on the rich, especially the top 50 defaulters, which given the class character of the BJP, it is unlikely to do. Alternatively, it could increase the burden on the low-income groups,  both by cutting down state expenditure on various pro-poor policies or by increasing indirect taxes such as GST. These are the scary implications of this much-touted bailout.

The writer is Professor of Economics at Oxford Brookes University, Oxford