Amidst the election fever, news is in that one biopic each on dramatis personae Narendra Modi and Rahul Gandhi is set for release right in the middle of the poll season. 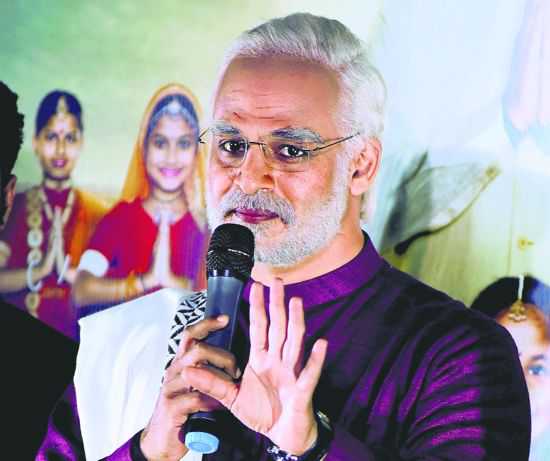 Amidst the election fever, news is in that one biopic each on dramatis personae Narendra Modi and Rahul Gandhi is set for release right in the middle of the poll season. The biopic on Narendra Modi, titled rather disingenuously as 'PM Narendra Modi', directed by Omung Kumar (of the 'Mary Kom' fame) and produced by Sandip Ssingh, alongside Suresh Oberoi, Anand Pandit and Acharya Manish, is slated for release on April 5, with actor Vivek Oberoi in the title role. On the other hand, the release date of spoof-ish-sounding 'My Name is RaGa', directed and produced by little-known Malayalam director Rupesh Paul, starring equally unknown actor Aswini Kumar in the lead, has not been announced, but it is also expected to hit the theatres sometime in April.

The makers of 'PM Narendra Modi' claim the film traces the journey of Modi's humble beginnings to his years as Gujarat Chief Minister, on to his landmark win in the 2014 Lok Sabha elections and his tenure as Prime Minister. Meanwhile, 'My Name is RaGa' apparently tells the personal and political story of Rahul Gandhi who becomes unstoppable after he overcomes catastrophic setbacks without glorifying him, according to its director.

Irrespective of what the filmmakers may say, given the timing and context, one can't help but suspect that the films are poorly disguised hagiographies being made with the express purpose of influencing the electorate. The Modi biopic was announced in early January and commenced production in late January, while the Rahul Gandhi film was announced in February, with the release of its trailer. Therefore, both are being made in a matter of weeks — a mindbogglingly, record-breaking speed by any standard.

Moreover, going by the gushing, fawning and obsequious comments of the entire film crew involved in making 'PM Narendra Modi', and the ridiculously melodramatic mushiness of the trailer of 'My Name is RaGa', any discerning observer can make out that the biopics are nothing but propaganda material to position their respective brands for the forthcoming elections.

Naturally, the question arises as to whether the biopics are in violation of the Model Code of Conduct since they would be playing in theatres during all phases of elections (assuming they are not colossal flops) and their publicity posters, trailers and campaigns would be all over TV and social media.

Speculation has been rife that the Election Commission is examining the matter but may not be able to do much because technically and legally, the films are private, commercial productions, not directly funded or promoted by the political parties concerned. It is also being argued that the Election Commission has no power to stop their release because film certification is beyond its purview and is the exclusive remit of the Central Board of Film Certification (CBFC). At the most, it seems, the Election Commission can request the CBFC to let it review the films to check for poll code violations or any content that might unfairly influence the electorate.

One of the immediate fallouts of the brewing controversy is that the makers of 'PM Narendra Modi' have suddenly announced that the release date of the film which was earlier slated for April 12, is now being advanced to April 5 ‘on public demand’. The hyper-patriotic trailer was also hastily released on March 20. This is, perhaps, a too-clever-by-half bid to pre-empt any action by the Election Commission, by creating the flimsy basis of a plausible deniability of the film influencing voters.

But will the Election Commission pretend to be satisfied by such maneouvres and allow itself to be rendered toothless? For, if it does so under the pretext that its hands are tied due to lack of technical and legal powers to combat this kind of surrogate publicity and proxy propaganda tools that exploit loopholes, a bad precedent will be set.

The chief guest at the release of the first poster of the Modi biopic in January was Maharashtra Chief Minister Devendra Phadnavis, while the second poster was to be unveiled by BJP President Amit Shah earlier this week, which had to be cancelled because of Goa Chief Minister Manohar Parrikar's demise. This clearly suggests that the BJP is associated with the film, even if there is yet no evidence that it has been funded by the party.

Still, if this is not proxy promotion, then what is? At the very least, it indicates that the film has the party's blessings or backing. So why shouldn't it attract the provisions of the Model Code of Conduct governing campaign films or Section 126 of the People's Representation Act, 1951 which prohibits canvassing 48 hours prior to elections? A similar connection might also exist in the case of the Rahul Gandhi film, although none has come to light yet.

There are, of course, many who will cite freedom of expression and creativity and the fact that a filmmaker has a right to make a film on political leaders or issues and release it at a time of his/her choosing for maximum political impact and commercial gains. The answer to that lies in postponing the release of both biopics to after the elections, so that reasonable restrictions on this freedom of expression are applied equally and fairly. As courts often say, the skies are not going to fall if both biopics are delayed by a few weeks, whereas creative freedom will remain intact. More importantly, the EC can send a message to parties that myth-making, at least through expensive biopics, cannot be used to dazzle voters during election time.