At the age of 80, Sharad Pawar has been addressing six-seven rallies a day in Maharashtra, which is going to the polls on October 21, along with Haryana. 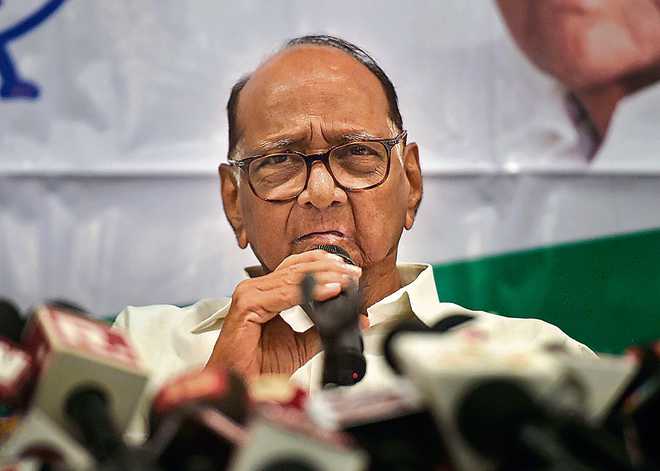 At the age of 80, Sharad Pawar has been addressing six-seven rallies a day in Maharashtra, which is going to the polls on October 21, along with Haryana. He gets on the dais with difficulty, sometimes the lectern is brought to where he is seated. He starts the day in the morning and ends after 10 pm when campaigning has to end. He has charged the NCP cadre but nobody knows how many seats his party is going to notch up.

It is his never-say-die spirit in adverse circumstances, which his audiences have noted (I caught up with him in Hadapsar and Mukundpur in Pune). A chat with those in the crowds showed that there was a sneaking sympathy for him, though even his party men are not willing to make a guess on the votes it would generate. His punch lines drew applause and were sharper this time against the Modi-Shah-BJP dispensation. He is clear that he is ‘their real target’.

But the ‘Maratha strongman’ of yesteryear is not looking at victory. He is fighting to retain the relevance of his party in state politics and for his own relevance inside the NCP, given the tensions that surfaced with his nephew Ajit Pawar, after he was named in the MSCB scam. Sharad Pawar voluntarily offered to present himself to the Enforcement Directorate in an attempt to turn the tables on the BJP. But Ajit Pawar succeeded in deflating that move when he threatened to quit politics and go underground. The family managed to paper over the divide, for the moment, but the open dissensions robbed the party—and the opposition in Maharashtra—a chance to counter the mega challenge mounted by the BJP-Shiv Sena, which is set to return to power.

In Karad, in the heart of Maratha land in western Maharashtra, former CM Prithviraj Chavan, is contesting the Assembly elections and is well regarded. Young people tell you they are voting for ‘Prithviraj baba’ because ‘he is a good man who has done good work’. His jeep carried a photo of him sporting the now-rarely-seen old Congress cap, and the words ‘Permanent Aamdar’. The Congress is using the slogan of ‘Peshwahi’ (referring to Devendra Fadnavis’ Brahmin credentials) vs ‘Shivshahi’ (rule of the masses). But he too is facing a challenge, given the BJP’s poll machinery, massive resources and strategy to weaken the Maratha base of the Congress and NCP, particularly in Western Maharashtra, and to confine the top leaders of the Congress who are contesting in their constituencies.

While Amit Shah made a point of campaigning in Chavan’s constituency, no senior leader of the Congress has been seen around the state in what could be a counter blitz. (Chavan had Yashwant Sinha and Shatrughan Sinha address meetings at Karad.) Rahul Gandhi has addressed a few meetings — again talking about Rafale. Essentially the Congress candidates were left to fend for themselves.

The BJP’s strategy has been to wean away those powerful political families in Maharashtra who exercised a hold in their areas through sugar factories cooperatives or educational institutions—once cultivated by Sharad Pawar or the Congress—in the absence of any base of its own. These are leaders afraid of being caught on the wrong side of the law, given the ghaplas that have existed in cooperatives or other institutions.

It is not that the Congress and the NCP do not have leaders. It is the absence of a coherent and coordinated strategy on their part to take on the BJP juggernaut. (The story is no different in Haryana.)

And it is the continuing fragmentation in the opposition ranks, even as they face an existentialist crisis, be it the inability to resolve the Hooda versus Tanwar fight in Haryana, or rein in Sanjay Nirupam in Mumbai, which has prevented the opposition from mounting the kind of battle that the Congress did in Rajasthan, MP and Chhattisgarh last year.

Sharad Pawar, hemmed in by dissension within the Pawar clan, could not even push through his offer to Chavan to stand as the NCP-Congress candidate in the Satara Lok Sabha bypoll. With the Satara MP, NCP’s Udyan Raje Bhosale, joining the BJP, Chavan was the best candidate to take him on. The battle would have charged the opposition cadre and given a new focus to ‘Battle Maharashtra’, even as Udyan Raje Bhosale enjoys an emotive connect with people, being the descendant of Chhatrapati Shivaji. But then, resentment has been growing against him, from his defection to potholes on the Pune-Satara road, leading to the cry, ‘No hole, no poll, no jhol’.

But Pawar had to withdraw his offer because of ‘lack of unanimity’ in his own party (read in political circles as opposition by Ajit Pawar, who the senior Pawar cannot afford to antagonise).

In the present round of elections, many more people were found expressing their grievances, be it the price rise of food items, hardships due to floods and widespread drought, joblessness, the loss of savings of depositors in the crisis-hit Punjab and Maharashtra Cooperative Bank that has sent shivers down the spine of many. The Modi charm has not waned, but there were many more people saying openly that they were ‘tired of words and promises’. In other words, there are signs of economic distress beginning to be felt. And yet, a large number plan to vote the BJP way again.

For all the problem the opposition has had of lack of resources, or losing its leaders to the other side—the Congress has shown signs of a hopelessness not evident before—it is the absence of a coherent, credible opposition to take on the BJP and its allies—both in Haryana and Maharashtra—that lies at the heart of the politics today. This is much more pronounced today than was the case in 2014 or in May 2019.