Break the ice & reach out to soldiers, forcefully

An expert panel to address service-related matters affecting armed forces personnel has made 75 recommendations. Streamlining will make the system more sympathetic to the needs of war widows, disabled and retired soldiers. 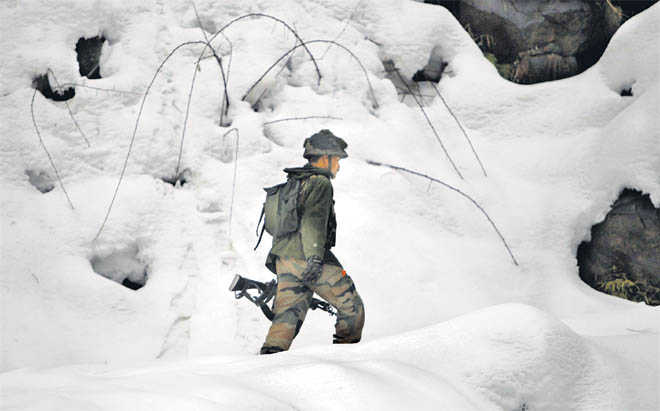 A soldier patrols near the LoC in J&K. Higher altitudes increase the risk of disease & disability.

A committee of experts constituted by the Defence Minister, Manohar Parrikar, to address service-related matters affecting armed forces personnel has,  in its report submitted a few days ago, put forth as many as 75 recommendations. These suggestions will make the systemmore conducive to aspirations of individuals. The Ministry of Defence (MoD) has an onerous task at hand as it finally wakes up to examine the maladies afflicting serving and retired armed forces personnel and their families and study the recommendations of the five-member committee. The issues covered were: Strengthening the mechanism of grievance redressal, reducing litigation, streamlining official procedures and improving service conditions. Also on the radar were, discipline and vigilance, optimising the use of social media and issues concerning civil employees.

The aim of the exercise, according to the committee’s concept note, is to “ensure the satisfactory redressal of grievances of employees at the lowest possible level”. It was also stated that the committee was looking into “progressive solutions to ensure a work culture of mutual trust and harmony where the interests of employees as well as the establishment could be balanced out and efforts be made to promote an environment of sustainable satisfaction which in turn would also boost the morale of employees.”

The MoD is bogged down with litigation against soldiers and veterans and multiple complaints from the rank and file about promotions and Annual Confidential Reports. The last decade saw an unprecedented rise in the number of appeals filed by the Ministry's Department of Ex-Servicemen Welfare against veterans, especially disabled soldiers, in the Supreme Court even in cases where the point of law has been well settled by the apex court.

Court petitions apart, the Ministry of Defence (MoD), Service Headquarters as well as political leaders have received a plethora of petitions, representations and letters from ex-servicemen, urgently seeking a revamp of the system and procedures.

There is also a growing feeling amongst the rank and file that their complaints and petitions within the organisation are dealt with by an overburdened military and civil bureaucracy in a mechanical manner simply on the basis of file notings moving up the chain of command, without due application of mind or giving an opportunity of hearing to the aggrieved. This ultimately leads to litigation in the courts.

The first challenge before the Defence Minister now is to remove the opacity in promotions and the processing of complaints filed by the defence personnel. A fair number of those spoken to perceive that these are disposed of unilaterally on the basis of "biased" inputs originating from immediate superiors through whom the complaint must pass. The second challenge is to ensure that the civilian and military bureaucracy does not treat litigants as "enemies of the establishment" by going all out to wage a war against them in higher courts through filing appeals in all cases decided against the Ministry or the Defence Services, as is the case at present.

Disabled soldiers have borne the brunt of apathy. Their disabilities are often declared "unrelated to service" by medical boards, thereby rejecting disability pension claims. This was in contravention of High Court and Supreme Court decisions where it has been ruled that all disabilities arising during service are normally deemed to be related to their job, conforming to the universally recognised inherent stress of military service. The other major challenge is bringing about reforms in the military judicial system to ensure the independence of the system of trials by court martial, an ad hoc assembly of peers that is perceived to be encompassed by "command influence." This has not seen any major change since the inception of the Parliamentary Acts dealing with the three services decades ago. Even the apex court, has in several cases commented adversely upon the military system of justice.

Within the defence establishment, sensitising the financial authorities which routinely reject disability and other claims of defence personnel, at times, by even overriding court judgements and decisions of competent executive authorities is another important arena. An attitudinal change has to be brought about within the establishment. Stress should be on resolving grievances in-house so that the courts and tribunals are not burdened by routine disputes. Aged servicemen and at times even widows, many from rural areas and with little resources, are often seen making the rounds of the courts, hoping for a change in their circumstances.

Redressal of grievances has been an issue. Even petty pensionary matters are not resolved and decisions rendered by the courts not implemented till contempt petitions are filed. There is lack of any judicial review against verdicts of the Armed Forces Tribunal (AFT), since on a plea of the MoD, the Supreme Court earlier this year opined that high courts would not hear challenges to AFT orders. This has practically made the AFT the first and final court for defence personnel and veterans since the AFT Act gives little leeway for filing appeals in the apex court. However, civilian employees can move the High Court and thereafter the Supreme Court against Central Administrative Tribunal orders.

Setting up such a committee, perhaps for the first time ever, has been welcomed by the defence community. The task ahead is tough. It’s not easy to activate a rigid system, marked by inertia of the past many decades to make it receptive to needs of the workforce. There is bound to be opposition from within the existing set-up to proposed changes. It is for the powers that be to holistically analyse the gambit of issues and take a firm stand to ensure necessary changes.