Bringing #MeToo to its logical finale

In the maelstrom over the disclosures of sexual harassment in the news media and the entertainment industry, one question begs an answer: how complicit are we all, really? In turning a blind eye sometimes or in counseling those targeted to ignore or even negotiate around the harassment, how much have we normalised a crime? 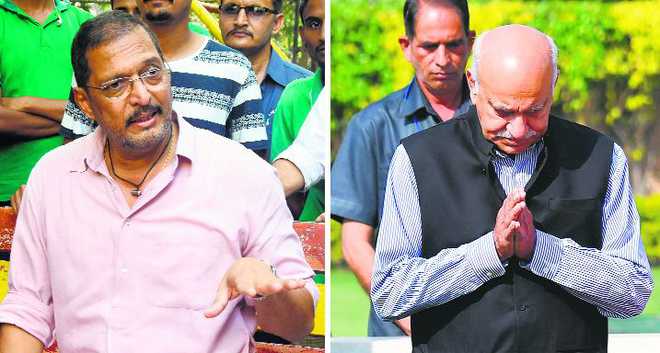 Named: Nana Patekar (left) and MJ Akbar are among the many accused of abuse.

In the maelstrom over the disclosures of sexual harassment in the news media and the entertainment industry, one question begs an answer: how complicit are we all, really? In turning a blind eye sometimes or in counseling those targeted to ignore or even negotiate around the harassment, how much have we normalised a crime?

Since October 5, when journalist Sandhya Menon began her series of tweets, starting from her harassment by KR Sreenivas, the resident editor of The Times of India in Hyderabad, other names have tumbled out. Some women began to send her messages about their experiences. The roll call of editors and senior journalists who had grossly misused their positions to prey on young colleagues included Gautam Adhikari, in his stint as resident editor in DNA and the Times of India and MJ Akbar, now Minister of State for External Affairs in the NDA government.

After actor Tanushree Datta spoke out on the shockingly inappropriate behavior of actor Nana Patekar, the #MeToo movement has scorched the entertainment industry, with the latest being the account of the rape and harassment of Vinta Nanda, producer of the TV serial 'Tara', by celebrated actor Alok Nath.

It is clear that this is only the tip of the iceberg. For all the accounts that have exploded on social media, there are several more that are yet unheard. There are chilling testimonies of women who have spoken up with courage, sometimes recalling events that happened over a decade ago with a clarity of detail, speaking frankly of their anguish and confusion at their experiences, alternating between blaming themselves and raging over the humiliation and invaluable loss of their careers and creative years.

While the accounts have included personal or partly social situations where colleagues or seniors have been predatory and abusive, the effect has been debilitating, often for years after. So many who have spoken out also talk of quitting the profession they loved, displacing themselves from cities they worked in or were familiar with, forced to rebuild their lives with little or no support.

Whether it is in the whisper networks or in the formal complaints lodged or the 'informal' accounts shared with seniors and colleagues, one thread runs through them — that workplace sexual harassment was rampant, that colleagues and seniors were aware of the predators and their behaviour and that when those who experienced the harassment did break their silence, they did not get justice.

For those who filed formal complaints with their media companies, the process of securing justice was long and painful, often ending without success and shams of enquiries rejected their complaints as insubstantial. They were warned that pursuing a 'false' complaint could lead to further reprisal and defamation cases against them. They were told that silence was the wiser option.

The Sexual Harassment of Women at Workplace (Prevention, Prohibition and Redressal) Act, 2013, mandates the setting up of Internal Committees (ICs) to deal with complaints, but many companies have not set them up. More often than not, the managements appoint members, compromising their independence and eroding the transparency necessary in their functioning. Yet, there were women who filed complaints and doggedly pursued their cases.

Today, the spate of accounts has elicited surprisingly swift and positive reaction.  Bennett Coleman and Co Ltd and Hindustan Times have announced that they will institute enquires on the allegations against Sreenivas and Jha. Adhikari has resigned from his position as a senior fellow of the Center for American Progress. Journalist Mayank Jain has resigned. The Cine and Television Artistes Association (CINTAA) has apologised for the past committee's handling of Datta's complaint and issued notice to actor Alok Nath over the rape charge.

Comedy group All India Bakchod (AIB) has cut off its association with writer Utsav Chakraborty and its founder-member and CEO Tanmay Bhat has been told to step away from his role. Phantom Films was dissolved after partner and director Vikas Bahl was accused of harassment of a female crew member. And the Mumbai Academy of Moving Image (MAMI) dropped AIB's Chintu Ka Birthday and Rajat Kapoor's Kadakh from its forthcoming film festival in Mumbai.

But while these are extremely encouraging signs that the media world is taking note of the groundswell of opinion against workplace harassment, there is a greater need than ever to discuss how the complaints will be handled, the transparency with which procedures will be laid down and the secure environment in which the complainants will be given an opportunity to depose. This is absolutely crucial to send across a message that there indeed is zero tolerance to sexual harassment at the workplace and that media companies are invested in a safe working environment for all.

There is still much to debate. We need to hear the voices of women of regional, non-English media and address the experiences of members of marginalised communities. But the silence has been broken. We can't go back to business as usual after the dust settles and the next big news-break.