Brothers in arms : The Tribune India

PRIME Minister Nawaz Sharif described his country’s relations with China as: “Sweeter than the sweetest honey”. Pakistan’s ambassador to China gushingly described the Sino-Pakistan relationship as: “Deeper than the ocean, higher than the mountains and stronger than steel”. 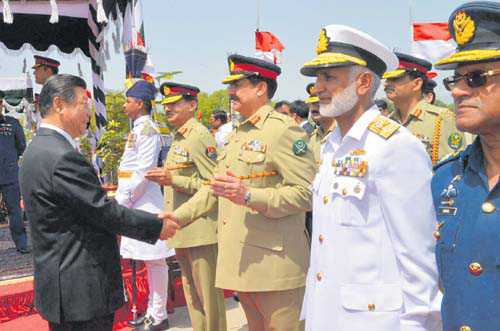 Best friends forever: The China-Pakistan ties have no parallel in the world.

PRIME Minister Nawaz Sharif described his country’s relations with China as: “Sweeter than the sweetest honey”. Pakistan’s ambassador to China gushingly described the Sino-Pakistan relationship as: “Deeper than the ocean, higher than the mountains and stronger than steel”. In the meantime, we are learning more about the real implications of this relationship, which is based on “strategic containment” of India.  The China-Pakistan relationship has no parallel anywhere in the world, as nowhere has any country transferred nuclear weapons designs, nuclear enrichment and reprocessing capabilities, ballistic missile designs and manufacturing facilities, as China has done to Pakistan. These details have been described in the book authored by the Washington-based scholar, Andrew Small, titled: “The China-Pakistan Axis: Asia’s New Geopolitics”.

The recent revelations of those involved in holding “offshore” accounts in Panama brought out the names of relatives of both Pakistan Prime Minister Nawaz Sharif and of Xi Jinping, China’s all-powerful President, who is also head of the Communist Party’s apex Military Commission. Following domestic political pressure, evidently backed by army chief Raheel Sharif, Nawaz Sharif’s influence has been further eroded. He has, however, hit back at the army, drawing attention to the protection from prosecution it has provided to General Musharraf who has acquired valuable properties in London and Dubai. The Panama revelations have also drawn attention to offshore accounts of the family/relatives of  Xi Jinping and of other top Chinese leaders. At least eight current and former members of the standing committee of the Communist Party politburo find distinguished mention in the Panama documents, as does Deng Jingui, who is President Xi’s brother-in-law. Deng has reportedly set up two companies in the British Virgin Islands.

While Sharif is showing signs that he is feeling the heat, President Xi has reacted defiantly, enhancing his already extensive powers. He is the first leader since Deng Xiaoping to head the party’s powerful Military Commission. He has gone a step further by nominating himself as the commander-in-chief of the country’s armed forces, while unprecedentedly clad in army camouflage uniform. This has predictably led to speculation of President Xi wanting to make sure that the army remains directly under his command. While Xi has taken a tough posture against corruption, it is well known that members of his family/relatives have wide-ranging business connections and interests.  It was also no secret that family members of former Prime Minister Wen Jiabao, led by his mother, had business assets exceeding $2 billion.

All this is occurring when China is going through a painful economic transition. Its export-driven economic growth over the past three decades has been unparalleled in contemporary history, with growth rates of around 10 per cent over the past two decades. While its present growth rates of around 6.9 per cent may appear problematic for China, it is still around the highest in the world. But the days of China being the sole exporting hub for manufactured goods are slowly declining. As China moves towards becoming a consumption-based economy, huge capacities built for manufacturing will have to be shut down, though some relief can be obtained from supplies to ventures abroad like its Silk Road economic belt and the Maritime Silk Road. With the prospects of growing unemployment, as surplus capacities in manufacturing are shut down, one will likely be staring at the face of a jingoistic China ready to divert attention by becoming more aggressive on its maritime and land border claims.

While China would remain primarily focused on its maritime boundaries, it will also be unlikely to agree on issues like demarcating the Line of Actual Control along its borders with India.  But both countries will gain by moving ahead with confidence-building measures and better communications between the border forces. Xi Jinping has restructured the command of the PLA along borders with India, with a unified command now established in Chengdu. China appears unlikely to embark on a large-scale military adventure, though pressures will be maintained for keeping us unsettled along our borders. Nothing, however, can be taken for granted. New Delhi would be well advised to hasten the establishment of a Mountain Strike Corps and modernisation of its air power. Beijing’s “one belt one road” initiative across Pakistan, involving an investment of $46 billion, and its virtual takeover of the Gwadar Port in Baluchistan will require new initiatives by India, involving regional and extra-regional powers, to balance Chinese maritime power across the sea lanes of the Indian Ocean, which will be reinforced by continuing supplies of submarines and frigates to Pakistan.

We should have no illusions of how China views India. Beijing has built Pakistan’s nuclear, missile and conventional arsenals. It welcomes political leaders and visitors from POK and Gilgit-Baluchistan, while treating visitors from J&K on an entirely different footing. It denies normal visas to Indian nationals from Arunachal Pradesh. Beijing aids and trains members of Northeastern insurgent groups like ULFA, along the Myanmar-China border. It seeks to constantly undermine Indian influence and promotes anti-Indian forces in all our SAARC neighbours. It blocks India’s membership in multilateral forums like the Nuclear Suppliers Group. It protects Pakistan-based terrorist groups like the LeT and JeM from international sanctions in the UN.

Given China’s domestic economic and political problems and its aggressiveness with neighbours, there has to be a sustained dialogue to address tensions that will arise periodically along the Sino-Indian border. The trade, economic and investment relationship with China should be expanded. New Delhi should continue cooperation with China in forums like BRICS, the Asian Infrastructure Bank and G20. China’s policies of undermining India’s relations with its South Asian neighbours should be countered by a robust relationship with China’s maritime neighbours like Vietnam, Japan and the Philippines. Military exercises with the US, Japan, Australia and Indonesia in the South China Sea and the Indian Ocean should be expanded.  Military cooperation with Vietnam must include supplies of Brahmos Cruise missiles, which will serve as a deterrent to Chinese maritime adventurism. Given China’s links with armed separatist groups in the Northeast, India need not be apologetic about the Dalai Lama’s presence in India, or about the carefully nuanced support for democratic and religious freedoms. India must adopt a policy of cooperation combined with containment, in partnership with like-minded powers, in dealing with China.