RECENT reports of failed eye surgeries in several hospitals of Haryana have brought into focus the failure to ensure vision to cataract patients even after successful surgical procedures by experienced surgeons and observance of operation theatre (OT) protocols. 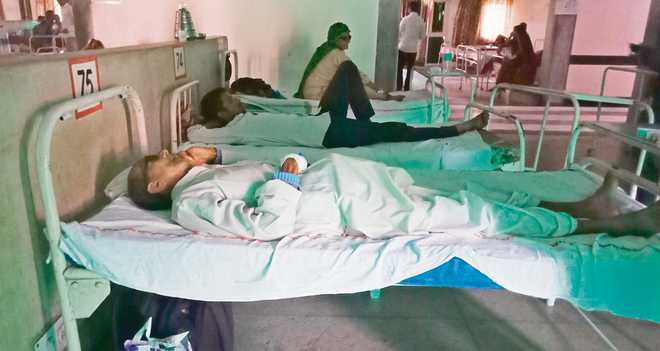 Alarming: Only one out of five doctors in rural India are qualified to practise medicine or surgery, as per a World Health Organisation report.

RECENT reports of failed eye surgeries in several hospitals of Haryana have brought into focus the failure to ensure vision to cataract patients even after successful surgical procedures by experienced surgeons and observance of operation theatre (OT) protocols. Studies reveal that such incidents have been occurring across the nation in private as well as public hospitals. Adverse events do occur with some frequency after any surgery, including eye surgery, but should the blame squarely lie on the operating surgeons? The failure of the surgery, coupled with the charge of negligence against doctors, obfuscates the underlying core issues and unduly exposes the doctor to the hysterical anger of society, physical assaults, and avoidable litigation by the patient’s kin. While most consumers have come to expect defect-free electronic gadgets, medical scientists are loath to accept the same perfection in the delivery of surgical care.

Various investigations and studies have revealed that the cause of infection was detected in the fluids, medicines or instruments used in the surgery, in which doctors had no role to play. In a judicial review of failed eye surgeries, the Madurai Bench of the Madras High Court had acquitted the doctors of the charge of negligence, while observing that “the prosecution had failed to prove that doctors had any motive to cause harm.” No lack of skill or negligence was proved in the court.

There are several factual and ethical issues regarding the practice of surgery that have plagued the outcome and its acceptance: (i) A cure or good outcome cannot be guaranteed, only possibilities can be predicted; (ii) Inadequate knowledge about the incidence of adverse events; (iii) Inadequate practice guidelines or protocols; (iv) Failure to appreciate the fact that the surgeon is only one player in the long chain of service and material providers; (v) Existence of hospital-acquired infections in almost all hospitals; (vi) Expectation of five-star facilities even in free camps; (vii) Need to compensate affected patients; (viii) The practice of blame game; and (ix) Doctors are soft targets.

According to the Oxford Dictionary, botching a task means to “carry it out badly or carelessly”. In the medical field, it means lack of skill, or negligence on the part of the surgeon. That is not a fact in the case of failed eye surgeries. Barring exceptions, most of the surgeons of failed surgeries had long experience, adequate qualifications and surgical skills. However, in some cases, the major reasons were the callousness of the supporting staff in the OT, insanitary conditions in and around the place of surgery or recovery, unhygienic conditions at home after discharge, existing infection in some other organ of the patient or his care-givers, or the failure to comply with the antibiotic regimen or other medication in the pre- or post-surgical period. No doubt doctors need to counsel patients about the risks of eye infection and its prevention. But can the surgeon ensure compliance?

Only one out of five doctors in rural India are qualified to practise medicine or surgery, as per a World Health Organisation report on the country’s healthcare workforce. Many unqualified doctors used to conduct free eye camps. Such surgeries used to compromise on several counts: unhygienic surroundings and set-up, inappropriate OT, inadequate or unclean water for surgeons’ hand wash, untrained assistants, unsterilised linen, dirty and blunt instruments, poor quality of fluids and medication, lack of follow-up after surgery, and lack of awareness among family members to look after the operated patients at home. Some quacks may still be operating.

The failed surgery would generally drive patients to hospitals like the PGI and make it worse for the already choked services. Despite technology, skill and commitment at these centres, the outcome would be dismal in a large number of such cases. No hospital can guarantee cure or absolute protection against adverse outcomes. The media had carried reports of an adverse occurrence in the Advanced Eye Centre at Chandigarh’s PGI about three years ago. A score of patients suffering from retinal problems were given avastin injections in their eyes. All those injected with a particular batch of the drug developed inflammation in the eyes. It was after a great effort that these eyes could be saved.

Similarly, things can go wrong in the case of other eye surgeries. Lasik (laser-assisted in situ keratomileusis) is an example. Eye specialists receive dissatisfied patients off and on, who were expecting to get rid of spectacles after a Lasik operation. In the case of a 21-year-old woman, hopes of a spectacle-free look were dashed soon. She was left with the feeling of being stabbed in the eyes with ‘pins and needles’. A few others were driven to suicidal tendencies due to perpetual pain, discomfort, dryness, disorientation, headaches, nausea and the inability to drive or work. Morris Wexler, the man who led the US FDA (Food and Drug Administration) team that approved Lasik two decades ago, now says it was all a mistake! There is a need for a warning message for each case considering Lasik.

Several whistleblowers have highlighted scams and manipulation issues in the pharmaceutical industry from time to time. The country needs strict criminal prosecution against the suppliers of substandard drugs on the one hand and over-pricing on the other. Despite some recent reforms, the pharmaceutical sector is not marketing uniformly standard medicines, injectables, fluids, devices etc. If the infection occurs due to poor quality of drugs, who should be tried?

Once substandard medicines are banished from the market, many issues of ‘botched’ surgeries will subside. This will also develop faith in generic medicines and the poor will get affordable healthcare.