CARBON security means ensuring safety of both energy and the environment. 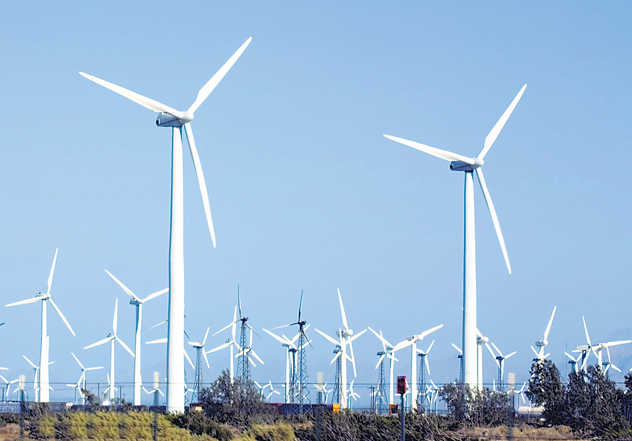 Need to harness wind and solar energy for future requirements.

CARBON security means ensuring safety of both energy and the environment. They are two sides of the same coin. Natural resources are invaluable, so it is critically important to conserve them for use, not just for us and our children, but for future millennia. Carbon security for India thus means ensuring consistent and assured supply of energy while simultaneously providing that carbon emissions do not cloud the environment.

As for energy security, it connotes that fuel supplies should be available, not just in normal times, but even during an emergency like war or natural calamities like an earthquake. The environmental aspect of  carbon security is the need to reduce carbon emissions by gradually shifting from highly polluting forms of energy to less harmful  forms. Hence the need to move from the use of fossil fuels like coal and petroleum to cleaner ones like natural gas, and also to renewable energy sources like solar and wind power. Nuclear power is part of the mix, but needs to be utilised with great care, given the experience with accidents all over the world.

At this stage of the country’s development, energy is a high priority. But in the long run, environmental issues need to be given equal prominence even though India is far behind other countries as far as carbon emissions are concerned. In terms of per capita emissions, it  may be considered the world’s third-largest polluter, but the carbon footprint of each Indian is a mere 1.6 tonnes per year as against 16.4 tonnes per person in the US.

Unlike developed countries, however, pollution here comes from a wide variety of sources, many of which are linked to poverty. Vehicular emissions may seem to be the biggest culprit, but the bigger one is burning of biomass fuels for cooking in rural areas. This is an immediate threat to the health of millions of people in rural areas. According to the 2011 census, as many as 87 per cent of  people in rural areas still use bio-mass fuels for cooking which includes wood, cow dung or crop waste. There is great urgency, therefore, in ensuring that they shift to other cooking fuels as rapidly as possible.

In urban areas, on the other hand, it is essential to curb vehicular pollution by enforcing Euro IV and V emission targets. Another environmental hazard is adulteration of diesel with kerosene, and the extensive use of diesel in commercial and passenger vehicles.

What then is the way forward for environmental security? Ultimately,  it has to be in terms of reducing the use of fossil fuels and moving to renewable energy sources. Even among renewable sources, the preference should be towards solar and wind power. Nuclear power has the disadvantages mentioned earlier while even hydel power is not viewed favourably by environment experts owing to the impact on surrounding areas.

In such a scenario, the government’s projection that 40 per cent of power demand would be met by renewable energy sources by 2030 is heartening. But whether this ambitious target can be achieved is doubtful, given the continued dominance of fossil fuels.

Regarding the energy aspect of carbon security, it is the prime issue of concern at this stage of the country’s development. In the case of all three critical fossil fuels — petroleum, natural gas and coal — imports are essential to meet demand. As for petroleum, as much as 80 per cent of crude oil needs are sourced from abroad. Fortunately, world prices have crashed by 50 per cent over the past year. As a result, the import bill which touched $144 billion in 2012-13 may fall to $88 billion in 2015-16. In addition, to ensure security in times of crisis like war or natural calamities, the government is in the process of implementing a strategic reserves project which envisages stocks of  around 5 to 6 million tonnes in underground caverns.

Yet another security issue is the need to ensure the safety of oil shipments to India. Crude oil coming to India has been facing threats from piracy off  the North African coast as well as in the Indian Ocean. Greater vigilance is needed by the Indian naval authorities to protect these vital oil supply routes.

A related fuel, natural gas, has much the same issues as petroleum. Domestic output is not sufficient to meet growing demand and imports of liquefied natural gas (LNG) have risen by 335 per cent over the past decade while domestic output has risen by only 10 per cent. Efforts are being made to tie up long-term supplies by becoming part of international gas pipeline projects like TAPI (Turkmenistan-Afghanistan-Pakistan-India). Security issues may get in the way of its implementation, however, just like earlier proposals for an Iran-Pakistan-India pipeline.

Regarding coal, the fact is that about 80 per cent of power generation relies on coal while steel and other industries are also heavily dependent on the mineral. Imports have been rising rapidly and these may touch 200 million tonnes in 2015-16 as against 180 million tonnes in 2014-15. India may soon become the world’s largest coal importer. The environmental cost of this fuel is enormous, but phasing it out looks unlikely in the near or medium term.

Coming to renewable energy sources like solar and wind power, their importance  cannot be over stated. A bold step has been taken by making a fivefold increase in the target for creating solar energy capacity by 2022. But lessons need to be learnt from countries like China which produce much cheaper solar-powered batteries than India.

While much can be said about carbon security issues, what is most important is the formulation of a coordinated energy policy. It has been talked about for years, but not achieved by any government so far. This will only be possible when a single over arching energy ministry is created which prevents turf wars naturally existing between various departments. The present government has moved in that direction by having a single minister for coal, power and renewable energy, but it is still incomplete without petroleum in the mix.

In the long run, hydrocarbon resources are limited so one needs to have a visionary outlook. It is time to look beyond the coal and petroleum sector. Solar and wind power are the sunrise industries. True carbon security will only take place when fossil fuels are replaced by renewable energy sources and that seems to be very far in the future.