Chanakya of Tamil politics is no more : The Tribune India

Chanakya of Tamil politics is no more

Karunanidhi became involved in politics when the anti-Hindi agitation was building up in the state and he began distributing bit notices, putting up posters and collecting students for the agitation rather than on studies. 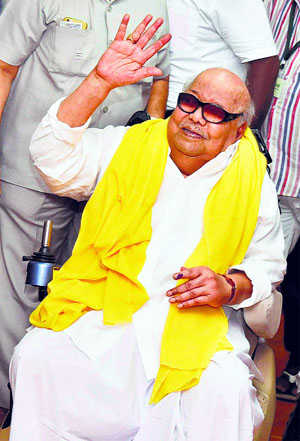 Karunanidhi became involved in politics when the anti-Hindi agitation was building up in the state and he began distributing bit notices, putting up posters and collecting students for the agitation rather than on studies. At the age of 14, he started a hand-written magazine which grew into a prominent daily called Murasoli. His political activities brought him close to Annadurai and Periyar, the two dominant leaders of the cultural change taking place in the state. Periyar took him as a Sub-Editor in his magazine Kudi Arasu.

This opened the doors of the film industry to him and he soon established himself as the leading dialogue writer for Tamil films, bringing him into the circle of MGR and Sivaji Ganesan apart from many other prominent figures of the day.

Meanwhile, an agitation against the imposition of Hindi as the only national language gained momentum and Karunanidhi was in the forefront of a huge mass movement leading to his arrest and imprisonment in Vellore.

For the 1967 elections, Karunanidhi was given the target of ten lakh rupees as funds for party. He crossed the target and collected Rs. 11 lakh, thus earning the nick-name of 11-lakh Leader.

The Self-Respect Movement sought to change caste disparities in Tamil Nadu and was an assertion of a Dravidian identity that refused to be dimmed by a spread of Aryan culture. The rejection of Aryanism focused on the rejection of the Hindu concept of God and the rejection of Lord Ram as a common divine symbol for the country.

The Self-Respect Movement rejected rituals, and propagated marriages where there were no pundits and no mantras.

The DMK secured a massive victory in the elections of 1967. Annadurai became the CM and Karunanidhi his PWD minister. After his death, Karunanidhi displayed his Chanakya-like talents to pip the more accomplished Nedunchezhian to the post. He set up a committee to study centre-state relations and changed the tradition of the governor hoisting the national flag on the Independence Day by taking the role upon himself.

By now, Karunanidhi had the political game in his grip. After the split in the Congress in 1969, DMK extended outside support to the Indira Gandhi government at the centre. An alliance with the Congress brought an impressive victory to DMK in 1971.

Karunanidhi and MGR had close association in politics, in the film industry and in sharing political power. Possibly, Karunanidhi began to fear the rise in MGR's popularity and rejected his request for a ministerial post. MGR launched an attack on Karunanidhi leading to his expulsion and weakening of the DMK. To widen his popularity, he increased the reservation for the backward classes and bullied the Centre into setting up a steel plant at Salem.

In 1977, MGR's All-India Anna DMK defeated the parent party. For the next decade, MGR sat firm in the seat of power and Karunanidhi had his days of eclipse. MGR had a way of popularising himself with the masses that Karunanidhi could not counter.

The death of MGR in 1987 led to Jayalalithaa gaining control and becoming the next challenge for Karunanidhi. Their relationship was were very bitter and Karunanidhi would make sexist remarks about Jayalalithaa, adding to the bitterness. The tension between the two leaders attained its peak when Jayalalithaa was arrested under Karunanidhi's tenure as CM and when she returned the favour after coming to power.

At the turn of the century, coalition politics at the Centre brought DMK into the position of a king-maker. Karunanidhi, the shrewd politician, exploited this to the hilt and Tamil Nadu became the fulcrum on which the government of the centre would rest.

His greatest achievement was to bring Sonia Gandhi into a political alliance with the DMK, in spite of the general impression that the LTTE had all along received support from Karunanidhi.

Karunanidhi combined his qualities as a leader and an artist to build himself into a figure much larger than life. Karunanidhi as a leader and as a Chief Minister was easily accessible to his party workers. He was connected to the ground-level politics and knew what each of his ministers and MLAs was doing.

Karunanidhi was not a politician who came, occupied the powerful position of a CM and then passed into oblivion. Karunanidhi stood at the centre of a movement that asserted a language and race-based identity of the Tamil people.

An exceptionally powerful speaker, Karunanidhi, as CM made fundamental changes in the administration of the state. He enhanced the percentage of reservation for the socially deprived, introduced reservation for women and established townships where there was no difference of caste and creed. He also brought about significant improvement in school education.

Karunanidhi was not immune to the culture of nepotism that gripped other satraps of socio-political change such as the Badals, Chautalas, Mulayam and Lalu Yadav and the Thackerays. Nor did he have any ideological blinkers about aligning with the BJP to share a pie of power at the Centre. The business and media empire built by his relatives came under close scrutiny. Some of their shenanigans proved fatal for the UPA coalition in its battle of perceptions in the 2014 polls.

Having misread the 2014 Lok Sabha and the 2016 Tamil Nadu assembly polls, Karunanidhi passed away at a crucial juncture: his family-led party with son Stalin as the apparent heir is poised to play a major role in an Opposition gathbandhan. This will be the first time in 50 years when the familiar figure with dark glasses will not be on the centre stage.