China’s recently released White Paper on defence did not get the attention it should have in India. 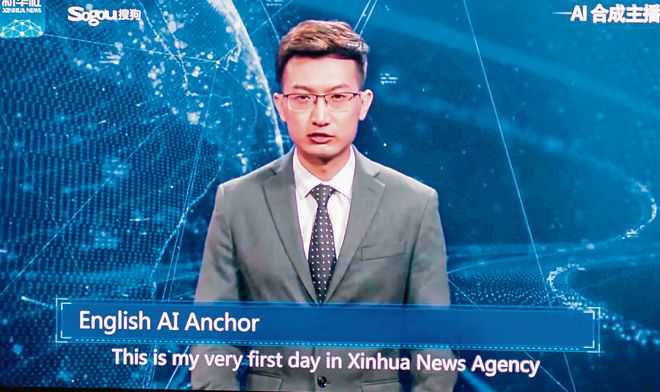 Next level: China is optimally exploiting AI, giving the US a run for its money.

China’s recently released White Paper on defence did not get the attention it should have in India. In our obsession with Pakistan, it is forgotten that China is the neighbour we need to worry about.

China claims 90,000 sq km of Arunachal Pradesh, does not accept the border with India in Ladakh and has achieved military interoperability with Pakistan. Except for India and Bhutan, all nations in South Asia have joined the OBOR project. Post-Doklam, the People’s Liberation Army (PLA) presence in Tibet Autonomous Region has increased substantially. In June 2018, Chinese President Xi Jinping told the visiting US defence secretary, James Mattis, that China would not lose an inch of its territory handed to them by their ancestors.

The paper underlines four peculiarities of PLA’s changing warfare. The first is its exceptional spectrum (short for electromagnetic spectrum, EMS) warfare capability, where by blinding India’s military assets, the PLA could end the war before it is joined, hence winning without fighting. This non-kinetic warfare will be in cyberspace, in which high-grade malware (malicious software) is injected into the spectrum that connects the target engagement cycle comprising satellites, airborne sensors, command centres, missiles and other interceptors through data-links. All modern weapons — airplanes, tanks, satellites, ships, radio — depend on the spectrum to function. By pushing malware into data-links, military assets are blanked, disrupted or debilitated. The war, then, is as good as over.

The Indian military is not prepared for PLA’s cyber offensive, central to its operational strategy. The PLA has consolidated its space, cyber, electronic warfare and psychological warfare assets under the unique Strategic Support Force, which ‘has made active efforts to integrate into the joint operations system. It has carried out confrontational training’.

The second unmatched peculiarity is the PLA Rocket Force, which has under it all nuclear and conventional ballistic, cruise, and soon to be acquired hypersonic missiles. The force ‘has organised force-on-force evaluation-oriented training and training based on operational plans at brigade and regiment level, strengthening training for joint strikes’. The PLA will use its plethora of missiles by itself and to supplement (not as substitute) its air force. India cannot meet this challenge because it has limited numbers, and the PLA with its indigenous and automated production lines can deliver unending salvos of smart, long-range and precise missiles.

The third PLA peculiarity is its mission ‘to safeguard China’s oversea interests’ to include its infrastructure and people. The PLA’s presence would continue to increase in nations which have accepted OBOR. This is being done by the office of international military cooperation, raised during the 2015 reforms, which reports to the Central Military Commission headed by Jinping. Regular interaction between the PLA and militaries of OBOR nations would lead to better understanding of Chinese arms exports and interoperability, and possibilities of PLA air and naval bases or ‘support bases’ there.

The underplayed Digital Silk Road with vast security implications would increase its footprints alongside OBOR’s growing presence. China is building fibre optics cables, mobile structures for installing Huawei 5G wireless technology to introduce common technical standards in these nations. The militaries of these nations would soon be connected to Chinese BeiDou navigation satellite system for e-commerce and military needs.

With the launch of the world’s first intercontinental quantum satellite called Micius in 2016, China has demonstrated long distance cryptography service for secure communications which can’t be hacked. It is expanding quantum communications infrastructure; quantum radar and sensing which would defeat stealth technologies; and quantum compass for submarines.

The fourth peculiarity is ‘the application of cutting-edge technologies such as AI, quantum information, big data, cloud computing and the Internet of things is gathering pace in the military field’. These technologies will shift warfare to virtual battlefields. For example, today a smart cruise missile should be more than ‘fire and forget’ semi-autonomous weapon. It should also have assured data-linking with rear for continuous instructions till desired target is hit. An AI-driven intelligent cruise missile need not have data-linking which is vulnerable to cyberattack. It will do the entire engagement cycle on its own.

In terms of revolutions in warfare, AI-driven warfare where China, if not competing, is giving a run for its money to the US, is the consequence of the fourth revolution. The earlier revolutions were wrought by the steam engine, the age of science, and the rise of digital technology. Since doctrines follow technology, China has taken lead in developing disruptive thinking in warfare to optimally exploit AI. The new military strategic and doctrinal thinking would have little or no resemblance with present warfare.

China wants to complete the modernisation process by 2035, and fully transform the armed forces into world-class forces by the mid-21st century. This means the PLA would achieve human-machine (robot) fusion by 2035, and with the arrival of quantum computers, it would have machines more intelligent than humans.

The Indian military is still entering the digital age. In multi-domain warfare, all domains like air force, army and navy are mere tactical units much like cyber, space, and electronic warfare. Thus, when services’ chiefs say that their service, on its own, is ready for all contingencies, they are talking of fighting the last war, not the next one.