APART from the formation of a ministerial-level group to discuss bilateral trade issues, the only positive development of the Narendra Modi-Xi Jinping summit meeting was that it was held in a cordial atmosphere and that one more will follow next year. 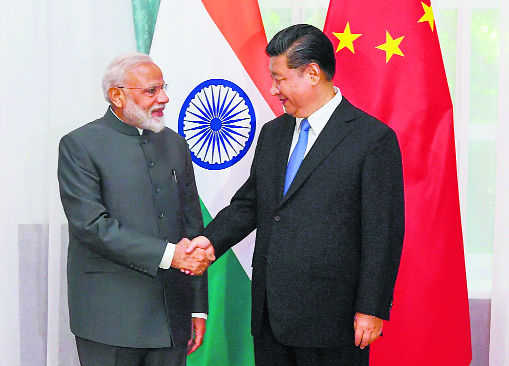 APART from the formation of a ministerial-level group to discuss bilateral trade issues, the only positive development of the Narendra Modi-Xi Jinping summit meeting was that it was held in a cordial atmosphere and that one more will follow next year. None of India’s core concerns, like the resolution of the territorial dispute, were addressed.

China opposes India with a vengeance at international fora. It has repeatedly blocked India’s application for membership of the Nuclear Suppliers Group (NSG). China’s technical hold on Masood Azhar, head of the Pakistan-based terrorist organisation Jaish-e-Mohammad (JeM), being designated an international terrorist by the United Nations sanctions committee was recently lifted very reluctantly. Although India was finally admitted as a full member of the Shanghai Cooperation Organisation (SCO) at the Astana summit on June 9, 2017, China made sure that Pakistan was given the same status simultaneously.

In the past, China has objected to India’s Oil and Natural Gas Commission (ONGC) prospecting for oil off the coast of Vietnam, even though the area was within Vietnam's territorial waters. China, of course, claims the complete South China Sea as its territorial waters in complete disregard of the Law of the Sea Treaty.

China's leadership loses no opportunity to show its annoyance with India over even inconsequential issues. In March 2017, the Chinese Foreign Ministry issued a statement saying that it was ‘strongly dissatisfied’ with India for inviting the Dalai Lama to open an international Buddhist conference in Nalanda, Bihar. Beijing protested even more loudly when the Dalai Lama visited Tawang in Arunachal Pradesh a few weeks later. China claims the state of Arunachal Pradesh as its own territory.

Chinese state-controlled media have made it a habit to periodically warn India of dire consequences on one pretext or the other. Global Times, a Communist Party-controlled English language newspaper, has led the charge. A commentary in the paper in 2017 warned India not to ‘meddle’ as China’s Defence Minister visited Nepal and Sri Lanka.

Around the same time, an editorial threatened to engage India in a ‘geopolitical game’: “With a GDP several times higher than that of India, military capabilities that can reach the Indian Ocean and having good relations with India’s peripheral nations, coupled with the fact that India's turbulent northern state borders China, if China engages in a geopolitical game with India, will Beijing lose to New Delhi?” ‘Turbulent northern state’ clearly refers to Jammu and Kashmir (J&K).

China showed no concern for Indian sensitivities while finalising plans for the China-Pakistan Economic Corridor (CPEC) that will pass through Gilgit-Baltistan, an area that is part of J&K, but under Pakistani occupation. India’s refusal to participate in President Xi Jinping’s Belt and Road Initiative prompted Global Times to once again warn India that its shortsighted attitude could damage Sino-Indian relations.

On other occasions, Global Times has advised India not to play the Taiwan card. After India had tested the Agni-4 ballistic missile, an editorial pointed out ominously that if the development of long-range missiles by India continues, “the range of Pakistan's nuclear missiles will also see an increase.”

Commenting on the establishment of the India-Afghanistan direct air freight corridor (Pakistan denies India access to Afghanistan through the land route), Global Times called the plan India’s ‘stubborn geopolitical thinking’. China is deeply suspicious of the growing Indo-US strategic partnership and on the eve of Prime Minister Modi's meeting with President Donald Trump, it put out that a close watch would be kept on what is discussed.

Clearly, despite a stable relationship at the strategic level, China is annoyed with India and the reasons are not difficult to discern. China thinks of itself as a great power and, as part of its grand strategy, seeks to dominate the region and gain geopolitical influence. Also, the Chinese leadership believes in China’s “political, social and cultural superiority over its neighbours.” In short, the Chinese believe that their civilisation is far superior to the civilisations of China's neighbours.

According to a Chinese saying, “One mountain can accommodate only one tiger.” The Chinese look at themselves as the tiger on the Asian mountain and, in their view, there is no place for a second tiger like India. If India were to play second fiddle, if Prime Minister Narendra Modi were to carry a platter of gold coins and pay obeisance to ‘King Emperor’ Xi Jinping every year, the Chinese would welcome their Indian brothers with open arms and radiant smiles. There would be more shouts of the deceptively enthralling slogan of the 1950s: Hindi-Chini, bhai-bhai.

Unfortunately for China, that is not how the script plays out in India’s scheme of things. India is conscious that China’s growing power and influence pose a long-term strategic challenge, not only for India but also for the entire Indo-Pacific region. However, India is itself growing at a rapid rate and is confident of closing the gap.

Resurgent India, poised at a breakout moment in its history, looks at itself as a co-equal power in Asia — a rising power that is conscious of its regional responsibilities and increasingly more willing to contribute positively to peace and stability in the Indo-Pacific region and the security of the global commons.

The China-India geopolitical standoff is a clash of two competing world views. China is engaged in the strategic encirclement of India through its proxies like Pakistan and its ‘string of pearls’ strategy in the northern Indian Ocean. In the South China Sea dispute as well, China has exhibited a remarkably high order of belligerence. To counter China’s increasing military assertiveness, India should join hands with the United States and other strategic partners, such as Australia, Japan, Singapore, South Korea and Vietnam, to establish a cooperative security framework for peace and stability in the Indo-Pacific.

Finally, as long as the territorial dispute with China is not resolved and transgressions by patrols from the People’s Liberation Army (PLA) continue across the Line of Actual Control, India should keep its powder dry.