THERE have been new twists and turns each day in the rape case filed by a nun from the Roman Catholic congregation of Missionaries of Jesus against the Bishop of Jalandhar. 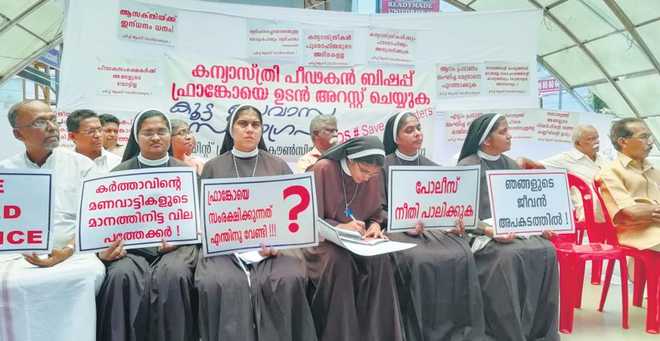 AS ONE: Hundreds of nuns and priests have come together to support the victim.

THERE have been new twists and turns each day in the rape case filed by a nun from the Roman Catholic congregation of Missionaries of Jesus against the Bishop of Jalandhar. But the crux of the matter is that even after 75 days of filing the FIR, the Bishop has not been arrested despite there being prima facie evidence of his culpability.

The inaction by the state is attributed to the complicity of the Roman Catholic Church hierarchy which is backing the Bishop either overtly or covertly through its silence,  which has become a matter of shame and disgrace for all Christians in India, and for Christian women in particular. But the abuse of women and nuns by the clergy has been an issue waiting to be explored. The case filed by the nun has only helped to kindle the flame of discontent among nuns and the laity in India.

The victim in her letter addressed to the Apostolic Nuncio (the Vatican's Ambassador to India) in her own name and marked to over 20 heads of various Christian religious institutions, and the president of the highest authority of the Church in India, the Conference of Catholic Bishops of India (CCBI), on September 8 has documented the entire sequence of events regarding the situation under which the sexual abuse had taken place and the efforts made by her to bring it to the notice of the church hierarchy.  The letter  blames the church authorities for wielding adverse influence upon the state machinery for thwarting the criminal procedure under the law of the land. Her plea is for justice, both from the state as well as the church. 'Will the church authority who are standing by Bishop Franco (the accused) and are safeguarding the dignity of the church by hiding his wickedness, be able to give back what I have lost?' she asks in anguish.

She also explains the reasons for the delay in filing the FIR. 'I had tremendous fear and shame to bring this out into the open. I feared suppression of the congregation and threats to my family members.' She also states that she wanted to leave the congregation due to the abuse and had sent a letter to this effect, but did not because five other nuns also expressed their wish to leave with her, which would have caused a great setback to the congregation. Now that she has come forward and filed a complaint, she asks, 'Why is the church closing its eyes when I have mustered the courage to speak out in public against the abuse?'

I do not know whether the Nuncio or the CCBI president have responded to this five-page letter, but a public response to her has come from a sitting MLA, PC George, ironically on the very next day of her sending of this letter,  on September 9, accusing her of being a prostitute.

She was all set to come out in the open and face the media. But the comments from the MLA, which received wide media publicity, has thrown her totally off gear and sent her into depression due to which she could not bring herself to face the media.

The National Commission for Women was prompt in condemning the MLA for his misogynistic comments. Members of the victim's family have stated that they will take legal action against the MLA. A police complaint has already been filed against him for derogatory comments about a victim of sexual violence.

The bright spark in this humiliating tale is the protest organised by nuns who have come out in large numbers to show solidarity with the victim and are sitting in a dharna at the junction, within close proximity of the Kerala High Court in Kochi. The dharna started with about 100 nuns on September 9, but swelled to 200 the next day, with Bishops and priests from other Christian congregations coming out in support. On the fifth day, eyewitnesses stated that there were around 500 in Kochi while the protest also spread to other districts. Among those who joined in were retired High Court judge, Justice Kamal Pasha, retired district judges, Christian religious groups of various denomination and women's rights activists.

These comments from the MLA have come even after the Kerala High Court judgment dated August 13, in a writ petition filed by the Kerala Catholic Church Reformation Movement (KCRM) that the church authorities should refrain from making any derogative comments against the victim. But the MLA will claim that he is not a church authority and hence is not bound by this order and that he enjoys certain immunity as an MLA. But does the immunity granted to a legislator for comments made on the floor of the House extend to such remarks against a rape victim? It seems that four decades of the anti-rape movement across the country has not had any impact on our legislators.

A nun, who is a close associate of the victim, claimed that though there was clinching evidence of abuse, not just rape but also unnatural sex, the police was reluctant to take action due to pressure.

In the meantime, KCRM who had earlier filed a writ petition in July, has moved the High Court again, this time through a PIL, for victim protection, production of the case diary in court to assess the progress in the case and for court-monitored investigation. The PIL is before the Bench headed by the Chief Justice.

The court has asked the state why there have been no arrests so far. At this the public prosecutor sought time. Kochurani Abraham, a former nun, who has been spearheading the campaign, has said the protests on the street are acting as a pressure point.