In the recent General Election in Denmark, the Social Democrats won amid a wave of two very different issues — climate change and immigration. 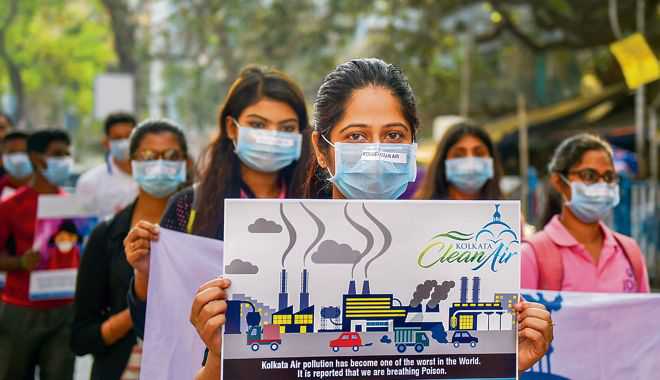 Worldwide phenomenon: Air pollution and climate change have risen to the top of the political agenda in most countries.

In the recent General Election in Denmark, the Social Democrats won amid a wave of two very different issues — climate change and immigration. Well, are the issues of environment and climate so serious, even politically, in today’s world? Apparently, yes. Polls show that 46 per cent of the Danish voters treated climate change as their top concern in 2019, while this percentage was only 27 in 2017. Younger people, in particular, are deeply concerned about the rising seas and global warming. And this has happened in a country which routinely belongs to the class of the world’s happiest, wealthiest and most egalitarian nations.

There is an increasing attempt to put the environment issue in the politicians’ court throughout the world. Is it the ‘Greta Thunberg effect’? This 16-year-old Swedish climate activist came into news last August, when she, then a ninth-standard student, staged a solitary and recurring protest called Skolstrejk för klimatet (school strike for the climate) outside Riksdag, the Swedish parliament. Or, is Thunberg herself a product of such growing consciousness over environment and climate across the globe?

The Thunberg effect has been tremendous these days. There is no doubt that air pollution and climate change have risen to the top of the political agenda worldwide. On May 1, MPs in the UK parliament endorsed a Labour motion to declare a formal climate and environment emergency. Labour leader Jeremy Corbyn hailed the move as a necessary response to school climate strikers and groups like Extinction Rebellion. In the preceding week, both Corbyn and UK Environment Secretary Michael Gove were among the MPs who met Thunberg at the British parliament. Corbyn went on to say that the decision by the Commons to pass the motion without a vote “can set off a wave of action from parliaments and governments around the globe”.

It’s another story across the Atlantic, and it’s more political. In 2016, Hillary Clinton and Donald Trump didn’t field a single question about climate change in their presidential debates. And, in June 2017, Trump announced that the US would cease all participation in the 2015 Paris Agreement on climate change mitigation — a decision which was criticised heavily by the world, including many in the US.

In contrast, climate is going to be one of the major issues in the 2020 US presidential election, for sure. Credit goes to the New York Congresswoman Socialist Democrat Alexandria Ocasio-Cortez, who, along with Massachusetts Senator Ed Markey, unveiled the idea of a package called ‘Green New Deal’, which has already affected the political landscape in a big way. More than 70 per cent of Americans now understand that climate change is taking place, according to data from the Yale Programme on Climate Change Communication.

A push for the congressional resolution has changed the conversation on climate change in Washington DC, where climate has long been relegated to third-tier status. Now, the lawmakers in the US can no longer avoid the issue. Nearly every Democratic candidate for the 2020 presidential nomination has endorsed the Green New Deal and candidates are painting themselves as climate warriors. And Republicans also can’t bypass the issue.

What's the position in India? India is home to the world's top 10 cities with the worst air quality, with Delhi being the world’s most polluted capital city. According to a recent report by the environmental organisation, the Centre for Science and Environment (CSE), life expectancy in India has gone down by 2.6 years due to deadly diseases caused by air pollution. A recent study by The Lancet found that 77 per cent of India’s 140 crore people were exposed to air far dirtier than the recommended limits. In 2018, the Central Pollution Control Board identified a total of 351 polluted river stretches. Of the 640 districts in the country, the groundwater in 276 is polluted due to fluoride, in 387 due to nitrate, in 113 due to heavy metals, and in 61 districts, it’s due to uranium. So, pollution and climate change should apparently be a major electoral issue in this country as well.

During the 2019 Lok Sabha elections, promises to combat air polluion featured in the manifestos of the major political parties, such as setting deadlines, introducing new emission standards, promoting electric vehicles. While the BJP promised to turn the National Clean Air Programme (NCAP) into a ‘mission’, the Congress promised to strengthen the NCAP to tackle pollution. Both the BJP and Congress promised to create a new ministry of water to address the water crisis. This is a remarkable change from the 2014 elections.

Politicians all over the globe have to act according to the mindset of their electorates. Unfortunately, however, environment is not yet a priority for a majority of the voters in this country. Public understanding of the long-term health consequences of poor air quality is low, and public discussions tend to focus on short-term personal protection, such as wearing face masks, rather than on long-term solutions such as a ban on burning trash. Greta Thunberg is still a girl from the wonderland to us. Also, although the media discussed and debated various issues like nationalism, unemployment, economy, demonetisation, political dynasty, there was insignificant discussion on the climate issue in the backdrop of the Lok Sabha elections.

Hope the people in our country will soon understand that air pollution and climate change are emergency issues. Otherwise, our grandchildren will be fighting on a dying planet. Cassandra, in Greek mythology, used to make prophecies. One of her remarkable prophecies was regarding the fall of Troy. Has Thunberg emerged as the modern-day Cassandra in the context of climate change? Remember that the 16-year-old wonder-girl has said, “We cannot solve an emergency without treating it like an emergency.”