AN exercise has been underway for over a year to make the Army a more efficient fighting force that can fight and win on tomorrow’s battlefields if deterrence fails. 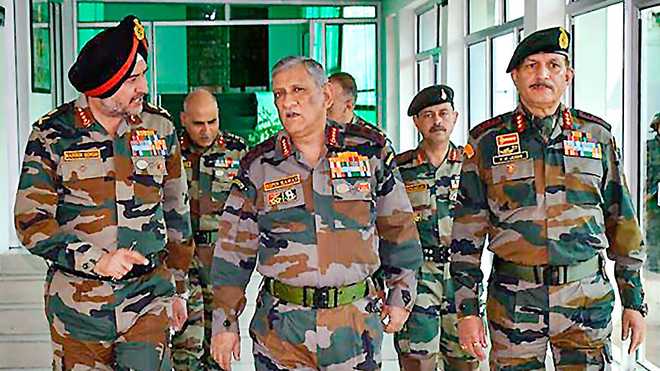 AN exercise has been underway for over a year to make the Army a more efficient fighting force that can fight and win on tomorrow’s battlefields if deterrence fails. It was reported in early September that the Army is in the process of raising 11 to 13 integrated battle groups (IBGs) for offensive operations across the western border.

The Army’s offensive operations doctrine for the plains, prior to Operation Parakram (2001-03), was to employ the massive combat power of its three strike corps to advance deep into Pakistani territory to capture strategic objectives, and to quickly bring to battle and destroy Pakistan’s Army Reserve (North) and Army Reserve (South), so as to substantially degrade its war machinery.

This concept was evolved in 1981-82 and tested in Exercise Digvijay when General KV Krishna Rao was the Army chief. It was further refined during

The Army’s new concept of offensive operations is a combination of ‘cold start’ — the ability to launch quick strikes across the International Border (IB) without prior warning by moving rapidly to battle positions from the cantonments — and the employment of ‘integrated battle groups’. IBGs are offensive forces usually formed at divisional level to penetrate across the IB over a wide front but not necessarily strike too deeply. The new doctrine is in marked contrast to the old concept of launching massive strike corps operations for deep hits across the IB since such operations may threaten Pakistan’s nuclear red-lines as its nuclear threshold is perceived by many analysts the world over to be low. Other analysts, including this writer, believe that Pakistan’s nuclear bluff can be called.

For this reason, the achievement of the military aim in the next war in the plains, while ensuring that operations do not escalate to nuclear exchanges, will pose a unique challenge.

The need to be able to mobilise quickly (cold start) and launch multi-pronged but ‘shallow’ offensive operations across the border into Pakistan, as well as the need to mass firepower rather than forces when planning to fight in a nuclear environment, prompted the need for some fresh thinking about force structures for offensive operations. Because of their massive size, the present strike corps are difficult to concentrate, side-step, deploy and manoeuvre. These limitations virtually rule out the achievement of surprise and deception. During Operation Parakram, the strike corps had taken too long to mobilise.

Inevitably, the question was asked: If the Indian strike corps are going to be employed only to achieve small, operational or even tactical-level gains, why have them at all? It was clear that in the coming decades, Indian military genius will lie in finding a suitable via media for launching meaningful offensive operations as well as maintaining strong countervailing forces.

If a fleeting opportunity is to be exploited, the strike formations must be capable of launching an offensive operation from a cold start. Within 72 to 96 hours of the issue of the order for full-scale mobilisation, three to five division-size “battle groups” must cross the IB straight from the line of march. They should be launching their break-in operations and crossing the “start line” even as the holding (defensive) divisions are completing their deployment on the forward obstacles. Only such simultaneity of operations will unhinge the enemy and paralyse him into making mistakes from which he will not be able to recover.

An option that the Army had reportedly considered was to split the three strike corps into several division-size, integrated ‘battle groups’ of the size and capability of Russia’s famed operational manoeuvre groups (OMGs), that were designed to be launched after a ‘break-in’ had been effected. While one ‘battle group’ each could be allotted to the ground-holding (pivot) corps for providing an offensive punch to them, the others will need to be so structured that they are capable of independent action as well as capable of being deployed concentrate. These would be designated as theatre and Army Headquarters reserves.

Each IBG will need to be specifically structured to achieve designated objectives in the terrain in which it is expected to be launched and yet be flexible enough for two or more of them to fight under a corps headquarter to bring to bear the combined weight of their combat power on a common military objective deep inside the enemy territory. Hence, the strike corps headquarter must be capable of taking under command IBGs at short notice to achieve the laid down military objectives.

The ‘pivot’ or ground-holding corps have been provided significant offensive capability now integral to them. According to a former COAS, “They have been assigned roles, which are offensive as well as defensive…The decision-making has been left to theatre commanders, depending on their assessment and evaluation of the situation.”

Several exercises designed to test the Army’s new concept for offensive operations in the plains were held following Operation Parakaram. These included Poorna Vijay (2001), Vijay Chakra, Divya Astra, Vajra Shakti (May 2005), Desert Strike (November 2005) and Sanghe Shakti (May 2006). All of these were aimed at concentrating and coordinating firepower and fine-tuning the Army-Air Force joint operations premised on operations in a nuclear environment.

Only innovative measures of this type will lead to success in short and sharp future Indo-Pak conflicts that may spill over to the plains. The art of generalship will lie in achieving military aims quickly without crossing Pakistan’s nuclear threshold, before the international community blows the whistle for a ceasefire.