AN effective criminal justice system is a cornerstone of a just, fair and safe society. 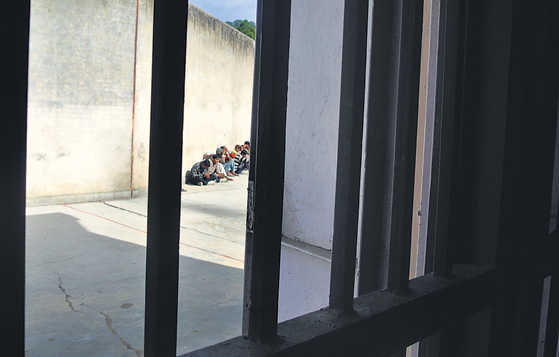 Research and experience show that prisons are damaging not only to the offenders but also to families and society. Focus should be on restorative, not retributive, justice. Photo by the writer

AN effective criminal justice system is a cornerstone of a just, fair and safe society. It has been remarked that: “If one really wants to know how justice is administered in a country, one does not question the policemen, lawyers, the judges, or the protected members of the middle class. One goes to the unprotected, those precisely who need the law's protection most! and listens to their testimony.” — James Baldwin. Listening to the testimonies of the unprotected, including  those in prison, makes one question the different  ways that justice system  operates and gets administered in our country.

Punishment for offenders, is  placed at the centre of the Criminal Justice System. However, a somewhat myopic focus on punishing offenders negates the   very needs of the   victims. The central questions   in the criminal justice system today are- what law has been broken, who broke the law and what does he or she deserve. Establishing guilt and proving it beyond reasonable doubt becomes central to the system, forgetting the victim in the process. Even though the Supreme Court says arrest only when necessary, the massive arrests continue unabated.  Nearly 80 lakh persons were arrested in 2013. i.e.  35,23,577 persons were arrested  under IPC crimes and 44,67,963 persons under Special and Local Laws like NDPS, Arms Act etc.  Too much focus is  on arrest, while scant attention is paid  on providing support to the victims of crime.

Further, imprisonment is used most not just for punishing offenders, but even for those awaiting trial. Prisons are full of undertrials. In 1391 prisons in India, with a  total population of 4,11,992 prison inmates,  2,78,503 prison inmates are undertrials and 1,29,608 are convicts. A just measure of pain may be desired, in order to to denounce the crime, but if it does not go beyond that, then we need to question the non-parsimonious  use of imprisonment. Around 67 per cent undertrials spend uncertain time in prison, and many may be acquitted after years. The process of delivery of justice becomes punishment in itself. There is no repairing and undoing  the loss of loss of liberty, honour and reputation. The wheels of justice grind too slowly. With zealous cops arresting, overburdened courts and overcrowded prisons, every player of the criminal-justice system seems to be playing a  role that does not lead to problem solution but  further escalates the problems. So it may not matter if a person is trapped in prison for more than year or two. Too many   inmates in prison may be in a state of enforced idleness, with little or no constructive activity. Is it any wonder then that there are conflicts inside the prisons? Neither the offenders, nor the victims, and  the community  are satisfied with the current state of affairs. But lynch mob justice is another extreme that spells disaster to the rule of law. While over 10 million people are imprisoned throughout the world, research and experience show that prisons are damaging not only to the offenders, but also to their families and to society. This perhaps, is the conundrum at the heart of retributivism.

Dealing with breaking the law

Different countries are now experimenting with other ways of dealing with those who break the law. Questions of who has been harmed, how much damage done and how it can be repaired are being   asked.

Crime is harmful to not just the victim and their families but also the offenders and their family and the community as well.  Offenders, therefore, must make things right with the community as well. Restorative justice is a  process that  brings victims and offenders together and enables them to talk to one another, it can enable them to see the other as a person, and not as a stereotype. If offenders listen to victims’ stories and face up to the reality of what they have done, it can be helpful for both.

One area where there is tragic loss of lives is due to rash and drunken driving that can leave the victims’ family shattered. The scales of justice get  tilted when we have a poor victim and a rich, powerful offender. A protracted trial is something that benefits the rich and powerful, but works against the poor. The blame worthiness also shifts to the victim.

What does a sentence of five years imprisonment mean for the victim’s family? A public expression of foolishness over drunken driving and appealing to public against drinking and driving would earn some sort of redemption for a celebrity like Salman Khan. Should not putting right the wrongs done become  a central  question? Since crime that is committed by one individual against other, that is a victim, hence it is important that offender should be held accountable for restoring as much as possible to the victim and their families. In 1982, a movement of “Mothers Against Drunk Driving”  emerged after the death of a teenager caused by a drunk driver. Today, it has spread in the USA and Canada. It introduced victim-impact panels as a restorative justice approach to victim involvement.

A victim-impact panel is a forum for victims of drunk driving incidents to share their experiences with convicted offenders under the order of a judge . Should we not consider having such an initiative here in our country? A meaningful  community sentence, is also needed, and not just be confined to the likes of Sanjeev Nanda in the BMW case. The disparate treatment of persons points to the inequities in the system. However, amendments are needed in the IPC to bring community sentence as one of the modes of punishment.

Active acknowledgment and acceptance of personal responsibility for the crime and its consequences, rather than a mere passive one imposed by others, needs to be encouraged. The over reliance on the efficacy of punishment to change the behaviour is   itself questionable. This is especially in the case of juvenile offenders. The retributive cry, and harsher penalties needs to be replaced by restorative justice. Crime can be resolved by focusing on redressing the harm done to the victims, and holding offenders accountable for their actions and, often also, engaging the community in the resolution of that conflict. Resolving and mitigating the negative consequences of the conflict is important if we want to build a safer society. There is a need to build a   bridge between the victims and the offenders.

Finally, prisons should be built upon second chances, not condemning but treating   persons as humans. They   should not be just warehouses with no social, moral and purposive input. They should  be   places which help offenders to   assume responsibility and experience a transformation and improve their relationship with the community. By positively working for   the community,    they will gain a stake in the community and get better reintegrated. The system needs to evolve to meet the needs of crime victims, offenders and the  community.

— The writer is Deputy Director, Institute of Correctional Administration, Chandigarh