In India, the people with disabilities are addressed by many denominations interchangeably. 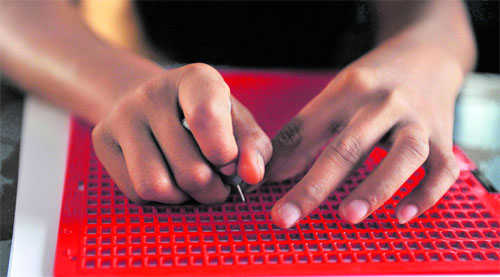 In India, the people with disabilities are addressed by many denominations interchangeably.  Since the mid-1980s, patronising terms such as “differently abled” and “specially abled” have been quite common in public parlance. Recently, Prime Minister Narendra Modi in his last Mann ki Baat, broadcast on December 27, 2015,  appealed to the public to adopt the use of the term “divyang” (divine body) to address  persons with disabilities. This well-intentioned  appeal by the Prime Minister, through the state-run All India Radio, to call people with disabilities as “divyang” (divine bodies) could do great damage to their dignity and identity.

People with disabilities have long been enduring  the pain of not being addressed as normal human beings as they think themselves to be. Moreover, the term “divyang” is antithetical to the definition of disability envisaged under the United Nations Convention on the Rights of Persons with Disabilities, to which India is a signatory.

The UNCRPD stipulates that disability occurs due to extraneous factors such as physical, psychological and environmental barriers. The Indian Government which ratified the treaty, is thus duty-bound not to contravene the provisions of the UN treaty in the domestic legislation and the public policy on disability. Persons with disabilities have long been demanding from the State that they should neither be pilloried as evil mortals nor be deified. They are as human, with distinct physiological and psychological attributes, as other non-disabled individuals in  society.

However, too much obsession with the notion of “abelism” in the public sphere has dashed the dream of the people with disabilities from becoming equal citizens on a par with others. They are often pitied and treated with charity. They are not respected as people having Constitutional rights. The woes of the People with Disabilities related to accessibility, education and employment are paid tangential attention. The Central Government allocates meagre budgetary support for their empowerment.  For instance, in the last Budget of 2014-15, presented by the Finance Minister Arun Jaitely, it was paltry Rs 5,000 crore. Moreover, the state governments' indifference towards people with disabilities is more shocking.

Despite disability being one of the subjects in the state list under the Seventh Schedule of the Constitution, several states are yet to formulate a comprehensive policy on disability issues. The demand for bringing  disability in the concurrent list is yet to be met. As a result, the large number of people with disabilities residing in the rural areas are compelled to live in inescapable penury. However, the governments at the Centre and in the states remain negligent about their pressing needs.The daily ordeal of the persons with disabilities at the grassroot reveal their vulnerabilities which requires an urgent attention from the government.

Therefore, amidst harsh poverty faced by the disabled,  extolling them as “divyang” is not less than a covert ploy to shield their resilient character and struggle as human beings.

Undoubtedly,  people with disabilities face daunting hurdles and create innovative ways to overcome them. However, their struggle to deal with the obstacles should not be glorified. People with disabilities should not be construed as passive subjects. They are  agents of their own destiny. It is thus imperative for the Government to take them on board before formalising any new terminology in the disability legislation.

The Department of Empowerment of Persons with Disabilities (DEPWD) should seek responses from the disability sector on the term “divyang” suggested by the Prime Minister. The view of the Prime Minister reflects the mindset of a large section in the Indian society who are judgmental about the capabilities  of the people with disabilities. Instances abound, such preconceived  notions held by the political class and the Indian bureaucracy have dealt irreparable damage to the disabled people. Like any other non-disabled person, disabled people want to earn respect by their deeds and live with dignity.

Therefore, instead of patronising and glorifying them, the government at the Centre and in the states need to create a conducive climate in which they get a level playing field, at par with others. Until the government does not undertake serious efforts to do away with the stigma attached with disability, the hardships of the disabled would continue to be accentuated. Merely a change in the nomenclature for addressing the disabled people is inadequate.

A much deeper engagement with the plight of the disabled people is needed to bring about substantive transformation in their lives. A large number of disabled people are striving for the bare minimum, and they are still “divyang” for the Prime Minister. It's a cruel joke with their lives. “What's in a name”, they wonder.

The writer is a doctoral candidate at the Centre for the Study of Law and Governance, JNU