Development yet to embrace rural India : The Tribune India

Development yet to embrace rural India

THE Socio-Economic and Caste Census (SECC) 2011 for rural India belies the claims of India''s high growth and its underlying philosophy that the benefits of high growth automatically percolate down. The data also casts aspersions on claims that rural poverty has declined over time. 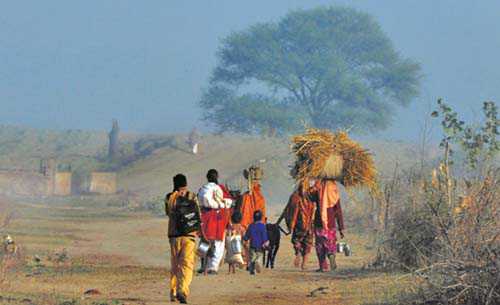 Life in rural areas has not really gotten any better.

THE Socio-Economic and Caste Census (SECC) 2011 for rural India belies the claims of India's high growth and its underlying philosophy that the benefits of high growth automatically percolate down. The data also casts aspersions on claims that rural poverty has declined over time. The grim reality painted by the SECC 2011 makes a clear disconnect between high growth and its benefits reaching rural India. In spite of emphasis on inclusive development, the exclusion has been the norm for a majority of rural society.

One-fourth of the households are phoneless. The knowledge base of the rural society is abysmally low. Around 24 per cent households do not have a literate adult above the age of 25. The overall rural illiteracy rate is 36 per cent, which follows a skewed distribution across gender and caste. Only 3.45 per cent rural households have graduate degree holders. Another revelation is that 60 per cent households are deprived households, out of which 21.5 per cent belong to the SC/ST category. The deprivation index is computed on the basis of seven indicators comprising households with only one room, kutcha walls and kutcha roof; no adult member between the age of 16 and 59; female headed households with no adult male member aged between 16 and 59; households with disabled member and no able-bodied adult member; SC/ST households; households with no literate adult aged above 25; and landless households deriving a major part of their income from manual casual labour.

The gulf between rural and urban India widened during the post-economic liberalisation period. The epicenters of the liberalisation are industry, trade and investment. The agricultural sector has not only been bypassed by liberalisation, but also has become the victim due to a decline in public investment in agriculture, terms of trade turning against agriculture, rationalisation and partial withdrawal of subsidies to the sector.

However, the rural-urban divide is not unique to India. The annals of economic history of the developed world, particularly Japan during Meiji Restoration (1868-1912), clearly reveal that for industrialisation, agriculture has paid a heavy cost in the form of taxes. Michael Lipton, a distinguished economist and author of Why Poor Stay Poor: A Story of Urban Bias in Development (1977), has propounded the Urban Bias Thesis (UBT). Lipton argues that urban bias “involves (a) an allocation to persons or organisations located in towns, of shares of resources so large as to be inefficient and inequitable, or (b) a disposition among powerful (urban classes) to allocate resources in this way”. Price distortion is at the centre of Lipton’s thesis stating agricultural goods are underpriced whereas industrial goods are overpriced and thus the rural sector finances the development of industrialisation and urbanisation. A lively debate on UBT is continuing. Lipton and Robert Eastwood argue that UBT exists in post-liberalism period as better educated and better placed urban people have exploited most of the economic opportunities in the wake of liberalisation.

The opponents of UBT opine that mega projects, like international airports, can only be located in cities. The benefits of cities and mega industrial clusters do not confine only to urban areas. These benefits also trickle down to their rural hinterlands. They also argue that parallel to rural poverty and backwardness, urban poverty and slums are also a reality. Notwithstanding the criticism of UBT, it has made inroads into the arena of public policies, including at the World Bank level.

The impact of price distortions and economic liberalism is partly offset by the rural development policies. In India, the central and state governments have implemented more than 100 programmes for rural development. Unfortunately, the benefits of these schemes could not fully reach the target population mainly due to (i) wrong identification of the beneficiaries; (ii) corrupt practices associated with financial transactions; (iii) diversion of funds by the poor; (iv) non contribution of state share to funds; and (v) lack of political and administrative accountability. These policies, barring the Green Revolution, have also not widened the productive base of the rural economy, and as a consequence, the rural-urban divide has increased.

Thanks to SECC, the writing on the wall is clear. The census has built a strong case for introspection of policies from the rural perspective. For delivering their due to the rural people, a paradigm shift in economic policy-making and budget allocation is needed.

The Central government has replaced the Planning Commission by the NITI Aayog. The state governments should also constitute state NITI Aayogs, electing heads of the local governments on it. This decentralised process of policy-making would incorporate the priorities of people at the grass-roots level and enable fruits of policies reaching the target population. Economist Wallace Oats has built a case for decentralisation by developing a ‘Decentralisation Theorem’ that states, “for a public good — the consumption of which is defined over geographical subsets of the total population, and for which the costs of providing each level of output of the good in each jurisdiction are the same for the central or for the respective local government — it will always be more efficient (or at least as efficient) for local government to provide the pareto-efficient level of output for their respective jurisdictions than for the central government to provide any specified and uniform level of output across all jurisdictions”.

Along with the decentralised policy-making process, the governments should also make liberal investment in rural education, health and infrastructure. Only this shift in budgetary allocations can help the rural sector to reap benefits of the flagship programmes, including Make in India, Skill India, Digital India, Swachh Bharat and Smart Cities. The diversification of the rural economy by promoting non-farm activities, specially rural industries, can also help in generating gainful employment for rural youth. Lipton opines that a given amount of public investment in a small agricultural sector or rural off-farm activities will yield higher returns vis-à-vis same investment in cities or large urban-based industries. Thus the existing big industry model be supplemented by the industry dispersal model, incentivising small and medium enterprises to shift to rural areas. Generation of rural employment and income at this juncture would be a boon to the Indian economy in the form of expanding market. Plugging leakages, promoting transparency and accountability in rural development programmes by making social audit an integral part can improve the outcomes of the programmes.

The writer is a Professor in the Department of Public Administration, Panjab University