The unprecedented petition to the President by 150 retired armed forces officers, including half a dozen former Chiefs of their respective services, to complain about the politicisation of the armed forces in the context of the Lok Sabha elections, is cause for dismay, if not alarm. 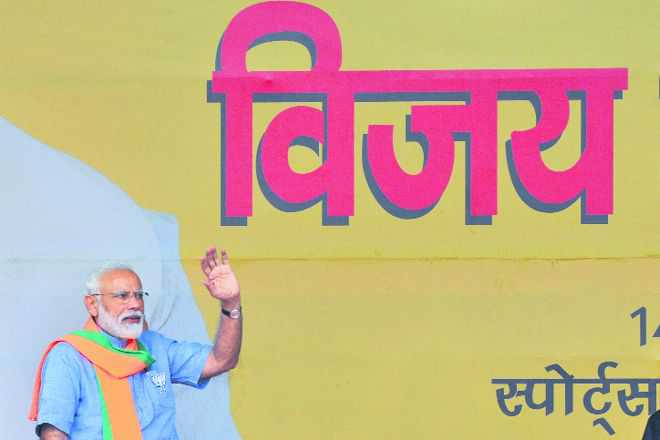 Limits off: This election has seen the usual divisive process take on an ugly edge.

The unprecedented petition to the President by 150 retired armed forces officers, including half a dozen former Chiefs of their respective services, to complain about the politicisation of the armed forces in the context of the Lok Sabha elections, is cause for dismay, if not alarm.

There is nothing inherently wrong in the government of the day taking credit for a military action during its watch. But there is a problem when that government uses that action to not just burnish its own nationalist credentials, but to vilify the Opposition and divide the nation.

Asking first-time voters, as PM Modi did, to dedicate their votes to soldiers who died in Pulwama and those who conducted the Balakot airstrike is a blatant attempt to link a set of military measures to the electoral future of a political party. Yogi Adityanath, terming the military as a personal force of the PM, has crossed multiple red lines of our constitutional and civil system. Recall, that the BJP used the surgical strikes of 2016 to channel votes in the UP Assembly elections.

It is a well-known fact that in democracies, elections divide. Opposing camps pitch their ideas, policies and projects before the electorate.  Promises are made, charges hurled, motives questioned, yet when the election is over, everyone more or less reconciles with the result. But in this process, there are some no-go areas—the armed forces, the police, judiciary and the bureaucracy. But this General Election has seen the usual divisive process take on an ugly edge that hits at the stability and integrity of the country and the neutrality of its armed forces.

This year, for example, the Indian Air Force wanted Rs 75,000 crore for capital acquisitions, but was given Rs 39,347 crore, which is not even sufficient to take care of past commitments that amount to Rs 47,413 crore. This is no aberration; last year, too, all three wings of the military were similarly short-changed.

Whatever be the truth about the F-16 shootdown, the lack of adequate equipment seriously hampered our Air Force in the air encounter of February 27. For one, Indian aircraft were clearly out-gunned. Second, Wing Commander Abhinandan Varthaman’s aircraft lacked a crucial data link through which he could have been alerted to return instead of flying into a Pakistani missile. As for Pulwama, the government has yet to provide a convincing answer as to why its intelligence services failed to prevent the strike.

For all his fulminations, Modi has not been particularly attentive to the needs of the armed forces. An example of this is his irregular attendance at the annual Army, Navy and Air Force days. Once a hallowed annual occasion where the PM and his senior ministers mingled with the military brass, ex-servicemen, awardees and guests, they have now become routine events.

The BJP’s scorched earth campaign will make post-poll reconciliation difficult. Excoriating adversaries is par for the course in electioneering, but declaring that they are agents of Pakistan, or traitors, creates a divide that cannot be easily bridged. The slogan ‘Congress-mukt Bharat’ indicates that, perhaps, it is not meant to be. In the same way, accusing the two principal political parties in J&K of  promoting a separatist agenda is not just irresponsible, but self-destructive. The Union Home Minister’s election commitment to further strengthen the colonial-era law on sedition only reveals the mindset of the ruling party—every opponent is not just an opponent, but a traitor to the nation.

But, perhaps, the most serious issue of divisiveness relates to the Indian Muslims. Keeping them out of its own electoral calculations is the BJP’s own choice. But the Sangh Parivar tactics of assault and intimidation that have unnerved the Muslims in northern India has opened dangerous social fissures. The strident calls for a National Citizenship Register that will ensure citizenship for the Hindus, Buddhists and Sikhs is simply a code for disfranchising the Muslims. Deliberately pushing what could, in another 30 years, be 20 per cent of your population to the brink, can only be termed rank folly.

Democracy is not just about rules and regulations, it is also about convention and common-sense. It is about negotiation, compromise and accommodation. In the same way, secularism is not a gift that India’s majority community has conferred on its minorities. It is a pragmatic move that enabled the Republic of India to stand up in the wake of the terrible Partition of 1947. A Hindu hegemony in our body politic will not yield the Akhand Bharat the BJP wants, but a diminished Republic considering that J&K, Arunachal Pradesh, Punjab, Mizoram, Meghalaya and Nagaland are minority-dominated states.

Perhaps this is what the Sangh Parivar wants—to undo the Republic that has endured for 70 years. Or, maybe, all this is merely born of the desperation of the present Modi-Shah leadership to stay in power. Winning the election is all that matters, everything else is expendable — the stability and integrity of the country, the political neutrality of its armed forces, and, indeed, its democratic polity.