Economic reforms: Looking back & ahead

Unfortunately, the debate on the Land Bill got embroiled in controversy and seems to pitch industrial growth against agricultural growth. The progress of agriculture and industry can be complementary to each other. 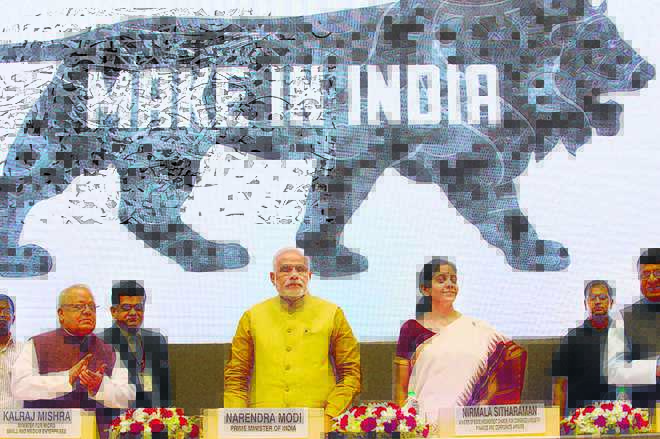 The first year of the Prime Minister at the helm of policy making in India has truly been momentous. The country has witnessed a number of initiatives on the economic front since he assumed the august office after more than a decade of experience as a chief minister of a fast-developing Gujarat. The reforms, under the PM's stewardship, spanned different aspects of the economy — industry mainly micro, small and medium enterprises; monetary and fiscal policy, social security; skill development; and employment generation.

On the economic policy, an important and historic measure was implementation of Jan Dhan Yojana for extending bank accounts to unbanked. In less than a span of six months, more than 12.5 crore accounts were opened, which are nearly one-seventh of the existing number of accounts in the banking system.

The coverage of households with bank accounts has increased to nearly 98 per cent and of these nearly 50 per cent of the accounts are actively operational.Public sector banks have played a significant role in the success of the Jan Dhan Yojana and to further facilitate banking usage are installing additional 20,000 ATMs. The bank account opening drive, supervised by the PM, established his commitment in obtaining results, when he personally wrote to the banks to ensure success. This is historic because since 1955, after the nationalisation of State Bank of India, political rhetoric emphasised financial inclusion but without achieving results.

The vision of the new government, enunciated in the Budget in February 2015, in sharp contrast to the traditional Garibi Hatao is to provide a house for each family in India, implying completion of 2 crore houses in urban and 4 crore houses in rural areas by 2022. The first full year Budget covered issues like social security, employment opportunities for the young demographic nation, black money, provisioning of 100 smart cities, and roadmap for goods and services tax. To encourage youth to create jobs, government conceived establishing a techno-financial incubation and facilitation programme to support start-up business.

Focus on make in India

To encourage Make in India, Micro Units Development Refinance Agency (MUDRA) Bank was inaugurated, with the objective of providing funding to the unfunded as of nearly 6 crore enterprises, only 4 per cent get institutional financial support in the country. MUDRA Bank with the corpus of Rs.20,000 crore will refinance and assist those financial institutions that finance micro units in India.The business cover under MUDRA Bank includes small manufacturing units, repair shops and artisans with financing requirements of up to Rs 10 lakh.

The government also proposed monetising gold stocks through various schemes, including minting of coins. The minting of gold coins in India, would lead to higher employment and retention of related profits within the country. In view of the fact that about 30 per cent of gold held by the public is for investment purposes, this at least is expected to be monetised easily. The government is making efforts to encourage recycling of gold within the country and reducing the pressure on imports that finally impacts the current account deficit.

In the context of social security, the PM announced three schemes with the flagship Atal Pension Yojana (APY) aiming to provide old age income security to the working poor in the unorganised sector. The Jeevan Jyothi insurance scheme provides a one year cover, renewable annually, offering life insurance for death. The third scheme, Suraksha insurance scheme, renewable annually, provides insurance to cover death or disability on account of an accident. These three schemes will ensure financial inclusion, enhanced business opportunity for banks and higher insurance penetration, thus providing economic security to people in the unorganised sector. Economic security will also ensure stability in consumption pattern and ability to weather income shocks, implying a steadier path of growth for the economy.

The PM, during the year, clearly followed a policy to strengthen and empower states. The Planning Commission was declared “dead” on August 15, 2014 and the birth of a new body called National Institution for Transforming India (NITI) was announced. In setting up NITI Aayog, the government aims to reap the benefits of creative energy across the country that emerges from states, regions and local bodies. The effort is to build a development model that is more consensual and cooperative and strengthens the resolution of the 73rd and 74th Constitutional amendments of 1992. Second, in generally accepting the recommendations of the Fourteenth Finance Commission (FFC), the government clearly followed the policy to strengthen and empower states. The key policy assumption of FFC was that all governments in the country, be it the Union, state or local, have the wisdom to spend optimally. This is an important principle of “equality” amongst fiscal peers that needs to be upheld in all inter-government deliberations. The above principle implies that each tier of the government should be considered equally accountable and responsible not only by the public but also by the Union Government. Another important and clearly delineated philosophy of the FFC has been that transfer of fiscal resources to the states from the Union should be on trust rather than on conditions.

The government is successfully pursuing the implementation of goods and services tax, aiming at a uniform rate across the country and thereby integrating the national market. The success of GST would be a landmark decision in the history of taxation and political economy of India.

The Prime Minister has also been extensively interacting with leaders from various important countries to enhance trade, business, and opportunities for growth and employment in India. The increased economic and regional cooperation that has been noted in the last one year is expected to yield results in the future. The government has also been successful in engaging Russia, USA, China and Japan along with other advanced countries like Germany and France as well as immediate neighbours to help maintain the power balance in the region. This balanced strategy will also benefit the Make-in-India approach, providing an impetus to employment, and growth.

The Make-in-India strategy, with focus on micro and small industries will help in the process of urbanisation and generating employment for the young dynamic population. Increase in industrial output would also ensure higher volume of high quality of exports yielding higher foreign exchange earnings.

Unfortunately, the political debate on Land Bill got embroiled in controversy and seems to pitch industrial growth against agriculture growth. In fact, progress of agriculture and industry can be complementary to each other. The agriculture sector provides manpower, food and raw materials to industry, while industry reciprocates with employment opportunities and manufactured goods which get absorbed in the rural areas. The higher purchasing power with higher income growth in both rural and urban areas enhances economic welfare in society and is mutually beneficial. Illustratively, higher growth in the industrial sector has resulted in the price of foodgrains and agriculture products rising faster than industrial output over the last few years, providing larger benefits to the farmers. The most important development in the last year is the reversal in the investment climate and expectations in the capability of the economy. The industry which had been suffering from policy paralysis suddenly found hope in the new political regime. The hopeful mood helped in generating a positive impulse conducive for growth. The year goneby has been packed by economic events but the general approach towards economic reforms has been reconciliatory and continuity in policy which has inspired confidence in the international community. However, the government, given its strong mandate could have done significantly more on some select challenging issues. One such menace is corruption, impacting India's global image and ease of doing business, as at grass-root level it is still rampant. In literature of political economy, the most significant justification and cause of corruption is election funding. The other challenge is crime against women which has economic implications in terms of female workforce participation and tourism. The third is farmer suicides due to financial distress on account of crop failures. The government could consider establishing stringent zero-tolerance standards in all these cases.

The success of the 1991 reforms was partly attributed to careful crafting, cautious implementation, and appropriate sequencing of measures. In addition, and more importantly, there was widespread consultations and building of consensus not only amongst policy makers but also the general public. This role was ably undertaken by eminent economists, occupying different advisory positions, through wider consultations and deliberations and by organising and participating in seminars, workshops and conferences.

Further, as the government constituted the expenditure management commission to review the major areas of central government expenditure, there is also need to examine other economic issues like monetary policy framework, governance issues in banks, and trade and gold policy. A team of professional economists would not only help in completing these tasks but in the process get groomed to shoulder international assignments when global opportunities arise.

Did all this hope and conducive environment, that marked Modi’s focus on altering the investment climate translate into growth? Yes and no. Yes, while the global growth is wobbling, India's robust growth outlook is positive and upward looking. No, because results are not commensurate with heightened hope and expectations. However, it is important to understand that transmission of hope takes time to transform into output, as all outputs have gestation lags, especially after such a long spell of policy inertia. Also, there could be an emerging a gap between policy announcement and implementation which is probably evident in the slower industrial production. In fact, the ecosystem to generate growth needs to be revisited to revive industrial production. Similarly, recent banking results, including non-performing assets, are not encouraging.

The writer is RBI Chair, Professor of Economics,