THIS September, the contemporary philosopher and empathy expert Roman Krznaric will open the Empathy Museum, the world''s first museum dedicated to helping visitors develop the skill of putting themselves in others'' shoes. 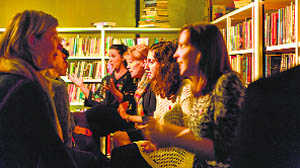 The Human Library in the Empathy Museum

THIS September, the contemporary philosopher and empathy expert Roman Krznaric will open the Empathy Museum, the world's first museum dedicated to helping visitors develop the skill of putting themselves in others' shoes. Empathy, the ability to understand others, has been sidelined in the past decades, while we have focused on a hyper-individualistic, consumerist race to serve ourselves whatever the cost to others. So Krznaric, along with a whole school of social and cultural thinkers, believes that we should deploy empathy to sort out the mess we're in.

Krznaric has lost faith in the old model of changing society through parties and politics and laws. “Empathy has this amazing power for social change,” he explains. "We need to take empathy out of the realm of psychology and not only into everyday relations but also into culture.” Empathy it is also touted as the next big thing for career and relationship success.

“Could a greater miracle take place than for us to look through each other's eyes for an instant?” asked Henry David Thoreau, the 19th-century American philosopher and abolitionist. Krznaric chose this quote as the epitaph to his book, Empathy: Why It Matters, and How to Get It. In September, when the Empathy Museum opens, he will ask visitors to think along the same lines as Thoreau: the first exhibit will be called A Mile In My Shoes.

From the Depeche Mode song “Walking In My Shoes” to the novel To Kill A Mockingbird (“You never really understand a person until you consider things from his point of view — until you climb into his skin and walk around in it,” Atticus Finch tells his daughter, Scout), the concept of trying someone else's life on for size is a metaphor for empathy. At the Museum, visitors will find themselves in a shoe shop where a sales assistant fits them, literally, with someone else's shoes — shoes that may belong to a refugee or an old Etonian banker. The point is to create an explosion of empathy in everyday life. “We're creating an experiential and conversational space, not a staid Victorian museum,” says Krznaric. Over 10 years, the travelling exhibit aims to visit around 50 locations, innovating with new experiences as it goes. After the debut at London's Totally Thames festival, the plan is to travel around the country, before heading to Perth, Australia, in 2016. The museum is already online, with the Empathy Library, that reviews hundreds of books and films dealing with the subject of walking in someone else's shoes.

Another central tenet of empathy is “outrospection”, the opposite of focusing principally on the self to the exclusion of all else. Aren't we just wired that way? Krznaric answers: “The idea that we're basically self-interested is an astounding piece of propaganda that's been around for 300 years.” He blames the self-help industry, consumerism, Reagonomics… “None of this has delivered the goods.”

Empathy cannot be effective if it remains stuck in academia. So how does it work out on the streets? Krznaric reels off real-world examples where empathy has made a difference. Parents’ Circle is a group of bereaved Israeli and Palestinian families who have found understanding through communication: over one million people have now taken the opportunity to speak openly with their perceived enemies. The point is to create an explosion of empathy in everyday life. Over 10 years, the international travelling exhibit aims to visit around 50 locations, innovating with new experiences as it goes.

Roots of Empathy is an education project with pilot schemes in some London and Scottish schools. “The school ‘adopts’ a baby for a year,” explains Krznaric. “They spend time thinking about the baby — why she's crying and what she might be feeling — and use that as a jumping off point into what it's like to be another kid in the playground. It increases co-operation, reduces bullying and improves general academic attainment.” You might think that, given the number of human connections you make each day, you have bags of empathy? But typically we connect with people who are like us, online and off, which means that even with the billions of people on the Internet each day, empathy is not spreading effectively. Empathy has its critics, but Krznaric thinks he's talked most of them round. If you're still not sure, take a look at the anti-slavery movement in the UK. The campaign was run along empathetic lines — former slaves gave talks to the general public. The tide didn't turn overnight; first came petitions, protests and boycotts. But eventually, abolition was achieved, and today the legality of slavery is unthinkable. Unless, perhaps, you take a walk in the shoes of an 18th-century plantation owner.