Fervent prayers for the coming year

MY childhood followed a pretty familiar pattern — an Anglican baptism, weekly Sunday school until a confirmation at 14 and a Church of England secondary education. 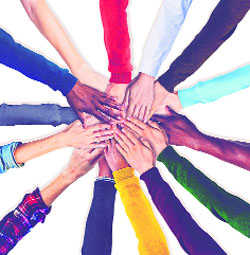 MY childhood followed a pretty familiar pattern — an Anglican baptism, weekly Sunday school until a confirmation at 14 and a Church of England secondary education. For years, I pretended those years of Bible study and church attendance hadn’t had much effect on my DNA — especially as I kept getting married and divorced — but these days I’m comfortable being described as a Christian, albeit one that finds the Church of England anodyne and its leaders irrelevant. These days, admitting you pray regularly in some social circles is like coming clean about having herpes. Belief is something that most Christians (unlike Muslims who are proud of their faith) keep quiet about, even though, when asked, the majority of the population confirm they believe in God.

Last month, the Equality and Human Rights Commission said that bosses should not stop workers celebrating Christmas for fear of “offending” other religions and the Prime Minister ( a vicar’s daughter) agreed, even though employers laughed off the notion as political correctness gone mad. Even so, a growing number of Christmas cards now say “Happy Holidays”, as if we aren’t celebrating the birth of Christ just a couple of days off work in front of the television. A large number of those who opted for Brexit (and many of Trump’s supporters) are old-fashioned Christians who don’t really talk about their faith — just as they refused to blab about their voting intentions. Christianity is still important in the lives of so many quiet people, even though you will not find fashionable media acknowledging that — it’s easier to talk about Islam being the fastest-growing religion on the planet and to demonise controversial groups like evangelical Christians as gay-hating reactionaries. In the spirit of Christmas, can I offer a non-denominational prayer or two? Firstly, can we work harder at talking to those we disagree with instead of hurling vitriol and abuse? The Trump campaign exemplified this new hatred, from placards to provocative soundbites which talked about “dealing with” immigrants and Muslims. During the presidential campaign, something revolting was unleashed in the name of patriotism that requires close inspection — rabid intolerance. In the past year, every time I’ve written something you might disagree with — whether it’s supporting council houses for large families, the expensive folly of cycle lanes, or the war between Black taxis and Uber, I’ve been targeted with screaming tweets and personal abuse by the bucketload from Katie Hopkins clones. Social media makes some people use the equivalent of block capitals every time they want to make a point. And then it gets repeated day after day and sent to everyone they know. Whatever happened to conversation, or agreeing to disagree?

My prayer is that we learn to speak in a whisper, a hushed tone, not a shout. And if we’re wrong, we should not apologise (like “patriotic” columnist Katie Hopkins did, for libelling an innocent Muslim family) at 2am on Twitter, but out in the open for all to see. My second prayer is that we stop focusing on addicts — be it those in the grip of drink, drugs or over-eating — and take a look at ourselves before casting the first stone. How many of us are addicted to shopping and unnecessary consumption — is it any different? Earlier this year, a senior executive at Ikea said he reckoned we’d reached “peak stuff”. At this time of year, clueless consumerism is rampant — the Christmas presents bought out of duty rather than knowing the recipient actually needs them. Christmas is a time for permitted over-indulgence on a huge scale — food, drink, snacks, wrapping paper and decorations.

I admit it’s hard to curb — we have ended up celebrating the birth of a baby born in poverty by buying a 20-pound turkey, a ham, a load of sausages, mince pies and a pudding washed down with a bucket of booze. Don’t call me Scrooge, but next year I plan to scale it down— maybe 2017 will be the time to devise a ten step plan to grapple with my addiction — spending money on extraneous stuff. Let’s not forget, that this kind of spending is a first world problem. A lot of what we buy has been made by people who earn in a month what we splash out on a single festive meal. Is it time to redress the balance slightly?