Free software gets a $5-billion fine : The Tribune India

Free software gets a $5-billion fine

More than 77 per cent of world''s smartphones run on various versions of the Android operating system, and this alone has made the company that owns and develops the software a target of the European Commission. 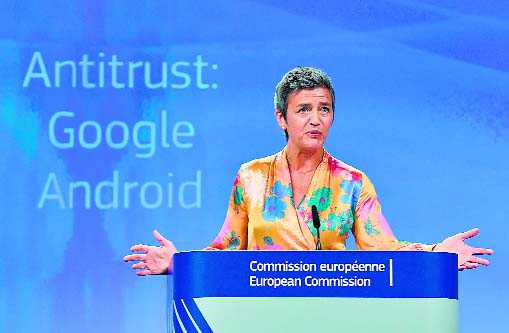 More than 77 per cent of world's smartphones run on various versions of the Android operating system, and this alone has made the company that owns and develops the software a target of the European Commission. After an investigation, Europe's antitrust regulator has ordered a record $5 billion fine and given Google 90 days to make the required changes.

It was another blow to the free-loading Silicon Valley ethos. The regulators are reining in tech behemoths. European Commissioner for Competition Margrethe Vestager has emerged as the most powerful regulator in the world, a person whose decisions are feared by international conglomerates even as they are studied and emulated by governments worldwide, including in India.

Even as the US adopted a laissez-faire attitude towards technology companies, Europe has taken control, and the moral high ground, by reining in companies like Apple, Microsoft and Google and treating them as it would any other business. "The principle in Europe is that companies must compete on the merits. Any company is welcome to do business in our Single Market. But it needs to play by the antitrust rules. And these rules are in place for the specific reason to protect consumers and foster competition," Vestager said at a recent press conference.

Why should a company that gives free software be fined? One reason is that while Android is a free and open-source operating system, Google licences its Google Play app store and imposes certain conditions, like  that Chrome and Google Search be preinstalled in every phone, which the EU regulators found were stifling competition.

Even as US President Donald Trump has announced his support for Google, the company's growing clout has worried regulators worldwide. At various times, it has been fined by the US Federal Trade Commission and other agencies, Spain, Russia and even the Competition Commission of India, which fined it $ 21.17 million for "search bias" in April, this year.

Google owns Android. Like many Silicon Valley start-ups, Android came up in Palo Alto, California, in October, 2003. The founders wanted to make it an operating system for digital cameras, but when they found that the market would not be as large, they switched to mobile phones. At the time Symbian OS ruled the roost (it was used by Nokia, Motorola, Samsung, Erikson, Sony etc), with Microsoft Windows Mobile, BlackBerry OS and Palm OS as other contenders.

As often happens, the Android founders soon ran out of money. Help was forthcoming, but eventually, the company was sold to Google in 2005. Android is based on the popular open-source operating system, Linux, and it has become the most extensively used OS in the world because it is given free, and is a robust environment for the palmtop computers that all smartphones have become today. Symbian lasted till 2010, as did Microsoft Windows Mobile. Android, which received a lukewarm welcome when it was launched in 2007, gathered steam and soon became a formidable presence. There is little doubt that Google provides a robust ecosystem, which it owns, along with the free programme, and this combination has become alluring for users.

Indeed, the tie-in between various apps or programmes is the holy grail of every tech company. Microsoft did the same for its computer operating system and Internet Explorer (IE). In 1998, Microsoft Windows was used in 95 per cent of Intel-powered personal computers, and it bundled the free IE with Windows. It got a bruising in its battle with the US Department of Justice, and later with the European Commission which fined it €£0.5 million in 2004 and forced it to delink Windows and IE, which had encroached heavily into the share of the then dominant Netscape browser. Eventually, Chrome would take over everything.

The increasing dominance of tech companies pits them against antitrust regulators at some point or the other. This is only natural, but regulators face a tough task, given the immense clout of these modern behemoths and their transcontinental reach.

Regulators have found it difficult to pin down large corporations that operate in countries where they may have minimal or no physical assets. In any case, such is the speed of change in technology that by the time hearings are over, the situation on the ground is often different from what it was when the process started.

Even as the EU faces criticism of doing too little, too late, it must be commended for taking on the Silicon Valley giant. Indeed, its rulings have become templates for other regulators also, especially in the area of data security and privacy.

Data has emerged as a primary currency in the digital world and EU has shown itself as a champion of data protection and has introduced laws to stop the potential abuse of data and algorithms. Indeed, the pushback has started, and it has already triggered a far more proactive approach from various companies than had been seen earlier.

India has the most substantial number of users for Google and Microsoft products, as also various social media platforms. Our regulators have the clout to ensure better service to Indian consumers, but they have not been as aggressive as, say, the EU in holding hearings and fining companies that violate consumer protection laws.

On the other hand, the Telecom Commission and the Telecom Regulatory Authority of India are to be commended for taking an unequivocal stand on Net neutrality and giving the country one of the most robust Net neutrality regulations.

The challenges in regulating the ethereal activities of transnational entities are many, but as the EU has shown, clarity of vision and a proper framework of rules and regulation ensure that they are not insurmountable. More than the money is the message - someone entrusted to ensure consumers' protection and interest is watching even those who have made fortunes by keeping tabs on the activities of billions of users.