By this time, one has probably heard everything there is to hear about the FTII fracas. 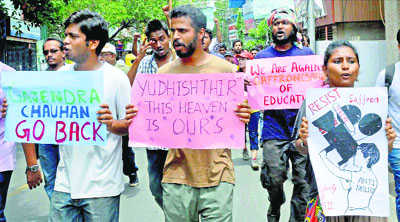 The students of FTII are not striking for any tangible benefits for themselves. PTI

By this time, one has probably heard everything there is to hear about the FTII fracas. The students of India's premier film school are protesting against the appointments of Gajendra Chauhan, a television actor and BJP member with no major cinematic credentials, as Chairman of the FTII Society as well some other members, who have even lesser qualifications. The students believe that the BJP government's real agenda is to make saffronisation and the Hindutva ideology all pervasive.

The thrust of the government and BJP's argument, on the other hand, is that the FTII has for long been a den of pampered liberals, seculars and Leftists and that much is wrong with the institute's functioning, which needs to be rectified. It has shown no signs of backing down from the questionable appointments and has also threatened the students with rustication.

The strike has been on for over a month now and a new director has just taken charge at the institute. Protests, petitions, support from the film fraternity and even the faculty have only grown stronger. One cannot help wondering how exactly the impasse will be finally resolved without either the government losing face or the students suffering harsh action.

Consider the situation since the 2014 General Election. The Modi government has more or less had a free run, courtesy an army of gloating bhakts, demoralised opposition ranks, an uncritically fawning media (till Lalitgate and Vyapam) and of course indulgent, middle-class supporters ready to give brand 'Modi' a chance to usher in achche din.

Yes, there have been signs of serious opposition like the farmer agitations against the Land Bill and the protests by ex-servicemen organisations for implementation of OROP. Opposition parties too seem to have got their act together as demonstrated in the previous session of Parliament and the monsoon session too promises to be a stormy one. The media has also redeemed itself by getting back into its watchdog mode through its vigorous focus on Lalitgate and Vyapam scandals. But none of these confrontations are ideological in nature! Moreover, there is a strong element of self interest of the familiar adversaries — farmers and ex-servicemen are protesting for themselves, the opposition parties hope to promote their own political stocks by cornering the government, while the media realises that outrage is at the heart of TRPs.

Contrast this with what the FTII agitation is all about. The students are not agitating for any tangible benefits for themselves, but for certain principles and ideals — firstly, that a premier film institute needs a Chairperson and society members who can, through the width and depth of their cinematic experience, enable it even further to become a centre of creative excellence than it already is; secondly, that no attempt should be made to inject narrow, regressive ideas and majoritarian agendas of culture and arts, into an institute of higher learning, under the garb of setting right the flaws in its functioning.

The only element of self-interest in these demands is of the enlightened variety and not the material kind. For the students don't stand to gain anything directly in terms of better facilities or career growth by pursuing the strike? In fact, if anything, their future prospects might suffer grievously if the government remains unrelenting or cracks down. That is what puts this FTII strike in a different league altogether.

Because while the rest of India either fights shy of taking on Hindutva ideology directly or, worse still, acquiesces with or supports its soft or hard versions, or fights political, partisan battles of self-interest, these 250 young Indians have shown the gumption and grit to recognise the clear and imminent dangers of saffronisation and oppose it, at the very real risk of jeopardising their careers. Could this then wake up other liberals of every hue, from the hibernation into which they had retreated the moment the BJP won in 2014, and make them alive to the fact that the penetration of corrosive ideologies and non-meritorious ideologues, needs to be opposed tooth and nail right away, in their own domains instead of waiting for the political tide to turn?

Much of it depends on the outcome of the FTII imbroglio. Perhaps the government senses that if it gets a bloody nose and has to back down, it will breach the assiduously crafted image that the BJP and RSS are an invincible and unstoppable force. In cinematic terms, people will snap out of the “suspension of disbelief” phenomena — a mesmerising effect for making the audience accept everything shown on screen, including the most implausible things —  and start scoffing at the narrative while toying with idea that the current dispensation can indeed be challenged.

That is why it is hoped that the FTII students have a Plan B in place, in case the government serves them another ultimatum. Perhaps an excellent and practical Plan B would be what the eminent film-maker Adoor Gopalkrishnan had suggested a few weeks ago — of taking the government to court on the issue of the appointments, while calling off the strike, if faced with threats of expulsion.

For while this is too important an ideological battle to compromise on,  a good backup plan for the hero is the essence of all good story-telling, if he is to escape and emerge triumphant in the end. Who knows that better than film-makers?

— The writer, an author and film-maker, is an alumnus of FTII.