Gau rakshak economy at root of lynching : The Tribune India

The architecture of cow politics has not changed, only the bricks. At the time of the videographed murderous assault (April, 2017) on Pehlu Khan in Alwar, Rajasthan, the state was ruled by the BJP, and now at the time of the acquittal of the charged thugs (August, 2019), there is a well-entrenched Congress government. 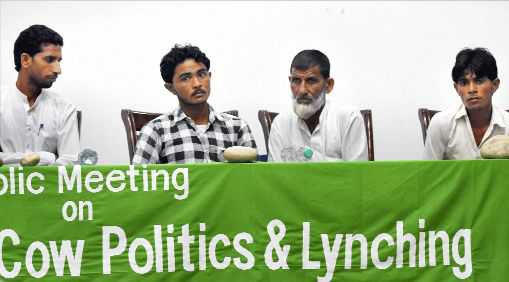 Cow vigilantism: The gau rakshak economy has become robust under the patronage of a favourable political dispensation.

The architecture of cow politics has not changed, only the bricks. At the time of the videographed murderous assault (April, 2017) on Pehlu Khan in Alwar, Rajasthan, the state was ruled by the BJP, and now at the time of the acquittal of the charged thugs (August, 2019), there is a well-entrenched Congress government. The malicious prosecution for cow smuggling, started under the previous regime, of the deceased and his two sons, continues in the present regime.

Also, nothing else has changed. Neither has the cow economy progressed beyond emotive levels to encourage the life-long preserving of the holy animal nor do the Muslims feel any safer in pursuing an occupation involving gau-vansh. This particular episode of cow lynching only reiterates a lurking connection between them: the cow must survive economically and the Pehlu Khans must be secured politically.

All along, it is projected in the case file as a slow march to death for the gentle 55-year-old Mewati dairy farmer returning home with his purchased stock from a cattle fair, on account of the beatings he received at the hands of the self-assumed interrogators, who were apparently fired by their zeal for cow protection. It is the popular cow lynching configuration as well.

The cold truth, however, is that Pehlu Khan had invited his doom by avoiding to pay the exaggerated rates of cattle transportation. He fell prey to the compulsions of the gau rakshak economy. Now, cow politics, in the face of the verdict of acquittal, has resurrected his lynching all over again. Mercifully, the presence of a Congress government in Rajasthan will make it expedient for the state to go in for an appeal in the higher court against the acquittal.

There never was a scope, in spite of tremendous Hindu sentiments, for a reverential cow economy to sustain in the modern era of agriculture and dairying. To couple with it, the steep ascendancy of the BJP in the cow belt has seen the weakening of clandestine cow economy substantially. The resultant tension has given rise to a robust gau rakshak economy under the patronage of a favourable political dispensation. Why is cow politics leading to lynching is generally understood. How the cow economy's feebleness supports the lynching is often ignored.

Two augmenting steps, one legislative and the other administrative, recently undertaken by Rajasthan and UP, ruled by the Congress and BJP, respectively, and a budgetary allocation of Rs 100 crore in the name of zero-budget farming in the latest Central budget, need emphasis to appreciate the convergent approach, the difference in the social orientation of the two political parties notwithstanding.

On August 5, Rajasthan became the first state to enact a special law, and a very stringent one too, against mob lynching. The Rajasthan Protection from Lynching Bill, 2019, provides for life imprisonment and a fine up to Rs 5 lakh in cases leading to the victim's death. It will be a non-bailable and non-compoundable offence. Earlier, in June, Madhya Pradesh, another Congress-ruled state, had approved amendment to its Agricultural Cattle Preservation Act, providing a jail term ranging from one to five years and a fine of Rs 50,000 for taking part in cow vigilantism. Both states have cited the July 2018 Supreme Court directive to the Central government to enact stern laws so as to provide “preventive, remedial and punitive measures” to deal with cow vigilantism and mob lynching. The then CJI Dipak Mishra had observed that “horrendous acts of mobocracy” cannot be allowed to overrun the law of the land.

Obviously, the Congress is pre-empting the issue because sooner or later, the Modi government would be pressed to unfold its version of the anti-lynching Bill in Parliament. In the meantime, the BJP has come out with sops touching the plinth of cow economy. A measure like zero-budget farming, drawing from unverified tall claims regarding the ‘magical’ soil enhancing qualities of the gauvansh manures, addresses only emotional realities.

This is in line with the make-believe argument of cow divinity put forward by RSS Sarsanghchalak Mohanrao Bhagwat in his one-of-its-kind three-day Delhi public lecture series, delivered in September, 2018. Himself a veterinarian, Bhagwat echoed highly presumptuous claims, like the superior health quality of the A-2 protein cow milk, ongoing scientific research and documentation confirming the special benefits of cow milk, cow-rearing as a sure route to economic emancipation for marginal farmers and, unbelievably, decriminalisation of habitual offenders through gau seva. He did not care to elaborate how all this will ensure a shift against the abandonment or slaughter of gau-vansh on becoming unproductive.

Interestingly, nudged by the worsening stray cattle menace, it is the UP CM, Yogi Adityanath, who has come out with an administrative scheme that opens up the economy riddle as well. The state under Yogi has seen the worst kind of violent outbursts in the name of cow protection, including the mob lynching of a police inspector last year in Bulandshahr. Under phase one of the Mukhya Mantri Nirashrit, Be-sahara Gau-vansh Sahbhagita Yojana, costing over Rs 100 crore, one lakh stray cattle lodged in government-run shelters will be handed over for upkeep to private caretakers, who will be paid Rs 30 per day per animal. Drafted on the model of the idle paying ‘Budhapa Pension’ schemes, it aims to generate employment for the idle rural youth, with a potential to compete for popularity among political players. Will it also lead to the growth of a healthy cow economy? Doubtful. The flip side is that in the absence of a political will to curb the gau rakshak economy, it might further enrich the gau rakshak syndicates in UP.

The cow violence, unlike rape, has not yet reached the proportion of a national crime in India. But its brazenness does promote a patronised culture of intimidation and fear across the country. Pehlu Khan’s son has vowed to fight for justice. Many organisations and public figures have lent their voice to the cause, ‘revealing the bond between memory and moral formation.’ The interconnected realities of religion and politics make Pehlu Khan’s lynching as much a story of words as of silence. Together, they weave a narrative of hope to kindle the possibility of justice.