Get the monkey off the back

The decision to cull macaques is clearly a dramatic response by the Himachal Pradesh government to defuse a situation that was turning into a public embarrassment. There are other ways to negotiate the man-animal conflict at the heart of the issue. 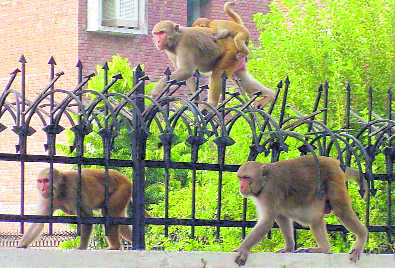 The rhesus macaques are hardy and adaptable, with a long history of living in close contact with human settlements. Apart from crop damage in rural areas, they also enter kitchens and damage property in urban settlements. Photo Amit Kanwar

Human-wildlife conflict is certainly not easy to solve. Reactive measures like culling, however, serve little purpose except to indicate a willingness to decimate wildlife in a bid to avoid public discomfiture. Culling is a drastic and cruel measure. No attempt has been made to address adequately the underlying causes  that drive wildilife-related conflicts.

“Farmers are now aware that they can shoot monkeys if they see them near their crop-fields,” said the familiar voice on the phone from Himachal Pradesh. Shaurabh Anand, the young wildlife researcher who called, has been studying rhesus macaques and their crop-raiding activities in Solan since 2014. He said that in a recent meeting in June 2016, the local farmers' union demanded that crop-raiding animals be categorised as “vermin” under India's Wildlife Protection Act for a period of at least two years. A pamphlet outlining their demands also urged the government to lift the ban on monkey export as a way to resolve human-monkey conflict problems. Listed as vermin

In March 2016, the Union Ministry of  Environment, Forest and Climate Change (MoEF), in an attempt to address the "monkey menace" had listed the rhesus macaque as vermin for a period of six months, within the municipal city limits of Shimla. Despite protests by wildlife conservationists, in May 2016, MoEF notified rhesus macaque as vermin in 38 tehsils of 10 districts of Himachal Pradesh for a period of one year. In practice, this has meant that farmers in districts like Solan are approaching the District Collector's office to provide them with guns and ammunition at subsidised rates to shoot rhesus macaques.

Bihar, Maharashtra, Uttarakhand, and Telangana have also declared species such as nilgai and wild boar as vermin so that they can be killed by local people or even shooters from other states. These decisions spurred by the Union Ministry have triggered public spats between ministers and debates among conservationists and others over the rightness or wrongness of the orders.

The culling has been portrayed as a drastic and unnecessarily cruel measure to resolve what is an unfortunate problem affecting farmers. What is the real scenario and debate about?

Crop damage or depredation by wildlife species is not new. As many studies have pointed out, when people live alongside animals, inevitably, some non-permitted sharing of resources occurs, and this has historically been a part of human lives in India and globally. The issue now is that crop damage has apparently become so high that resulting financial losses have led farmers to abandon cultivation in some parts of India. Droughts also cause economic ruin for farmers but are usually seen as an act of god, unlike animals like monkeys and wild pigs that have a visible and targetable presence.

Rhesus macaques are hardy, adaptable monkeys and have a long history of living in close contact with human settlements. Apart from crop damage in rural areas, they also enter kitchens and damage property in urban settlements, besides approaching people — sometimes aggressively —for food in public parks and temples.

Research on monkeys clearly indicates that provisioning by humans either indirectly through garbage mismanagement or directly through food handouts impacts their behaviour in many ways. For one, it reduces their natural inhibition to interact with human beings and drives them to move toward human food sources. Secondly, easy access to nutritious human food can increase their reproduction and cause aggregation of monkey groups. When macaque densities increase in cities like Hyderabad, Delhi, or Shimla, causing problems for people, the usual response has been to capture macaque groups indiscriminately and release them elsewhere, usually in rural areas that adjoin forests. This in turn increases crop-damage conflicts in these areas, prompting calls for further removal, thus creating a vicious circle.

Himachal Pradesh's attempt to cull macaques is not a new decision. In 2010, the state had declared rhesus macaque as vermin for a period of six months and permitted farmers to shoot the species at will.

This verdict was quashed by the state High Court a couple of months later, but not before over 500 monkeys were shot dead. The decision to cull macaques then, as now, is clearly a dramatic response by the government to defuse a situation that was turning into a public embarrassment. But it is unlikely to actually resolve the conflict because no attempt has been made to understand or address adequately the underlying causes that drive wildlife-related conflicts.

Many techniques have been used to resolve human-wildlife conflicts in India, including physical barriers, farm management and compensation measures, chasing animals, or sterilising or removing problem individuals. These methods have varied rates of success but should they be abandoned completely? Admittedly, we do not have sufficient data on the effectiveness of various mitigation measures to come to an informed opinion about what techniques work or don't work. For example, Himachal Pradesh initiated a macaque sterilisation programme in 2006 in an effort to control population numbers and thereby mitigate conflict. Since 2006, a total of 104,422 macaque individuals has been sterilised. According to the Himachal Pradesh Forest Department website, 51.4 per cent of the macaque population in the state has been sterilised and macaque numbers are dwindling. If this is true, then it is not clear why the state government feels an urgent need to cull macaques.

Appropriate mitigation techniques are only one part of the solution; it is also critical to invest in research to understand how various actors affected by conflict interact with each other. Often, there is a lack of even basic information, such as how much economic damage does a wildlife species actually cause? Additionally, it is important to understand how farmers actually view conflict species.

Studies on crop-raiding monkeys in Africa and Sulawesi show that although farmers were informed that rats were found to actually cause more crop damage than monkeys, they still blamed monkeys, as the latter were more visible than rats. A 2008 study by Kalpavriksh in Uttarakhand showed that farmers nurtured a greater sense of grievance against the Forest Department than they did against rhesus macaques. This was because they felt that the Forest Department had not paid sufficient attention to their opinions about how to deal with crop damage by macaques. A more proactive and less destructive approach would be to understand the genesis of the situation, carry out mitigation with continuous monitoring and scientific research, and be responsive to the voices and needs of various affected people. Despite all our problems, India has had an enviable history of wildlife conservation. We should not be in a rush to give that up.

Sindhu Radhakrishna is a Professor at the National Institute of Advanced Studies, Bangalore & T. R. Shankar Raman is a scientist with the Nature Conservation Foundation, Mysore.