Getting around the trade war : The Tribune India

Getting around the trade war

CHALLENGED by Donald Trump’s trade war, will Asia’s outstanding rivals, India and China, come closer as they face it? During his election campaign in 2016, Trump pointed a finger at China and India for stealing the most jobs from Americans. 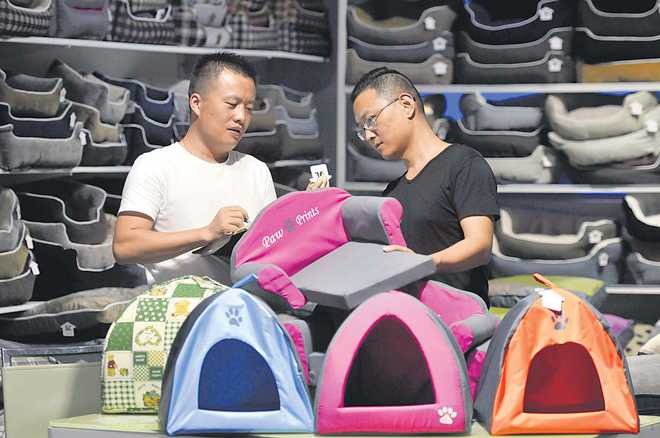 CHALLENGED by Donald Trump’s trade war, will Asia’s outstanding rivals, India and China, come closer as they face it? During his election campaign in 2016, Trump pointed a finger at China and India for stealing the most jobs from Americans. So, no one should be surprised at his raising tariffs on Indian and Chinese exports to the US, or reducing the number of visas for Indians (and their spouses) wanting to work in the US.

Overall, the US buys more from China than from India: 22 per cent of its imports come from China, 2.1 per cent from India. About 19 per cent of China’s exports go to the US and 16 per cent of India’s. On the whole, India could be affected less by the trade war than China.

China’s first response to Trump’s brand of protectionism was to declare that it would open up its economy. What that has meant for India is that Beijing has lowered duties on many Indian imports and removed them for 28 drugs, including anti-cancer drugs. In return, India has removed tariffs on over 3,000 goods from China and other Asian countries.

The state-steered Global Times sees the US’ continued promotion of the “America First” policy and “trade-stick tactics” against many of its trading partners, including China and India, creating a situation necessitating more cooperation between the two countries. China claims that its progress, reflected in its Belt and Road Initiative (BRI) and its interest in upgrading India’s poor infrastructure, could provide “massive opportunities” to India. The China-initiated Asian Infrastructure Investment Bank has in the past two years given India nearly 30 per cent of its funds, most of which were allocated for infrastructure development in electricity and transportation. Beijing thinks that “[our] consensus and cooperation outweigh differences and competition”.

As China imposes tariff barriers to US products, Indian exports to China are expected to increase. But how realistic is this optimism? India’s imports ($61 billion) from China were six times its exports ($10 billion) in 2016-17, and its trade deficit with China increased more than two-fold from $16 billion in 2007-08 to $51 billion in 2016. Moreover, restrictions on market access in China and the lack of manufacturing capability in some technology items imply that India may not be able to export much more technology to China and benefit much from a US-China trade war.

At another level, China is the largest buyer of US’ soya beans. If China bans soya bean imports, could India step in? Not necessarily. India exported less than the equivalent of 1 per cent of China’s soya bean imports from the US last year.

Add to that the fact that cotton has been one of India’s leading exports to China, which is the largest market for India’s cotton yarn. But competition from Vietnamese cotton led to Indian exports halving from $2.2 billion in 2013 to $1.1 billion in 2016. This amounted to a decline of 67 per cent since 2011-12. With the trade war, China has imposed a 25 per cent tax on US imports of cotton. It is unclear whether this would see a rise in India’s cotton exports to China.

The competitive prices of Chinese products in the Indian market also contribute to India’s trade deficit with China. Chinese imports cost less than Indian goods. For instance, India imported more than 80 per cent of all its solar panels from China in 2016-17. The Chinese ones cost between 10 to 15 per cent less. Meanwhile, India’s software services companies struggle to get access to the Chinese market, even as Chinese imports manage to dominate India’s power equipment market.

Some of India’s problems have domestic origins. Modi’s “Make in India” initiative, aimed at promoting local manufacturing challenged by low-priced imports from China, has not taken off. Furthermore, demonetisation destroyed many small Indian businesses and India even ended up importing figurines of Hindu gods because of China’s efficient production methods. How Modi’s reforms — demonetisation, GST, and his attempts to make the Aadhaar card compulsory — will achieve these prerequisites for progress is anyone’s guess.

Last year, China’s attempt to build a road in Doklam plateau provoked a showdown between two armies. Tensions eased but they will remain because of China’s “historical” claim to parts of Northeast India.

On another plane, India has not supported or joined China’s Belt and Road Initiative (BRI). And it is concerned about China’s ambitious global infrastructure plans, which have borne fruit in projects in the Indian Ocean. The BRI projects include the building of ports and roads from Myanmar to Sri Lanka and Pakistan. What worries India most is the $60 billion China-Pakistan Economic Corridor, which runs through the disputed Pakistani-occupied Kashmir. New Delhi claims the region as Indian turf.

Whether the tariff reductions on both sides will be largely symbolic or strengthen trading ties remains to be seen. Add to that the fall in Indian exports and lack of investment in manufactures over the last four years — and it is obvious that neither Trump’s trade war nor the old friction with China are entirely to blame for India’s trade difficulties. They are rooted in some domestic economic policies which have slowed down its progress. And given China’s challenge to India’s territorial integrity, the border dispute will continue to divide them. Trump’s trade war might prompt India and China to search for a common ground, but a big question mark hovers over the chances of real improvement in their bilateral trade and political ties.