The Tribune, while explaining the importance of the first-ever pan-India protest against the British in the context of the Rowlatt Act, drew a picture of the emerging leader of the Indian national movement in an editorial on April 6, 1919: ‘…Mr. 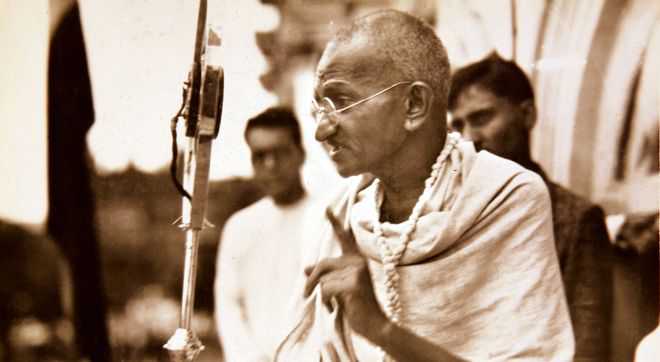 Pale shadow: Gandhi is now being reduced to a waste management metaphor.

The Tribune, while explaining the importance of the first-ever pan-India protest against the British in the context of the Rowlatt Act, drew a picture of the emerging leader of the Indian national movement in an editorial on April 6, 1919: ‘…Mr. Gandhi, in whom, as Mr. Gokhale once said, Indian humanity has reached its perfection, whose knowledge of his people is profound and who is probably the most popular — as he is easily the most saintly — of Indian leaders….’ This was written hardly four years after Gandhi returned from South Africa, when he was untested and India was still coming to terms with his quirky ways. He lived about three more decades, shaping the idea of India, fighting innumerable, excruciating battles within and without, evolving from an upholder of the varna system to an anti-caste reformer and changing the mainstream society along with him. But the editorial of 1919 more or less portrayed what he meant to most Indians for many decades more.

The greatest contemporary critics of Gandhi were those who collaborated with the British — Mohammad Ali Jinnah, VD Savarkar and Dr BR Ambedkar — to create identity politics and tear apart the fragile fabric of a nation Gandhi was painstakingly weaving. Of these three critics, Gandhi respected Ambedkar the most and understood his angst the best, finally ensuring that he was made the chairman of the drafting committee of the Constitution. But for Gandhi, even the image of Ambedkar in public consciousness — as modern India’s lawgiver sculpted in stone with the Constitution in hand — would have simply been that of a member of the Viceroy’s Executive Council. Gandhi shaped his rivals. Jinnah and Savarkar were the complete antithesis of Gandhi, vying with each other to please the Empire and create separate Muslim and Hindu nations. No wonder their parties collaborated to be in power together in Bengal, Sindh and the North West Frontier Province, when real patriots were in jail. Yet, Pakistan was not Jinnah’s victory, but born of British strategic exigencies.

Now, a century after the editorial extolling Gandhi as the perfect specimen of Indian humanity, on his 150th birth anniversary, Gandhi seems to have lost the battle against the politics of hatred. The idea of Gandhi has changed and a sizeable section of Indian society may not agree with that old editorial any longer. Why? The primary responsibility lies with the so-called Gandhians, the ones who wore the topi — like ND Tiwari in a sleaze video — making it the greatest symbol of hypocrisy, untruth and unbridled greed for power. They even made Gandhi’s killers acceptable. When Indira Gandhi issued a postage stamp in Savarkar’s memory in 1970, she was putting the stamp of approval on his ideology and his role in the conspiracy to kill Gandhi. Three decades later, with Vajpayee as PM and Advani as deputy PM, a parliamentary committee comprising Pranab Mukherjee (Congress) and Somnath Chatterjee (CPI-M) put up the portrait of Savarkar in the Central Hall of Parliament, mocking Gandhi inside the temple of Indian democracy.

So, when the current Home Minister is photographed with Savarkar’s portrait in the backdrop, it does not come as a surprise, for Gandhi was defeated and his politics of truth, compassion and nonviolence was replaced by his murderer’s ideology long ago. Hindutvavadis’ derision for Gandhi was always ostensibly over nonviolence. But that can’t be true because their forefathers never took up arms against the British — even Savarkar got Madan Lal Dhingra to pull the trigger and go to the gallows. Their real grouse was Gandhi’s interpretation of Hinduism and his sway over the Hindu masses. They termed it effeminate and cowardly, imagining a valorous variety instead, even as they served the British. But Gandhi’s politics of nonviolence, apart from the moral power it exerted over the enemy, was also an antidote to the British getting uniformed Indians to kill poorer Indians; something the Maoists still keep doing.

Apart from the Savarkarites, the biggest critics of Gandhi are the Maoists and their overground, well-heeled supporters. While the Hindutvavadis have tried to appropriate Gandhi of late, trying to reduce him to a waste management metaphor, the so-called left radicals have appropriated Ambedkar and are using him to attack Gandhi and thereby delegitimising the post-colonial Indian state. This phenomenon began with the economy opening up and foreign capital funding beauty pageants and literary festivals. The new India of Miss World and Booker titles and the new era of Aishwarya Rais and Arundhati Roys threw up a newly-imagined past, where Gandhi is the villain and Ambedkar the hero. The creation of this binary conveniently used a British tool — separate electorates to divide society — camouflaging it as Ambedkar’s idea. Thus the Poona Pact and Gandhi’s fast unto death, which defeated the British ploy to create caste nationalities after constructing religious nationalities, were turned into a fight between Gandhi the oppressor and Ambedkar the victim. The memory of Gandhi the manual scavenger, making the upper castes clean their own toilets, was erased by this new generation of activists.

Worse, Gandhi — who adopted a girl from an ‘untouchable’ caste, married off another (who became the only Scheduled Caste woman member of the Constituent Assembly) in his Wardha ashram, and who wanted Hinduism to die if untouchability were to remain — is now being labelled a casteist. This hatred for Gandhi can only be triggered by a strange apathy towards post-colonial India by legatees of the old colonial elite or the colonially-empowered groups. The Hindutva identity, which took shape in the 1990s, should be understood in the context of Gandhi getting delegitimised by people using his idiom to manufacture caste and communal identities. The new Savarkarite Hindu rashtra could only have been built on Gandhi’s grave.

Lockdown ends on midnight of May 31