Hinduism at risk from RSS 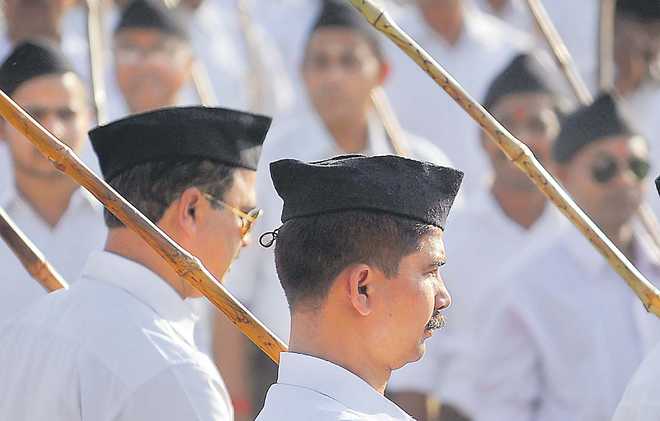 UNDONE: There was pride in the chaotic diversity that was Hinduism.

HINDUS need to worry. Not about Muslims being beaten up or killed on the pretext of cow smuggling or slaughter, or Christians being attacked on the pretext of conversion. Hindus need to stir out of slumber because Hinduism is in peril. It is not threatened by Muslims. For the last 150 years, Hindus have been led to believe that they would be drowned by the rapidly increasing numbers of Muslims. Not by Christians too, for they have not been able to convert all other Indians to a religion of foreign origin. Instead, there is a clear threat now of Hinduism being taken over by an organisation called the Rashtriya Swayamsevak Sangh. Hinduism, a religion that is a way of life, as its adherents like it to be known, is now in the hands of organisations and people who want to transform it into an ideology of dominance over populations, which are seen, feared and abhorred as ‘others’.

Hindus better be warned. The pictures emerging from West Bengal should act as a wake-up call for them. This year, processions with swords and other lethal weapons were taken out in different parts of Bengal on the day of Ram Navami led by various affiliates of the RSS. Children, girls, women, men marched with these weapons chanting slogans in Hindi. The streets and lanes of Kolkata, Birbhum, Burdwan, Nadia, Malda, Midnapore and Darjeeling reverberated with the slogans of Jai Shri Ram and Har Har Mahadev. The state president of the BJP, who himself was seen flaunting a sword while leading an armed procession, claimed this as a mark of new Hindu upsurge in Bengal. He also said nobody could stop them from carrying the weapons that 33 crore Gods and Goddesses of Hinduism carry.

Since when has Ram became a major figure and Ram Navami a major festival in Bengal? Hindi slogans in Bengal? So, has the proud Bengal finally given in to Hindi-Hindu nationalism? How did Bengal allow the slogan of Na Durga, na Kali, keval Ram aur Bajrangbali? I am not advocating an anti-Hindi plank, but it was shocking to see the land of Durga asking her to make way for Ram.

A friend from Patna informed me that this year the Mahaviri Akharas carried saffron flags instead of the red ones typically associated with Hanuman. We saw Yashwant Sinha, a former Central minister and a BJP leader, going all the way to Hazaribagh and creating a law and order problem, just to force the administration to allow a Ram Navami procession to pass through a street populated by Muslims. There was no practice of Ram Navami processions taking that route for the last six decades. This time it was the BJP which decided on behalf of the Hindus of that area that procession would not proceed until the Muslim populated street was made available to them. So, is Ram Navami only a tool to dominate and subjugate Muslims, only this very worldly aim?

Last year we saw kanwarias on the roads of Delhi with the Tricolour pinned to their saffron cloak. Trucks accompanying them were also draped with the Indian flag. It was not that the kanwarias, who claim to be devotees of Shiva, were suddenly overcome by the emotions of nationalism. It was a planned takeover of the nearly fortnight-long festival by the RSS using the national flag. Who would refuse adorning the national flag? So, a God who is known as trilokdhari was nationalised. It was not difficult to miss the symbolism of the Tricolour being as an add-on to saffron.

For long, the RSS has also tried to depict Sikhism as an offshoot of Hinduism, only to retreat when snubbed by the Sikhs but has not given up. The RSS and the BJP tried it in Kerala, the land of Onam, to dislodge Bali and enthrone Vamana in his place. On the occasion of Onam, it asked people to celebrate Vamana Divas instead of paying homage to Bali. That it could not succeed this time should not make us ignore the fact that it felt emboldened enough to challenge an age-old religious tradition rooted in the soil, by proposing a new and more ‘Aryan’ symbol and get away with it.

The media took note of the distinct change in the Gudi-Parva in Maharashtra this year. It reported that the traditional Maharashtrian new year bore a distinct nationalist flavour. Was it as spontaneous as it was portrayed?

Saffron and the Tricolour go well together, is what the RSS is trying to convince Hindus. One can see the RSS stamp on all religious festivals and occasions. The RSS, in creative ways, is suggesting Hindus how to be a true Hindu, and is being accepted.

A gradual Hinduisation of festivals of other communities who live alongside Hindus is taking place. One can see Sarhul, the Adivasi festival, being slowly given a saffron turn in Jharkhand. The RSS seeks to transform the folk imagination of the eastern part of UP by the overthrowing of Ghazi Mian, a cult figure among Hindus and Muslims both, by  persuading Hindus they cannot revere a Muslim and it is Suhel Dev they should celebrate who was defeated by Ghazi Mian.

We used to take pride in the chaotic diversity that made Hinduism a riddle for many. It was not a monolith, it did not need a central book, was not chaired by only one God-figure. There did arise insecurities, and, from time to time, a need was felt to discipline and streamline its unruly multi-faceted and multi-directional character, but all attempts to homogenise it failed. Even Vivekananda, the most powerful modern Hindu monk and a Kali devotee, did not attempt to modernise it by erasing its diversity. Even Gandhi gave up his temptation of making the Gita the book for the Hindus.

Krishna is not celebrated as a warrior, Ram never in his balroop (child-form). Shiva is destroyer but is always seen as a lover and giver, a carefree God. Now, all of them have started resembling each other. All of them now look as if they have been afflicted with a new-found nationalist aggression. If all Hindu festivals become one and get reduced to a particular variety of Indian nationalism, it would spell the end of Hinduism as we have known it for millennia. Moreover, now all of them would also have been deployed in an anti-Muslim and anti-outsider campaign.

It was Savarkar, who despised this paganism, who coined the term Hindutva, which was not a description for a loose Hindu dharma but  denoted his kind of nationalism. It was usurped by the RSS. Later, the Supreme Court confused Hindutva with Hinduism. Hinduism was never ‘a’ way of life, it is many ways of life. The judgment of the Supreme Court, by turning many into one, did a huge disservice to it. Hindutva suffers from a majoritarian nationalist anxiety. We see that anxiety spreading to all Hindu traditions. It is urgent to cure it of this malady and restore it to its earlier playful state. It needs rescuers, urgently.